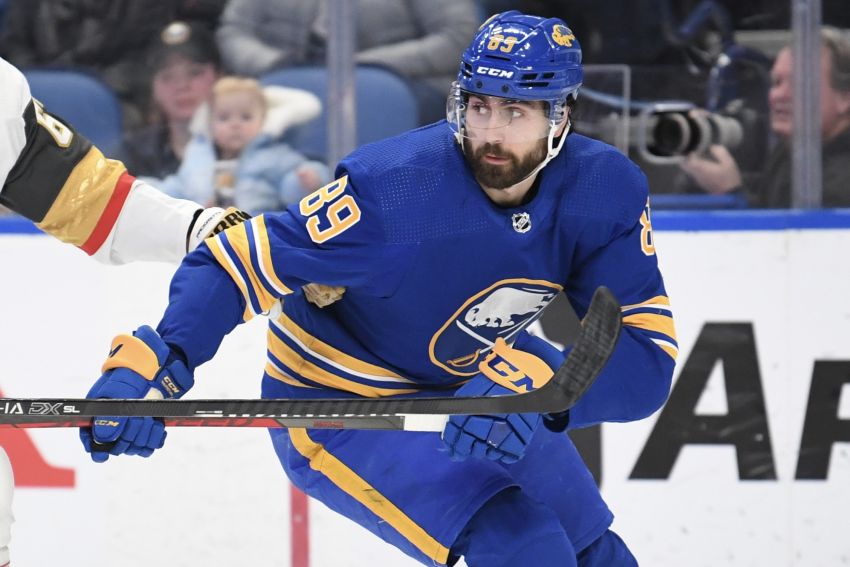 BUFFALO – Monday’s thrilling 6-5 win, a game in which the Sabres roared back and erased a 4-0 second-period deficit against the Chicago Blackhawks, ranks as one of their most exciting and significant victories of the last decade.

It marked only the fourth time in franchise history and the first time since Jan. 21, 1989 the Sabres trailed by four or more goals and won a game.

How much have the Sabres grown over the past 12 months? Well, a year ago Tuesday, they suffered the final loss of their embarrassing 18-game winless skid, blowing a 3-0 lead and falling 4-3 to the Philadelphia Flyers.

“Even at 3-0, I just felt we have a chance in this game,” said Granato, whose Sabres host the Winnipeg Jets tonight at KeyBank Center. “We still have a chance. Just, let’s not get all worked up here. There’s lots of game to go. We were one step behind our own pace, and … we were doing it to ourselves, I felt. We just didn’t acclimate and get into the game yet.”

Tuch said when the Blackhawks went up 4-0 early in the second period, the Sabres refused to hang their heads.

“There was no feeling sorry for ourselves,” said Tuch, who tied Monday’s game with 2:14 left in the third period. “There was just, ‘Hey, you know what, it didn’t go our way, let’s just work on this one goal at a time, one shift at a time.’”

March has become the Sabres’ most compelling month in a long time. Each of their eight wins – they’ve consistently showcased poise and responded to adversity – holds significance.

They’ve beaten heavyweights, thrived on a national stage and won in hostile environments.

“We’ve got a really special group,” said Sabres center Tage Thompson, who scored Monday’s winner with 10.6 seconds left in the third period. “I think people outside the locker room are starting to see it. It would have been very easy for us to fold the tent after the first period, just kind of pack it in and give up. But our guys in the room like to compete for each other. We take a lot of pride in the culture we’re building and what we want to be in the future.

“I think we’re trending in the right direction and that game was just a product of work. It wasn’t a pretty game, but good teams find a way to win and we’re on our way to being a really good team.”

Monday’s triumph, the Sabres’ first in Chicago since Jan. 10, 2007, was also Granato’s first game in his hometown as an NHL head coach.

“I told the team after, I have lots of family here that I’m going to run and see before we hop on a plane,” Granato said. “But really … it was all about getting in here and finding a way to win a hockey game. I will tell you with all honesty, I love Chicago, it’s where I grew up. But as I said over the summer when there were other job openings, I wanted to be in Buffalo. And I told our players that after the game. I feel like we all belong in Buffalo and this was huge for all of us.

“For me, obviously, I thanked our group for that effort because it made it special for my family. But for me, it felt like another win with our guys and that trumps anything right now. It just does. These are the guys you wake up and you go to work with every day. To immerse in that is phenomenal outright. And then the side note for me is it happened to be in Chicago.”

Thompson broke his stick scoring Monday’s winning goal, and he was skating back to the bench when his one-timer bounced off the end boards and deflected in off goalie Kevin Lankinen.

“Before I knew it went in, I was pretty upset, yeah,” Thompson said. “It was a good opportunity there, one-timer on the power play. Pretty unfortunate your stick breaks, but not when it goes off the end wall, off their skate and in. I’ll take those bounces.”

Thompson said he learned he scored when heard the bench “going nuts.”

“I turned around and saw them chasing me down,” he said. “Yeah, I had no clue.”

Notes: The Sabres beat the Bruins 6-5 in overtime Jan. 21, 1989 in Boston. They hadn’t trailed by four or more goals and won in regulation since they rallied from five goals down to beat the Bruins 7-6 on Feb. 23, 1983. … Thompson’s goal was the sixth-latest go-ahead score in franchise history. … The Sabres had Tuesday off.