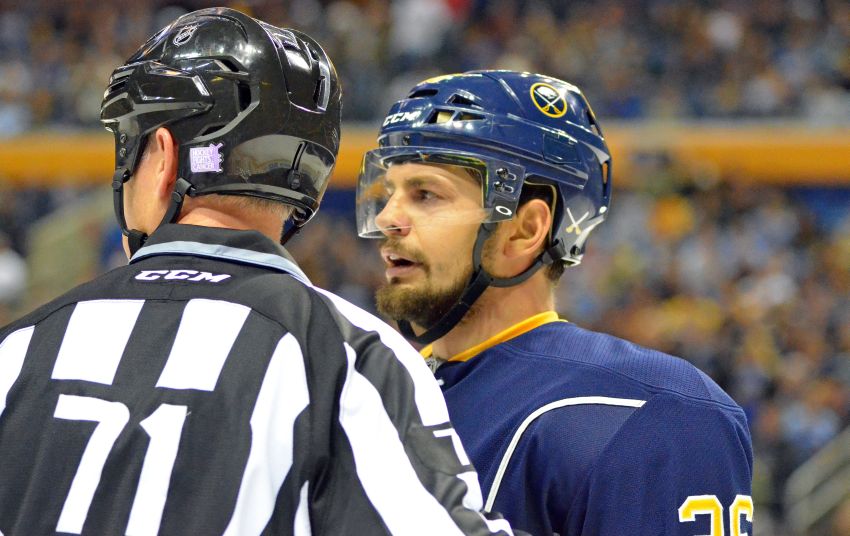 BUFFALO – The Sabres’ surprising decision to waive Patrick Kaleta, general manager Darcy Regier said Saturday, could give the hard-hitting winger an opportunity to “redesign his game” in Rochester.

If Kaleta, who’s been suspended twice in his last 21 games, clears and begins his first AHL stint since 2007-08, he has “a significant amount of work that he will have to do,” Regier said.

But the Sabres couldn’t let Kaleta, fresh off a 10-game ban for hitting Columbus’ Jack Johnson in the head Oct. 10, try to repair his game at the NHL level.

“When we talked about it internally, if it was with us, it had to take place in Rochester,” Regier said prior to the Sabres’ 6-3 loss to the Anaheim Ducks before a capacity crowd of 19,070 fans inside the First Niagara Center.

Regier said the Sabres tried trading Kaleta but found no takers. It’s “50-50” the 27-year-old passes through by noon today, he said.

Given the NHL’s crackdown on headshots, the Sabres needed to make a statement.

Kaleta, who’s been suspended four times in four years, and tough guy John Scott have recently earned the ire of critics and the league for giving headshots.

Many observers have pegged the lowly Sabres as an out-of-control team.

“Part of (waiving Kaleta) is to help the organization, certainly, to put the organization in a position to be able to play and compete,” Regier said. “We don’t want to be under the thumb of the National Hockey League, and I think we are a little bit.”

Kaleta has changed over the years, Regier said. However, he feels the league’s changing faster and targeting offenders more frequently.

Regier has asked former Rochester coach Randy Cunneyworth, who the Sabres just hired as a pro scout, to work with the Angola native to develop a new style.

“I have no question about his ability to do that,” Regier said about Kaleta. “I really do believe he can change.”

Regier added: “Part of the development in Patrick’s game is going to come from playing more hockey in your shift. What I mean by that is you have to get more involved in other areas.”

Cunneyworth’s job, Regier said, has “nothing to do” with coach Ron Rolston’s status.

The rebuilding Sabres are a wretched 2-13-1, have a league-low five points and haven’t won at home yet.

“We get scored on (and its), ‘Oh my God, now it’s happening again,’” a disgusted Sabres defenseman Henrik Tallinder said. “And they score another quick one. Come on, this is the NHL.”

It appeared Kaleta would be returning to the lineup Saturday. He served his final game Thursday and had been practicing.

The Sabres had to make a roster move to activate winger Corey Tropp from injured reserve. But waiving Kaleta, a high-energy player on a team severely lacking oomph, didn’t appear to be an option.

Shortly after noon, the Sabres announced they had waived Kaleta, whose contract runs through next season.

How did he handle the news?

“He took it professionally,” Regier said. “But he’s a heart-and-soul guy and he’s hurt, and I understand that.”

“A lot of people can say I haven’t changed, but you can tell that they haven’t watched the team then,” he told the Times Herald. “People that have watched the team have seen me change over time. It’s just as simple as (I now play the) penalty kill. That’s it.”

“It’s tough,” Myers said. “Patty’s a guy … you love having around, just for the energy and the type of guy he is off the ice. It was a tough day to figure that out. I’m confident Patty’s going to be back.”

Kaleta has 27 goals, 51 points and 506 penalty minutes in 306 NHL games. He has a $1.25 million salary this season. Kaleta played 87 games with Rochester under Cunneyworth earlier in his career.