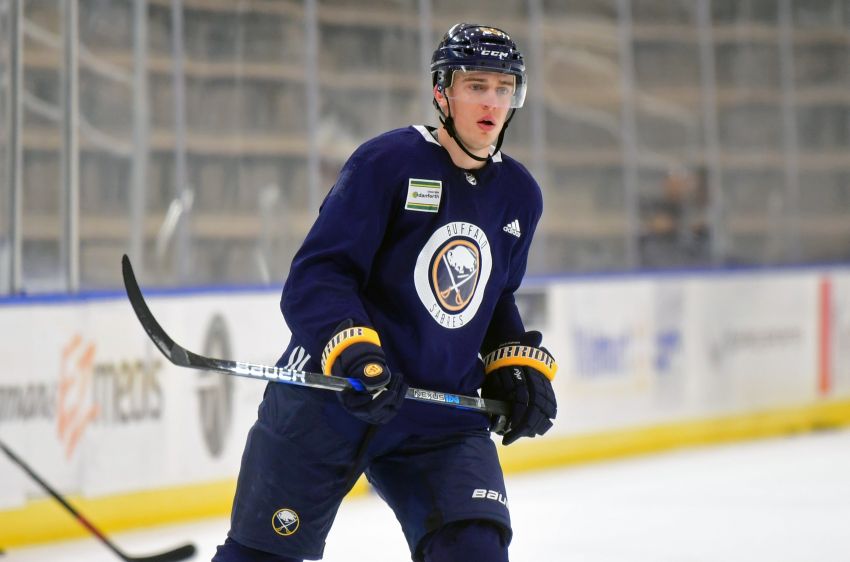 BUFFALO – Right now, the revamped Sabres blue line that has received so much attention for its puck-moving abilities is missing some key pieces.

Just three days before the season opener, Zach Bogosian and Jake McCabe are sidelined. The Sabres still have nine defensemen in training camp, a number that might shrink in the coming days.

So, could the Sabres potentially have the defense corps they envisioned all summer together for Thursday’s tilt against the Montreal Canadiens?

“He seems to be in a good spot,” Housley said Sunday inside HarborCenter.

Meanwhile, McCabe, who’s week-to-week with an upper-body injury, is “making great progress,” said Housley, who hasn’t ruled the American out of the opener.

Still, Scandella has been practicing most days.

Those defenders, Housley noted, are “in a good spot.”

For now, the Sabres are using some interesting defense pairs. On Sunday, Rasmus Ristolainen skated with Nathan Beaulieu, Scandella worked with Josh Gorges and Matt Tennyson and Victor Antipin skated beside Justin Falk.

Ristolainen, as the No. 1 defender, averaged a whopping 26 minutes, 23 seconds of ice time a game last season, a number Housley wants to trim.

But can Housley take minutes from Ristolainen and other top defensemen if the Sabres begin the season banged up?

“I’d like to see him to get 22 to 23, 24 (minutes),” Housley said of Ristolainen. “Maybe he’s not accustomed to doing that. But I think if you look over the long haul, he’ll be fresh in February, and hopefully we’re in a position where we need that energy.

“There’s going to be the odd time they’re playing high minutes, they’re minute-munchers. But I think to keep them fresh in the system and style we want to play involves that D getting in the attack. We want to keep those minutes comfortable in a position we can do that.”

With the injuries, Falk and Tennyson, two depth defensemen, have impressed Housley enough to stick around.

“Falk’s been terrific,” Housley said. “He’s provided us with a physical element to his game, willing and able. He really understands our system jumping up in the play, which maybe he’s not accustomed to. But I really like what he’s brought.

“Matt’s been terrific. He fits into our system really well, making a good first pass, has a really good stick in the D-zone. Those are big reasons they’re still here with us.”

But if Bogosian or McCabe heal soon, Faulk or Tennyson could be sent down (both must clear waivers).

“They’re going to be tough decisions,” Housley said. “All of those guys can play. They’ve had a great camp up until this point, in the preseason games they’ve had an impact.”

When the Sabres’ regular defensemen finally play together, Gorges said he expects they will “move pucks, get involved, create.”

“It’s kind of the way the league is going,” he said. “It’s hard to score goals in this league, and it’s hard to score five-on-five. You look at what they’re trying to preach within our systems, and then you can see the guys they went out and acquired … you need D that can get up in the attack and be that second wave or even at times lead the rush and get involved and pull guys back.”

“It’s a long year – new system, new coaches, new players,” he said. “It takes a little bit of time, but I think we are ready for it.”

Winger Nick Deslauriers and defenseman Taylor Fedun, who were sent to the AHL Saturday, cleared waivers Sunday, meaning they can report to the Rochester Americans. The Sabres also assigned winger Justin Bailey to the Amerks with them.

Meanwhile, Jason Pominville shifted to the right side with center Sam Reinhart and Zemgus Girgensons. Benoit Pouliot moved up to the left wing beside center Ryan O’Reilly and Kyle Okposo.