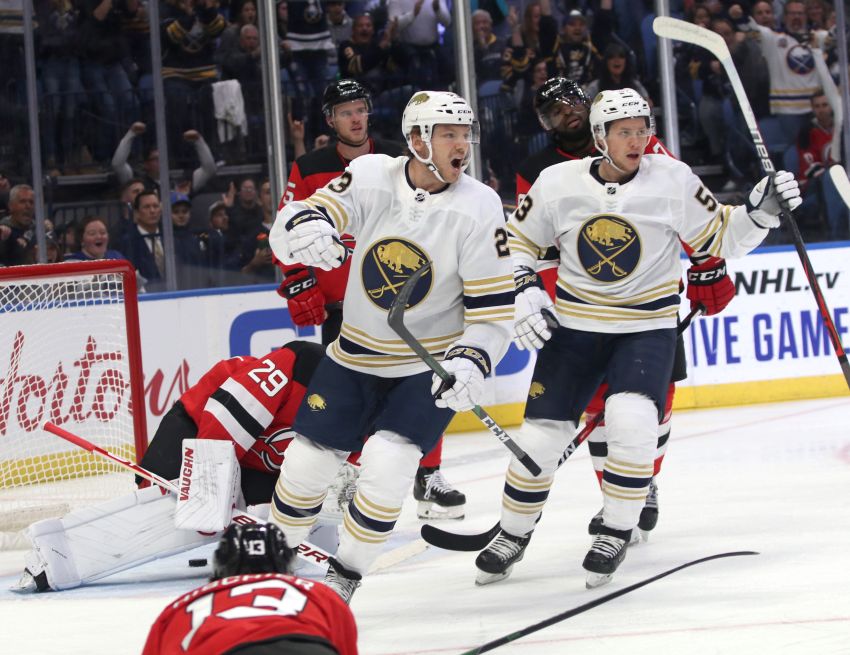 BUFFALO – One by one Rick Jeanneret introduced them, 15 in all, including some of the greatest names in Sabres history.

Gilbert Perreault, the most iconic name, received a rousing standing ovation from the capacity crowd of 19,070. The fans roared for Danny Gare and Jason Pominville, two of the most popular players in franchise history.

Before the Sabres started Saturday’s 7-2 annihilation of the New Jersey Devils, they kicked off the home portion of their 50th anniversary season by honoring captains from their past.

For a team that has ranked among the NHL’s laughingstocks for a long time, it served as a stark reminder the Sabres have a rich history.

KeyBank Center has ranked among the league’s quietest venues for years. An eight-year playoff drought, the longest active streak, will do that.

But on Saturday, it rocked from the moment Jeanneret walked on the ice until the final buzzer.

“The pregame ceremony was tremendous,” said Sabres captain Jack Eichel, who joined the others who wore the ‘C’ at the end of the ceremony. “Just a moment that I’ll never forget, going out there with some of those guys and being able to stand in the same circle as them was just a tremendous honor and an amazing moment.

“I think we were all pretty amped up to get the game going.”

The Sabres gave their fans plenty to cheer about, jumping on the Devils and never letting up.

“We played a pretty blue-collar game, just ran them out of town,” Sabres winger Kyle Okposo, who scored early in the second period.

Sabres rookie Victor Olofsson scored the first of his two power-play goals 2:56 into the contest. Eichel followed with another power-play goal at 17:26.

After New Jersey scored 37 seconds into the second period, Okposo, who has looked terrific so far in his fourth-line role, restored the two-goal lead.

“The goal from Okie was critical at that point in the game,” Sabres coach Ralph Krueger said.

Eichel said: “Okie’s goal was a huge point in the game. No panic on the bench.”

As the goals piled up, the raucous crowd started counting them and demanding another.

“It was great to see them react the way they did,” Eichel said. “The amount of energy that was in the building tonight was tremendous. We felt it on the bench. We were talking about it. It’s a special place to play when we’re playing like that and the crowds into it.”

The Devils, meanwhile, melted down and started taking runs at the Sabres.

“Everybody will remember the goals, but I thought the physicality and the way we stood up and the way worked for each other was team sacrificial-like,” Krueger said. “We can build on that. Overall, the noise was loud and the building had a lot of fun.”

There are, of course, 80 games left, but this edition of the Sabres has looked darn impressive. The Sabres are 2-0 for the first time since 2012-13.

Fresh off Thursday’s 3-1 win over the Pittsburgh Penguins, they played another complete game.

“I feel like we just kind of kept our cool and played the same way throughout the 60 minutes,” Olofsson said.

“(It’s) the way we’re moving the puck, the way we’re staying in motion,” Krueger said. “We’re not stuck anywhere in one spot, and the way everyone’s filling the lanes. We’re lethal there right now.”

One thought on “Sabres honor past captains, annihilate Devils before raucous crowd”