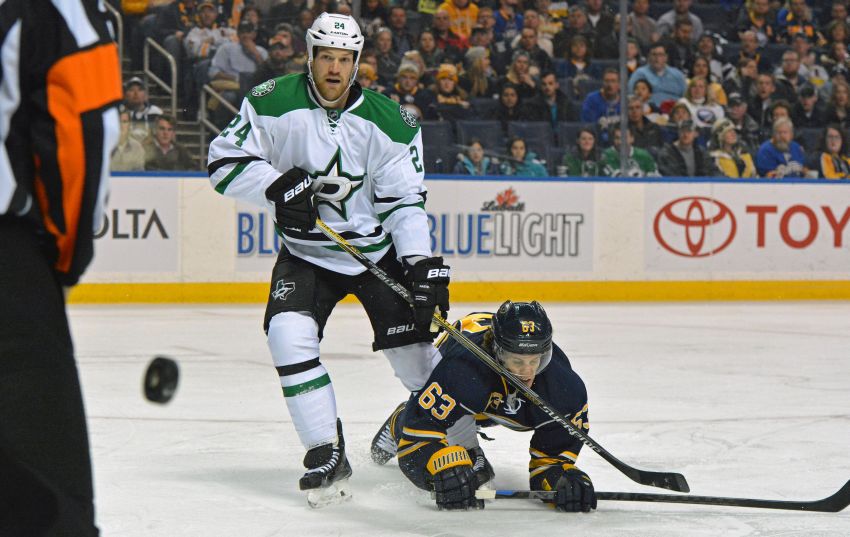 BUFFALO – The Sabres often possess an uncanny ability to weather a fierce storm. Sure, opponents have pummeled them regularly this season. But they can also take a beating and come out on top.

The Dallas Stars dominated early in the Sabres’ 3-2 win Saturday, pumping shot after shot on goalie Jhonas Enroth. Just 18 seconds in, they left Tyler Seguin open, gifting a prime scoring chance to the superstar. Enroth stymied Seguin, one of 15 saves he made during the opening 20 minutes.

“That was definitely a good start for me,” said Enroth, who made 38 saves. “I thought I moved over and stayed on my feet. I felt pretty comfortable right from the get-go. So I had a good feeling all game.”

The Sabres escaped the period with a 1-0 lead after Tyler Myers scored late. Tyler Ennis’ power-play goal and Zemgus Girgensons’ team-leading 14th score put the Sabres up 3-0 in the second period.

Still, this one was far from over. Like Tuesday’s 3-2 win in Montreal, the Sabres hung on late and nearly imploded.

“This was a hard-fought two points by our team,” Sabres coach Ted Nolan said.

Seguin’s power-play goal later in the second period made it 3-1. Cody Eakin got the Stars to within one 9:47 into the third, a period they outshot the Sabres 9-3 and held the puck throughout.

“We went down to three lines and really tried to hang on,” said Nolan, whose team hosts the New York Islanders this afternoon.

The win before 18,426 fans was the Sabres’ first at the First Niagara Center since Dec. 27 and just their second victory in 17 games.

“It felt nice to salute the fans again, it’s been a while,” Ennis said. “They’ve been awesome for us, they’ve been supportive.”

Ennis added: “I thought it was similar to Montreal, outplayed them for two periods. They kind of took it to us in the third period, and we needed Jhonas stand his ground and get us a win.”

Like Tuesday, the Sabres did enough to win, scoring three goals for just the fourth time in 17 games. They exploited the Stars’ weak defense and goaltending – Anders Lindback is arguably the NHL’s worst netminder – for chunks of the game.

“I don’t think the shot clock told the full story of the game,” said Sabres winger Chris Stewart, who had three assists, including a nifty backhander to create Ennis’ goal. “I know they did outshoot us by a lot, but I thought for the majority of the game we definitely had them on their heels.”