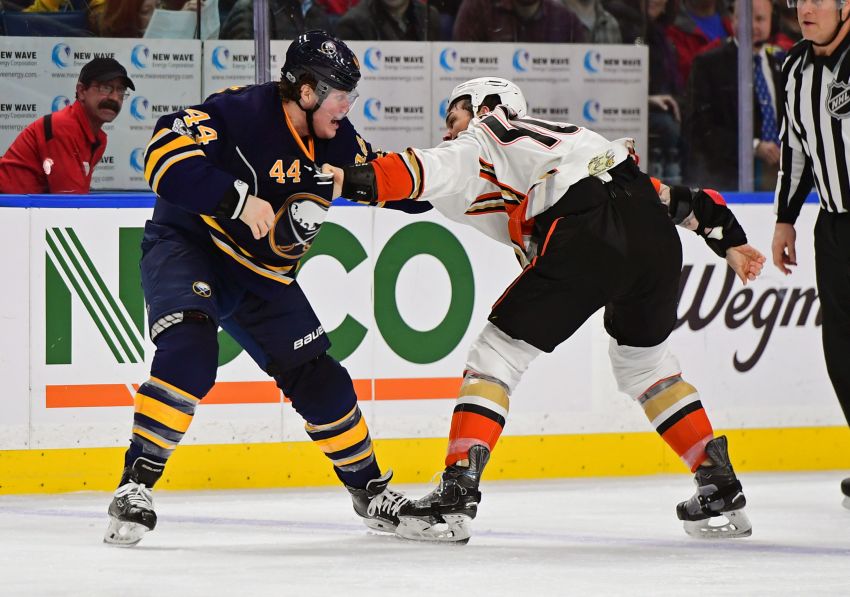 The Sabres’ top heavyweight has only fought three times in 29 appearances entering tonight’s tilt against the hapless Colorado Avalanche at KeyBank Center.

“I’ve been trying to get some,” Deslauriers said Saturday in Toronto. “I haven’t got that many fights.”

Deslauriers, 25, didn’t fight until Jan. 10, his 19th game after a knee injury sidelined him five weeks. As a fourth-liner with a limited skill set and short ice time, Deslauriers’ main job is to create energy and spark his teammates.

If Deslauriers, who considers himself a throwback, can’t scrap, his value significantly decreases. He has zero points this season and has become a regular healthy scratch in the last month.

“I know my role,” he said. “It doesn’t happen a lot. I think I still have a little bit of (the) ‘back in the days hockey’ (attitude) that I love getting in fights. It’s not an easy job. It’s a thing for me, I’m not a goal scorer. I know how to bring energy. That’s one part that I can bring.”

Luckily, Deslauriers has ignited the Sabres twice in his last four games, fighting twice. His marathon bout last Thursday with Anaheim’s Jared Boll, the NHL’s co-leader with 12 fights, was one of the league’s strangest this season.

“That was probably one of my longest ones and the most ice covered,” Deslauriers said. “Those are the ones I want to be in. I’m happy it happened.”

Deslauriers and Boll dropped their gloves above the left faceoff circle in the Anaheim zone. But neither landed a punch for about 25 seconds. Instead of just going at it, they put up their fists and sized each other up.

They finally started throwing punches at center ice. The fight ended – it was basically a draw – just inside the Buffalo zone after about 70 seconds.

“He’s a tough customer,” Deslauriers said. “I fought him once last year. It was more of a technique fight, a little bit more. It was a long one. It was good. I think it made me feel a little bit better, too.

“That’s a big test for me, not having a lot of fights this year and going against one of the toughest guys in the league. It felt good.”

“It’s kind of like a goal scorer, you score a couple of goals, you get that boost up a little bit,” he said. “That was one for me. It was good timing, too. The second period, we’ve been flat lately.”

Still, Sabres coach Dan Bylsma said Deslauriers was a “little bit worse for wear” after the fight. Bylsma scratched him the next two games before winger Evander Kane’s illness opened up a spot for Tuesday’s 3-2 win in Ottawa.

Deslauriers went after Senators defenseman Dion Phaneuf and challenged him to fight late in the first period. Their gloves stayed on, but the twin roughing penalties took one of the Senators’ best players off the ice.

Some opponents clearly want no part of the 6-foot-1, 216-pound Deslauriers, one of the NHL’s most underrated fighters. Perhaps he can’t fight regularly because he intimidates opponents.

“He switches (hands),” said Sabres winger Marcus Foligno, who has a team-high eight fights. “He’s strong. He’s smart in fights and he can definitely throw it hard. He’s a treat to watch.”

Fighting, of course, has significantly decreased over the years. The NHL averaged .60 fights a game in 2009-10, according to hockeyfights.com. That number has dwindled to .31 this season, although it’s up from .28 last season, according to the site.

He added: “Now you have to be able to play hockey and fight. You can’t just be a fighter. I think it’s going to stay like this. Let’s hope it doesn’t get less than that.”

Notes: The Sabres had Wednesday off. … How bad is the Avalanche? The league’s worst team ranks 30th in points, goals scored, goals against and goal differential, which is a stunning -73. Arizona, the second-worst team, is -44. … The Sabres are 1-10-2 on Thursdays this season.

One thought on “Sabres heavyweight Nick Deslauriers wants to fight”