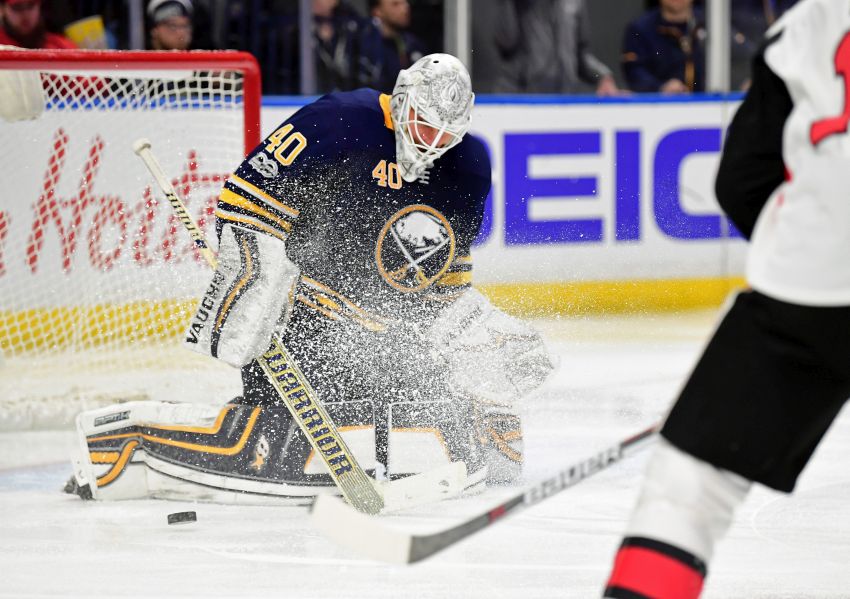 BUFFALO – The Sabres have played 42 periods at home this season, and based on their awful 4-9-1 record at KeyBank Center, the majority of them have been poor or downright awful.

In their last home outing before Tuesday’s 3-2 victory, the Sabres, like so many times this season, got booed off the ice by their surly fans.

That’s why the roar from the announced crowd of 17,454 following a three-goal second period against the hapless Ottawa Senators felt so good.

“The fans, we owe them; they’ve been very patient,” coach Phil Housley said after the Sabres extended their season-long point streak to four games (2-0-2). “We deserved the boos when we get booed.”

But the Sabres earned the wild cheering for pummeling the reeling Senators for 20 minutes. The entertaining period might’ve been their best at home this season.

“It’s just nice to give these fans something to cheer about,” Sabres winger Kyle Okposo said. “They’re awesome fans and (they’re) starving for a winner. Up to this point, it’s been a pretty unfortunate year. … We know how much they care.”

After Okposo and Benoit Pouliot put the Sabres up 2-0 by the 5:25 mark, they killed off a 59-second two-man advantage.

“That was huge,” Pouliot said of the kill. “I think that’s what gave us the big boost, too. It’s not always the power play that’s going to get you the momentum. I think when you get a good kill, a big kill like that, especially five-on-three, the boys get up, the boys rally and the boys feel good.”

“Special teams wins or loses games for you,” Sabres defenseman Rasmus Ristolainen said, “and tonight it won a game for us.”

The Sabres’ power play, which ranked first in the NHL last season, has scored in three straight games after going scoreless in 30 straight opportunities.

“You look at where we were early, a power-play goal probably gets us three or four more wins,” Housley said.

Following a stunning run of offensive futility in which the Sabres scored one goal over a four-game stretch (including three shutouts), they’ve finally started producing a bit.

They’ve scored 11 times in their four-game streak, enough offense to eke out points with goalie Robin Lehner enjoying his best stretch this season.

What else has changed in the last week?

“We’re sticking to our game plan a little bit more,” Okposo said. “We’re starting to make a few plays, starting to execute a little bit. I thought we did a really good job with our middle guy on the ice. We hit him a couple times, especially in that second period, and we were able to get some speed and … generate some chances that way.”

With two goals in the last three contests, Okposo has been generating more offense and more opportunities. Overall, he only has five goals in 29 games, however.

Pouliot, meanwhile, scored his eighth goal, a nifty one in which he narrowly avoided a big hit before backhanding a shot from the right circle. The Sabres are 6-0-1 when Pouliot scores.

“I kind of had my eyes down, too, so I could’ve got rocked pretty good there,” Pouliot said. “But I saw him at the last second. Luckily for me, the puck went through. It wasn’t the heaviest shot in the world.”

“We new where they were at coming in,” Okposo said. “Obviously, they’ve been struggling a little bit. We have to take advantage of that.”

Remember, the Senators came within a goal of reaching the Stanley Cup final last season. They fought until the end, getting late goals from Cody Ceci and Derick Brassard.

The Senators concluded a seven-game road trip that started Nov. 29 in Montreal and also hit Winnipeg and California.

One thought on “Sabres hear cheers in rare home win”