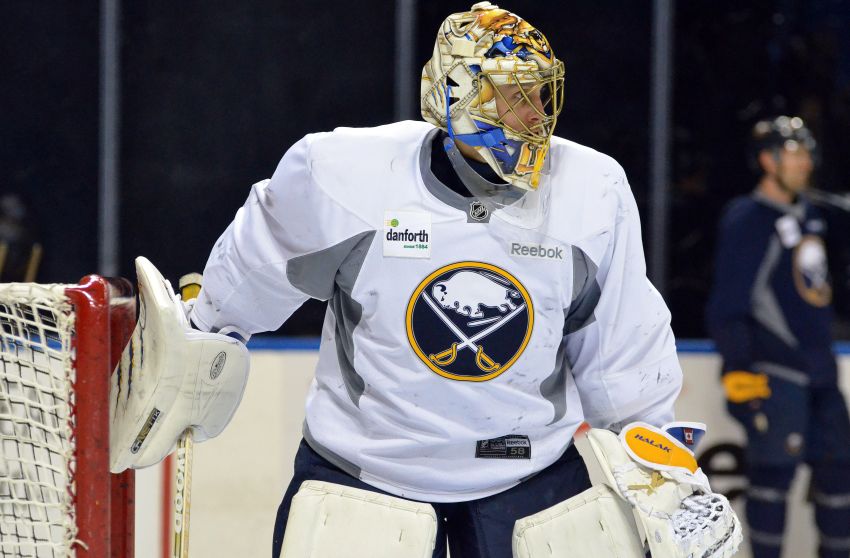 BUFFALO – Expect the rebuilding Sabres to be busy prior to today’s 3 p.m. NHL trade deadline. No one’s off limits this year. Remember, new general manager Tim Murray has no attachment to any players on the roster.

This could be the team’s busiest and biggest deadline ever. Today might help reshape the franchise for the next five or 10 years.

Here are some Sabres who could be dealt and their contract status:

Moulson, a three-time 30-goal scorer, should be in high demand as one of the best rentals available. The 30-year-old’s a legitimate first-liner and a respected veteran presence. He could fetch at least a first-round draft pick.

Moulson has played decently with the Sabres, compiling 11 goals and 29 points in 44 games. He’s acknowledged throughout his short tenure he knows his stay here could be brief.

Halak, St. Louis’ starter all season, might never play a game for the Sabres after coming over in Friday’s blockbuster Ryan Miller-Steve Ott deal. The Sabres are intent on riding goalie Jhonas Enroth, who has a year left on his deal, the rest of the season.

A contender probably wants the 28-year-old Slovak, who had strong numbers – 29-9-4, a 2.23 goals-against average and .919 save percentage – in front of the Blues’ sturdy defense. Minnesota, one team believed to be interested, acquired Edmonton’s Ilya Bryzgalov on Tuesday, however.

Halak said Sunday he understands he could be flipped immediately.

Tallinder has enjoyed a nice comeback season after a couple of down years in New Jersey. The 35-year-old has played regularly beside his old partner, Tyler Myers, and earned a spot on Sweden’s Olympic team over some younger countrymen.

Defense depth is always an issue during the playoffs. Tallinder can help someone.

Stewart, the other NHL player the Sabres received from the Blues, might last as long as Halak. At least Stewart played in a game, Monday’s 3-2 loss in Dallas.

The 26-year-old, a two-time 28-goal scorer, could bring back something nice. He has 15 goals this season and wouldn’t be a rental.

Forget about the length of Ehrhoff’s deal. The 31-year-old’s only owed another $18 million and has just a $4 million salary cap hit. The slick German submitted an eight-team no-trade list to the Sabres last week.

Ehrhoff plays 24 minutes a game and has 10 points in his last 11 contests. He’s scored more than 10 goals and 40 points in the past. His value is strong.

But the new cap recapture penalty might make the Sabres think twice about dealing Ehrhoff. If he retires before his contract expires in 2021, they would have to pay a substantial cap penalty.

Stafford has thrived under interim coach Ted Nolan, becoming arguably the Sabres’ most reliable forward. He believes he’s playing his best hockey ever. He has six goals and 12 points in his last 11 games while performing like a legitimate first-liner.

The 28-year-old has said he wants to stay in Buffalo. His eight-year run might be ending, however. As a non-rental, his value is strong. He has just a $4 million cap hit.

Some other Sabres who could get dealt:

– Center Zenon Konopka, UFA: The gritty 33-year-old’s one of the league’s best faceoff men and a popular veteran presence in the dressing room. He’s worth adding as a 13th or 14th forward.

– Forward Cody McCormick, UFA: The hard-nosed 30-year-old plays all three forward positions, is talented enough to play on a scoring line and fights regularly. He’s worth adding for depth.

Matt Moulson open to staying with Sabres, not worried about getting traded again