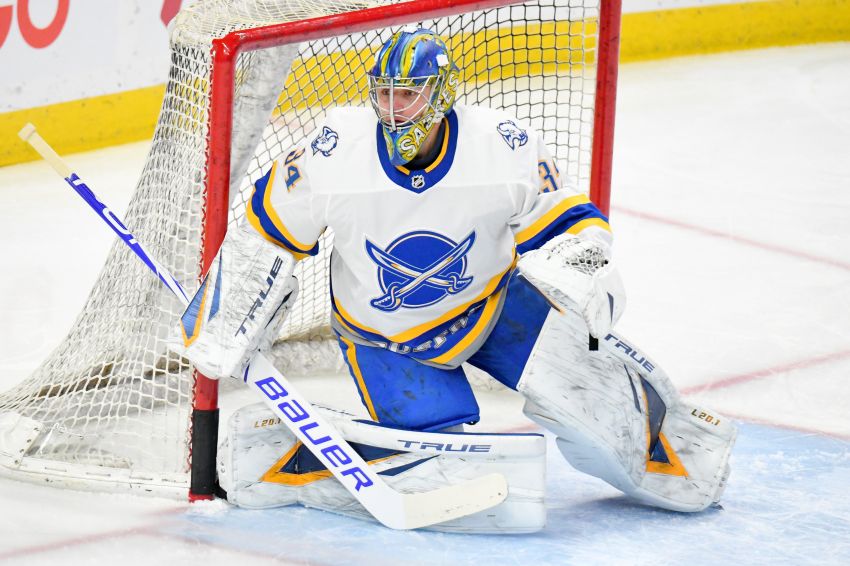 BUFFALO – If the Sabres want to add an established goalie they can utilize as Linus Ullmark recovers from his lower-body injury, Alex Stalock is available.

The Minnesota Wild waived Stalock, who has been recovering from an upper-body injury all season, on Sunday.

Stalock, 33, has played 151 NHL games, including a career-high 38 last season. The veteran could be an intriguing option for the Sabres.

Ullmark will be sidelined at least one month, coach Ralph Krueger said. The Sabres’ No. 1 goalie left Thursday’s 4-3 overtime loss to the New Jersey Devils after the first period.

So far, Jonas Johansson and Carter Hutton have subbed well for Ullmark.

Johansson, 25, made 35 saves in Sunday afternoon’s 3-0 loss to the Philadelphia Flyers inside KeyBank Center.

The Flyers scored two of their three goals on tips.

“I felt good,” Johansson said on a Zoom call. “I think the longer the game went on, the more comfortable I felt. So it’s been a long break, but they’ve done a good job with the taxi squad here.”

The 6-foot-5, 220-pound Johansson played one period in relief of Hutton on Jan. 19. He has spent most of the season on the Sabres’ taxi squad.

“There’s only so much you can do,” Johansson said of the taxi squad. “But I know what I need to feel prepared, feel comfortable, feel ready. So I’ve just been staying on top of that. It’s been hard.”

Johansson played his first six NHL games last season, compiling a 1-3-1 record with a 2.94 goals-against average and an .894 save percentage. He hadn’t started a game since March 11 with the Rochester Americans.

The Sabres infused some energy into their lineup Sunday, inserting defensemen Brandon Davidson, who was recalled from the taxi squad, and Matt Irwin.

To make room, the Sabres scratched Colin Miller for the first time this season. Rookie Jacob Bryson, meanwhile, was sent back to the taxi squad.

“It’s not for any reason other than some fresh energy into the D corps,” Krueger said of the scratches.

Notes: To make room for captain Jack Eichel, who returned from a lower-body injury, the Sabres scratched rookie winger Dylan Cozens. Krueger has said they want to monitor Cozens’ workload. … Krueger moved struggling winger Kyle Okposo up to the second line beside Eric Staal and Taylor Hall on Sunday. … The Sabres have today off.