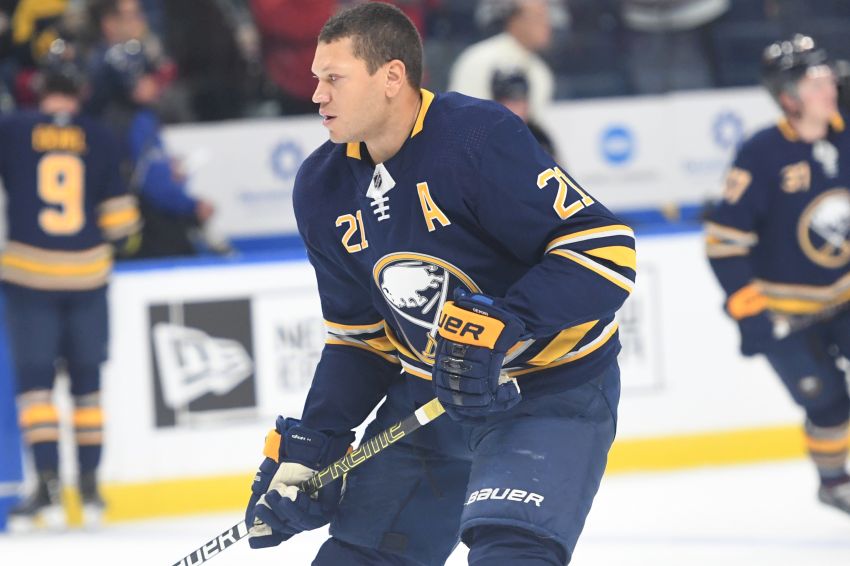 As the Penguins built a 4-1 lead, Okposo was on the ice for the second and third goals.

“I wasn’t having a very good game,” Okposo acknowledged Tuesday after the Sabres prepared for tonight’s tilt against the Philadelphia Flyers inside KeyBank Center.

A slew of factors have contributed to the Sabres’ thrilling six-game winning streak, a run that includes five victories in which they rallied from third-period deficits.

The Sabres are young, fast and look built for the modern NHL. Through the first 21 games, they’ve consistently showcased the same demeanor and become a resilient group.

One overlooked aspect of the Sabres’ torrid stretch? How the tightness they’ve developed as a group helps buoy them.

After a rough opening 25 minutes in Pittsburgh, Okposo, 30, said he “just tried to turn it up.”

“I knew it wasn’t good enough and I knew I didn’t want to let my teammates down,” Okposo said. “I didn’t let the guys down.”

Okposo created defenseman Casey Nelson’s critical goal late in the second period to narrow it to 4-3 and center Casey Mittelstadt’s tying score in the third.

“They don’t want to let their teammate down, the guy they’re playing next to, and that’s where the tightness of the group comes into play,” Sabres coach Phil Housley said.

After captain Jack Eichel’s goal 45 seconds into overtime secured Monday’s unlikely 5-4 win, he spoke about how the Sabres are “doing it for each other” and how no one wants to “let the guy next to them down.”

“Our team feels close from top to bottom, closer than it ever has,” Sabres winger Sam Reinhart said. “That’s certainly something that drives the locker room, the belief and the passion we have for one another. … That’s something that I don’t see changing anytime soon.”

Okposo said: “There’s a big trust factor in that room and we’re all trusting each other.”

Building that trust involves more than goals and assists.

“That’s what good teams do. They do the little things right.”

The Sabres, a team with about 10 new faces, worked to become a tight bunch. Of course, having a core group of players who have spent years together helps.

“We’ve had enough guys here for a certain amount of years that are close,” Sabres defenseman Zach Bogosian said. “When you have that foundation of people that were already here in the room and you add the new guys, I don’t think it’s that hard for everyone to fit in and jell and feel comfortable.”

Still, they knew they had to change following their wretched last-place finish a year ago. So they talked more during the offseason. In the summer, Housley, Eichel and the Minnesota-based players spent a day together golfing.

“It’s a combination of a lot of things,” Okposo said. “We did some things off the ice as a group that we won’t talk to you guys about, probably, but they had a really big impact on us. We knew that there needed to be a lot of changes that needed to be made and, to a man, everybody’s bought into that and everybody is on the same page.

“Now we’re starting to see some growth as a group that can have the makings of something pretty special, but we’re just kind of taking it a day at a time and really enjoying each other.”

One thought on “Sabres have grown close, don’t want to let each other down”