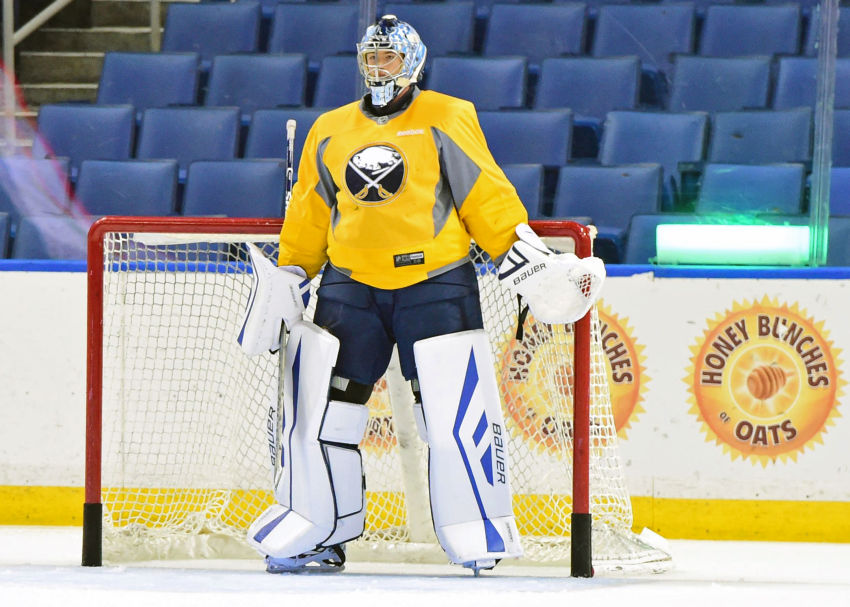 “It’s not a complete surprise to get the results and have that be the timeframe,” Bylsma said inside the First Niagara Center.

So Lehner, who has been wheeling around the rink on a cart with his No. 40 and a Sabres logo, could possibly be shelved until mid-December. The Swede has a walking boot on his right foot after leaving his Sabres debut, a 3-1 loss to Ottawa in the season opener Thursday.

Goalie Chad Johnson will likely start again for the 0-2 Sabres this afternoon against the Columbus Blue Jackets, the final contest of a season-opening three-game home stand. He looked sharp Saturday, stopping 27 shots in the Sabres’ 4-1 loss to the Tampa Bay Lightning.

“He made some huge saves to keep us in it,” Sabres defenseman Mike Weber said.

But Johnson, 29, is a career backup. While his play could force the Sabres to keep starting him, they also want to examine some of their goalie prospects as Lehner recovers.

So expect Linus Ullmark, 22, to receive some action soon. The Swede, who underwent surgery on both hips during the offseason, dazzled in his North American debut Saturday, stopping 38 shots in the Rochester Americans’ 2-1 win against the Utica Comets.

“It sounded like he was the best star on the ice,” Bylsma said.

The Sabres also have Nathan Lieuwen, one of hockey’s best comeback stories. They recalled the 2011 sixth-round pick Saturday to back up Johnson.

The likable Lieuwen, 24, experienced vision problems last season a neurologist linked to a concussion (he’s had a few) he suffered late in 2013-14. He left the Amerks in January to recover.

“He’s got a smile on his face all the time,” Bylsma said. “You can see it through his mask. He’s a guy, too, who is not unlike some of our other goalies, is dealing with injury situations and getting back to (being a) healthy guy.”

Lieuwen impressed the Sabres in his short preseason appearances before a 35-save performance Friday in Rochester.

“I don’t think there’s much more I could’ve done in my situation,” Lieuwen said about training camp. “I thought I was sharp. I think I even surprised myself with how ready I was right off the bat. I was quite happy with it.”

Lieuwen said he started facing shots again in August. He prefers, however, not to talk about his recovery.

“There was a lot of hard work that went into making sure I was ready,” he said.

“He’s still on that road,” he said. “I don’t think he’s a finished product in terms of that recovery and comeback. He did well in training camp with his opportunity, not really great.”

Sabres captain Brian Gionta could play today after a lower-body injury kept him out of the first two games. The winger practiced Sunday beside center Jack Eichel and Evander Kane.

Naturally, missing the first two games was tough. Gionta had a strong camp.

“It’s been extremely disappointing,” he said. “You want to be out there. You work all summer, all camp to get to that point of opening.”

Update: The Sabres have recalled defenseman Jake McCabe from Rochester.

In other injury news, defenseman Zach Bogosian (lower body) has been skating on his own and progressing, Bylsma said.

“A guy like Dion, he’s a pretty good player, and he has been known to rock bodies, so that was a good lesson for me,” said Guhle, 18.

Bylsma said he has no immediate plans to play him in a game.

Zemgus Girgensons, who switched back to the wing this season, skated at center Sunday between Tyler Ennis and Ryan O’Reilly, a move Bylsma said O’Reilly is fine with. Girgensons could pivot that trio today.