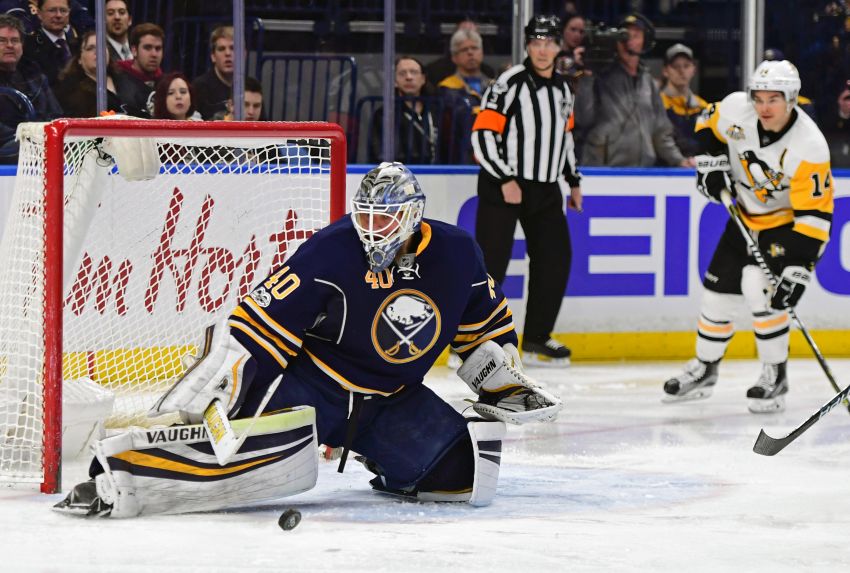 BUFFALO – Instead of securing that long-awaited playoff spot, the Sabres have stumbled, even regressed this season, again cementing their status as one of the NHL’s bottom-feeders.

This was, of course, supposed to be the year the drought ended. The Sabres would earn their first postseason berth since 2011. The tank, the years of suffering would finally pay dividends, right?

Well, it hasn’t worked out for the Sabres, who have three games left this season, starting with tonight’s home finale against the Montreal Canadiens, “Fan Appreciation Night.”

The Sabres can be maddening to watch. They often beat some of the NHL’s best teams. They also regularly fall to lightweights. They showcase little consistency and have a disturbing penchant for blowing leads.

Many fan bases would’ve abandoned a perennial loser years ago. But in Buffalo, KeyBank Center is still packed most nights, as it has been for years.

The Sabres have played to 95 percent capacity at home this season, averaging 18,125 fans a game. They have 10 sellouts.

“It’s a pretty full building every time we’re here,” Sabres goalie Robin Lehner said Tuesday following practice. “They’re very supportive fans. They deserve better than what they’ve got. You can’t give up, you can’t lay down and give up. … It’s what this … city deserves.”

The Sabres, who say they understand their fans’ frustrations, believe they enjoy special support.

“They’re some of the most loyal bunch I’ve been associated with,” Sabres coach Dan Bylsma said. “They’ve been with us through thick and thin and with us the whole way.”

“You want to please the fans because of all they’ve been through and all they continue to put up with,” he said. “You still want to be better. It’s disappointing our season’s ending like this.”

They might’ve hit rock bottom in Monday’s 4-2 loss to Toronto, their fiercest rival, falling behind 3-0 to the Maple Leafs just 5:09 into the game.

In other cities, the Sabres would be playing inside a half-empty rink.

But the mediocrity started long before Eichel arrived. The Sabres haven’t played a home playoff game since April 24, 2011, a stretch of 2,173 days.

“If I’m the fan base, I’m frustrated as well,” Sabres defenseman Jake McCabe said. “We’re all frustrated in here. It’s no fun being out of a playoff spot. I understand frustration.”

Eichel noted Sunday afternoon’s 4-2 loss to the New York Islanders, a meaningless game, was sold out.

The building should be full tonight, although many (or even most) fans will be cheering for the Canadiens, who have clinched the Atlantic Division title.

Eichel wants one more opportunity to put on a show for Sabres fans.

“Thanks to all of them to supporting us throughout the year,” he said. “We’ve got one game left, and just put it all out there for them and try to win a hockey game and bring some excitement in the building.”

Still, the Sabres have played some exciting games this season, including a slew in Buffalo. Their 5-2 win over the Leafs before a raucous bipartisan crowd March 25 might’ve been the most thrilling.