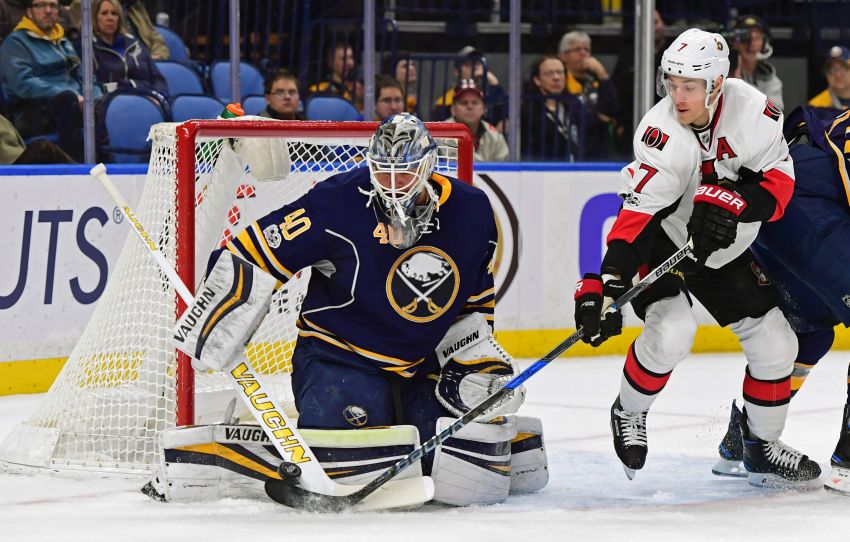 Sabres coach Dan Bylsma has mentioned the twinkle Lehner gets in his eye. And the Swede’s statistics against the Senators illustrate the tilts mean a little more.

Clearly, Lehner, who was traded to the Sabres for a first-round pick in 2015, wants to prove the Senators made a huge mistake by dishing him to an Atlantic Division rival.

Lehner dazzled again Saturday in the Sabres’ 4-0 win against the Senators, making 37 saves for his first shutout this season and the fourth of his career.

Lehner possesses some scintillating numbers – 3-0-2 with a 1.18 goals-against average and a .961 save percentage – in seven games against the Senators.

Lehner made his slickest stop with 17.5 seconds left in the second period, snaring Mike Hoffman’s shot from the left circle with a quick glove.

“There’s a lot of focus in Robin when he knows he’s facing not only the Senators, but a lot of guys he considers friends on the other side of the ice,” Sabres coach Dan Bylsma said.

“He’s been one of the most consistent players,” O’Reilly said. “He’s given us a chance so many times. It’s nice to see him beat his old team like that in a shutout. He played phenomenal tonight.”

In ending their three-game losing streak, the Sabres won their fifth home game in six tries and extended their point streak at KeyBank Center to six games.

Start to finish, Saturday’s win, the Sabres’ 21st this season, was one of their most balanced efforts of 2016-17.

Kyle Okposo opened the scoring 10:11 into the contest, skating through the slot before backhanding a shot high over Ottawa goalie Mike Condon.

O’Reilly followed 16:51 into the second period, tipping Rasmus Ristolainen’s point shot in from beside the net.

Before that goal, the Sabres had played a poor second period before the capacity crowd of 19,070 fans.

“We believe in each other. But we also recognize our flaws right now. One two big games and then go and two losses is not going to cut it.”

O’Reilly said: “We got to keep that beginner’s mindset every time we come to the rink we’re (ticked) off and we want to be better, we’re not satisfied.”

A second period in which the Sabres got outshot 13-7 didn’t satisfy them.

“Guys were a little upset with each other,” O’Reilly said. “We regrouped. We said we got to come out, we got to work, we got to get back to winning battles. It’s amazing when we do that and we play simple, we seem to find a way to win games.”

Sam Reinhart scored 5:53 into the third period, connecting on Jack Eichel’s slick backhander from behind the net.

Marcus Foligno, who fought Mark Borowiecki in the second period sticking up for Eichel, finished the scoring at 7:51 off an Eichel pass, his first goal in 11 games. With nine goals this season, Foligno’s just one short of his career high he set in 2015-16.

“(Foligno) gets a big fight, we’re able to score a couple goals in the third, our goalie stepped up for us and we win a game against a divisional opponent,” Eichel said.

Lehner flashes the leather outside the crease. pic.twitter.com/dQQkHCVk26