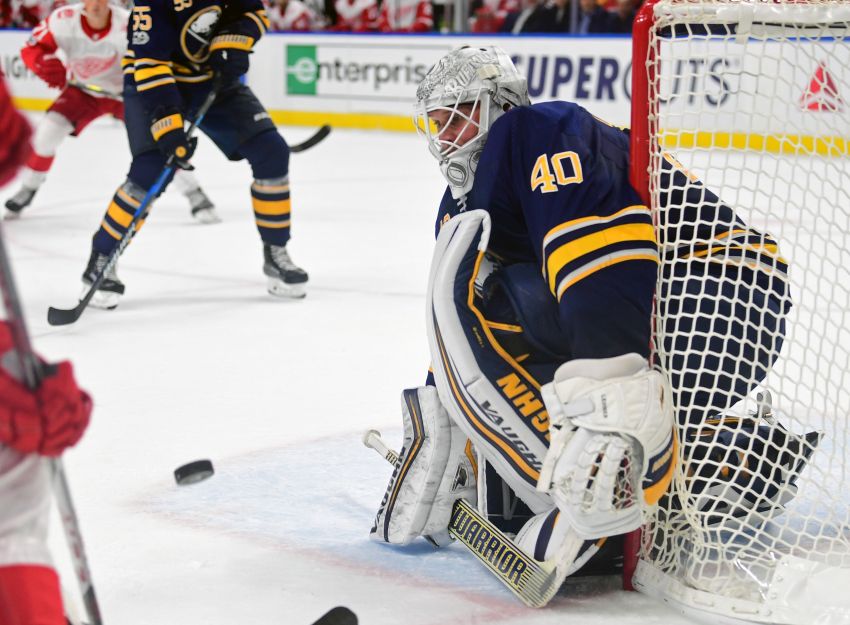 BUFFALO – For once, Robin Lehner enjoyed a pretty quiet night. In fact, of the 32 saves the Sabres goalie made in Tuesday’s 1-0 win against the Detroit Red Wings, only a few would be considered difficult.

“When we needed a save, Robin delivered it for us,” coach Phil Housley said following the Sabres’ second straight win and first victory at home this season.

For almost three weeks, as the Sabres stumbled out of the gate, they consistently hung their goalies out to dry, allowing odd-man rushes and other high-end scoring chances.

But fresh off Saturday’s 5-4 overtime win in Boston, a game in which they roared back from a 4-1 deficit for their second win, the Sabres looked poised, clamping down on the Red Wings and limiting their quality chances after some shaky moments early on.

“We played the right way,” Lehner said following the sixth shutout of his 174-game career. “We’ve got to keep learning what makes us successful. I think the first 10 minutes of the game we went back and played like we did before. …

Housley said of the strong defensive effort: “It was a commitment to playing without the puck.”

Four days ago, the Sabres couldn’t stop reeling. A night after a weak home loss to Vancouver, they imploded early before stunning the Bruins.

Now, tonight in Columbus against the Blue Jackets, the Sabres have an opportunity to compile their first three-game winning streak since Feb. 14 to 18.

“It’s great,” Housley said. “This team’s been through a lot. They’ve had some tough starts they’ve had to battle through, but they’ve now found a way to win a tight game, which is really important.”

Sabres newcomer Benoit Pouliot scored the game’s only goal, a wraparound 9:45 into the second period, his second score in as many outings after zero in the first eight contests.

“I didn’t really know where the goalie was,” said Pouliot, whose goal was created by rookie defenseman Victor Antipin’s first NHL assist. “I was trying to do it as quick as possible.”

Lehner, meanwhile, was steady throughout, making 10 saves in the first period, another 10 in second and 12 in the third before the 16,882 fans inside KeyBank Center.

The Swede made his best save about 17:30 into the second period, making a point-blank stop on Martin Frk with his left pad. He stoned Frk again in close in the third period.

“It felt good,” Lehner said. “(I) felt good and relaxed in there, felt like I saw the puck well.”

Was it significant for Lehner to earn a shutout right now, just 10 games into the season? He hadn’t posted one since Feb. 16.

“It doesn’t really matter because when I get good numbers it doesn’t matter anyway,” said Lehner, whose team finished last in the Atlantic Division as season ago despite his sparkling .920 save percentage.

“It’s a compliment to him that he comes back and plays a really strong game at home,” Housley said. “He made some really big saves at the right time for us. … It’s really strong, it’s going to boost his confidence.

Holding a lead for more than 30 minutes should also boost the Sabres’ confidence.

“It means that we followed the game plan,” Lehner said of grinding out a tight win. “I said from Day One we have a good game plan, we’ve just got to do it. …

“Look at that third period. We were just flipping (the puck) out, putting it in, kept them going 200 feet back getting it and we had numbers back home. It’s hard for teams to do that.”