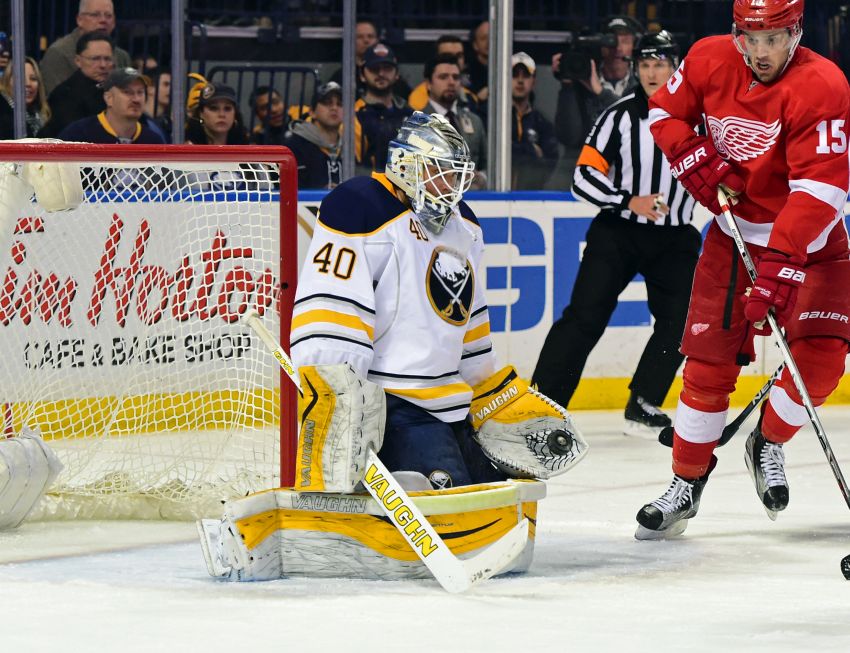 BUFFALO – So far, three games into Robin Lehner’s return, the Swede has looked every bit like the No. 1 the Sabres envisioned when they dished a first-round pick for the unproven goalie.

After missing more than three months, Lehner has performed splendidly, stopping 85 of the 92 shots he has faced, including 42 on Friday in the Sabres’ ugly 3-0 loss to the Detroit Red Wings.

At this point, 48 games and 29 defeats into another lost season, the 29th-ranked Sabres need to search for silver linings. Lehner’s performance in an otherwise wretched effort provided one.

Still, the notoriously intense Lehner, isn’t happy. He hasn’t won a game for his new team. Of course, the Sabres have scored two goals for Lehner in three games.

“The 0-3 in the win column bothers me,” said Lehner, who had a high right ankle sprain. “I want to win. Obviously, it’s nice to feel good out there. But at the end of the day, it’s about wins and we’ve got to work harder.”

In another season filled with boring, ugly losses, Friday’s game might rank among the worst.

No wonder the Sabres got blanked for the fourth time.

Thanks to Lehner and more terrific penalty killing – the Sabres have stopped 19 straight – the contest remained scoreless into the third period. The Sabres appeared to seize the momentum after killing Marcus Foligno’s four-minute high-sticking penalty early on, but Dylan Larkin scored 42 seconds later.

“I thought we did a great job with that kill,” Bylsma said. “I thought we were going to kill that off, ride that momentum and come back and score one the other way.”

Instead, the Red Wings scored two more goals, including an empty-netter, to secure another victory against the Sabres, a team they’re 14-1-1 against since March 13, 2010.

Why did the Sabres, who had won two straight games before Wednesday’s 2-1 loss in Colorado, look so out of sync before the 18,601 fans inside the First Niagara Center? Were they tired?

“I don’t attribute any of this game to that at all,” Bylsma said. “We pretty much handed them the puck tonight with our execution and gave them opportunities to play in the offensive zone with how we executed. That is all on us.

“It’s not anything due to travel or anyone who may be in our out of the lineup. That was almost throughout the game, especially the second period.”

Sabres defenseman Mike Weber added: “I don’t know what it was. It didn’t look like we had legs out there. So we didn’t play the smart game that we had been playing.”

Given the Sabres’ sorry state and their investment in Lehner, he might start playing more regularly.

Bylsma said Friday’s performance was “a big step” for Lehner.

“I think the frustrating part is he’s played well and doesn’t have a win for us yet,” he said. “I know the process for him maybe isn’t about the wins and losses, but it is, I know, something he wanted to get in the net and come up with a win for us.”