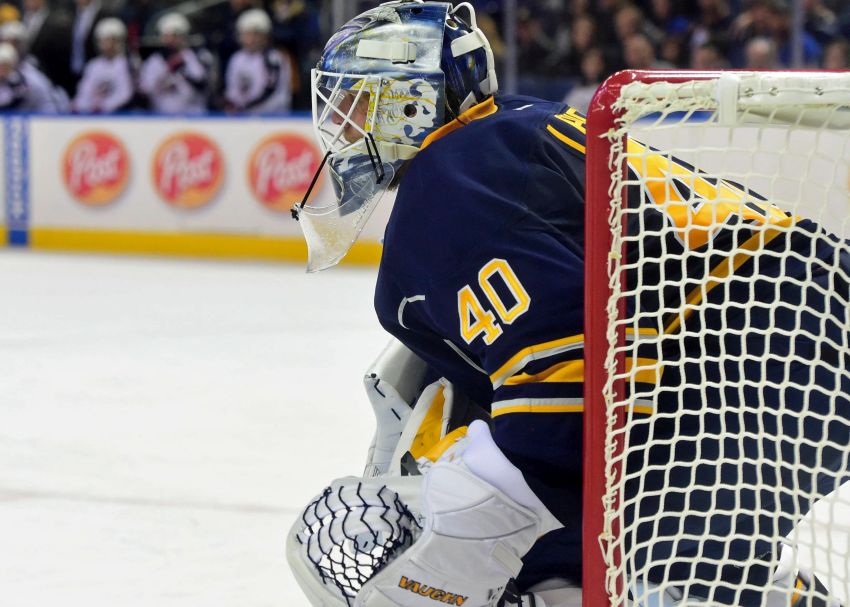 BUFFALO – During some tough days over the last three months, as Robin Lehner recovered and rehabbed from the injury he suffered opening night, the goalie leaned on his family and friends for support.

Lehner just endured an arduous 11 months, suffering a season-ending concussion last year with Ottawa and a high right ankle sprain Oct. 8, only 28 minutes into his debut as the Sabres’ new starter.

The Swede had never experienced a major injury before.

“It’s been hard, you know?” Lehner said Thursday after the Sabres recalled him from his three-game AHL conditioning assignment with the Rochester Americans. “It’s hard mentally. This is your job. This is what you do. (It’s important to have) the support around you and people being positive and (helping) you through this.

“It’s pretty depressing just sitting out watching, coming in with pretty much no purpose every day. It’s been good to have friends and family around.”

Lehner’s grateful to finally have a purpose again. He will likely play his second game for the Sabres this weekend at home, either tonight against the Boston Bruins at the First Niagara Center or Saturday versus the Washington Capitals.

To make room for Lehner, the Sabres sent rookie goalie Linus Ullmark, who won the last two games, back to the Amerks. More on Ullmark later.

So how much will Lehner play? Sabres coach Dan Bylsma has a plan he wouldn’t share. For now, he simply wants to see how Lehner, who was acquired from the Senators for a first-round pick June 26, responds to some NHL action.

The Sabres still have backup Chad Johnson, who subbed admirably for Lehner. In 16 games since the beginning of November, Johnson is 7-6-2 with a 2.10 goals-against average and a .932 save percentage.

Lehner, of course, will likely need some time to acclimate. He looked shaky early in the preseason before some superb work.

Lehner went 1-2 with a 3.36 goals-against average and a .888 save percentage with the Amerks. He made 35 saves Wednesday in Rochester’s 4-0 loss in Albany.

“It’s been a little up and down with the foot,” Lehner said. “It’s still sore. It’s probably going to be sore for a little bit. I felt as the games went on it affected my games less and less.”

Lehner said he wanted to “make some mistakes” so he “can correct those mistakes.”

These early days could be like another camp for Lehner.

“In a lot of ways it still is,” Bylsma said. “He spent a lot of time off his feet for the past 10 weeks. Yes, he’s had practice time. Yes, he’s had seven good practices with the team and in Rochester … but he essentially hasn’t played a game in a year’s time. … It’s been an awful long time.”

“Andrew Hammond came in and played out of this world,” Lehner said. “You lost your job, that’s how it works. Got a new chance here and get injured again.

Meanwhile, sending Ullmark, 22, to Rochester was the easiest choice given he didn’t need to clear waivers. Still, the decision was difficult, Bylsma said.

“It’s the right thing to do this time,” he said.

Ullmark told reporters in Rochester he knew he would likely get sent down.

“It feels better to get sent down with two wins than getting sent down losing eight straight games,” he said. “I’m coming down with good confidence in my game.”