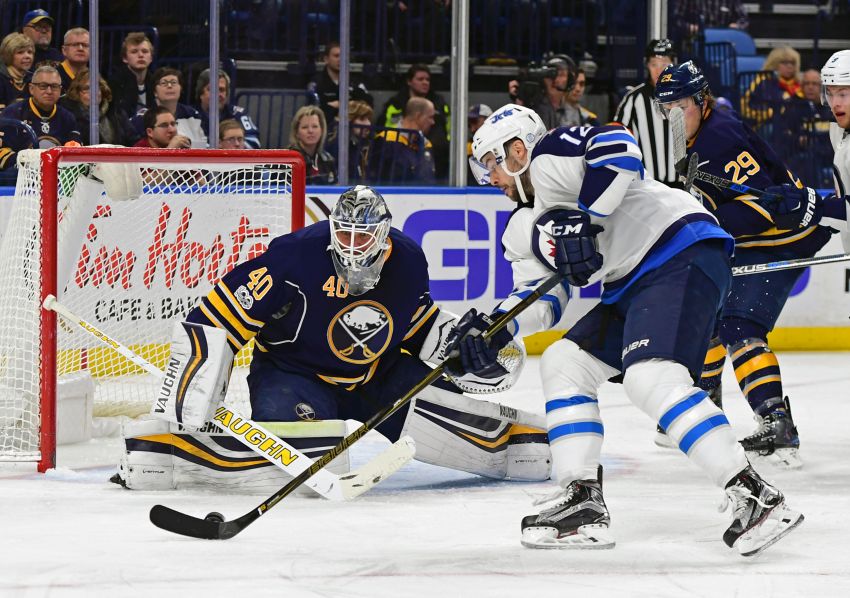 BUFFALO – Before Robin Lehner threw a fit after getting yanked from Tuesday’s 4-3 loss in Toronto, the fiery Sabres goalie skated to bench during a break and waved to a child whose mother was sitting in the first row and face-timing with her son at home.

Not long after that, Lehner was back at the bench erupting after allowing three goals in less than 10 minutes.

Some, of course, will say Lehner’s wave as he took a swig of water illustrates a lack of focus and trace it to the Maple Leafs’ goal bonanza, which included a weak score that went in under his right arm.

“I understand how it looks,” Lehner said inside KeyBank Center. “People that know me, I go up, I’m going to have a drink. It’s a mom with a 5-year-old kid waving in his pajamas. You know what? I’m going to wave back. I don’t care what anyone thinks. …

Naturally, Lehner’s antics spread on social media and television. The setting, Toronto, certainly played a role in that. The Swede also yelled at his bench as he skated off the ice and threw off his mask and glove.

“I understand what it’s coming from, it’s all entertainment to them, but it’s a real-life reaction from me, and I accept the responsibility of it,” he said. “I got mad. I let in three goals in 10 minutes.”

Lehner understands he has “a history of maybe being short-fused.”

“You know what? I can’t change it,” he said. “I will do things differently. I didn’t have a hallway to go down. I had a bench to go and sit on. I asked my coach why and he responded we needed a change.”

Lehner took exception to some television analysts saying he posed for a selfie.

“Commentators don’t know that they’re talking about,” he said. “They’re saying I’m taking selfies. That’s not a selfie. I guess as you get older you don’t really keep up with the social media thing. That’s all good. I’ll take the responsibility. They can think what they want. You know what? I am who I am.”

Lehner said he has spoken to Sabres coach Dan Bylsma.

“He said what he thinks and I respect everything he thinks,” he said. “I don’t want to portray this organization like that. But again, social media. The team needs something else. I’m not helping the team by showing my emotions. I got to learn from it.”

Bylsma said he and Lehner “talked about it.”

In other news, the Sabres recalled goalie Linus Ullmark this morning because backup Anders Nilsson is sick, Bylsma said.

Winger Tyler Ennis also practiced today after resting his groin injury Tuesday. Bylsma said Ennis, who returned from a 30-game absence Monday, will play Friday against Detroit and could play Saturday in Montreal.

Meanwhile, defenseman Josh Gorges (hip) is seeing a doctor today and defenseman Dmitry Kulikov (back) is skating on his own, Bylsma said.