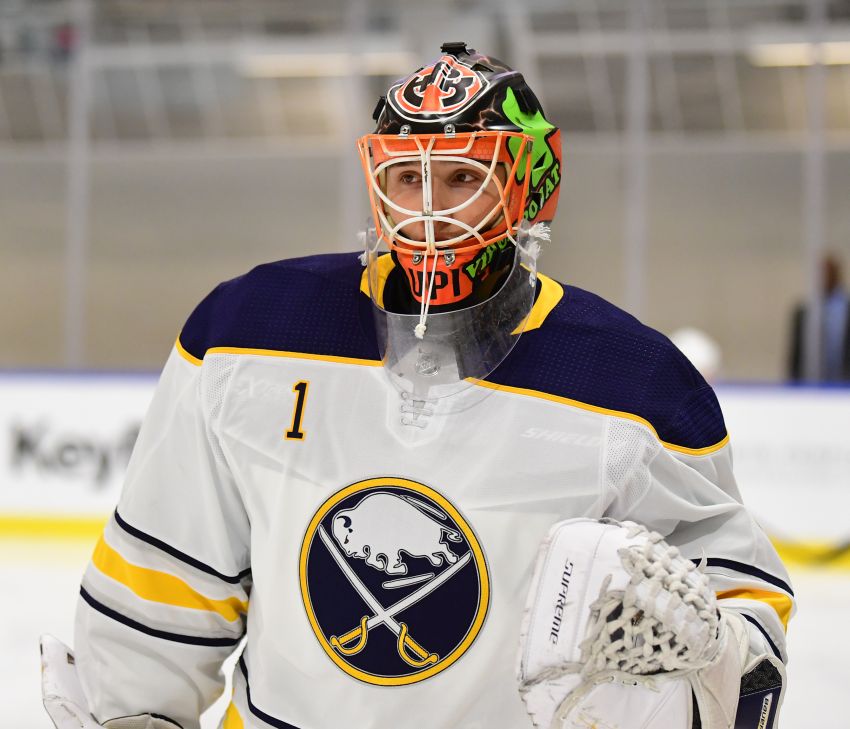 TORONTO – On April 14 in Belleville, goalie Ukko-Pekka Luukkonen played his 68th and likely final game this season, stopping 32 shots in the Rochester Americans’ 4-2 win over the Senators.

“It was a big thing for me, builds your confidence up a lot, especially looking to next season when you want to play in the pros,” the Buffalo Sabres’ top goalie prospect said of his pro debut.

Luukkonen, 20, has taken a backseat to Scott Wedgewood and Adam Wilcox, the Amerks’ regular goalies, for the playoffs.

Next season, Luukkonen will likely be Rochester’s starting netminder. But right now, the Finn is just getting a taste of pro hockey and the AHL.

“(I’ve learned) how everything is that much better and how everything is just more professional,” Luukkonen said Saturday inside Bill Gray’s Regional Iceplex in Brighton. “I need to come here and watch how the older guys are doing their practices and how they prepare for the games.”

Tonight’s playoff game against the Toronto Marlies at Coca-Cola Coliseum is do-or-die for the Amerks, who lost the first two contests of the best-of-five North Division semifinal series at home.

Luukkonen, whose first North American campaign has been an eight-month whirlwind, won’t even dress for the game.

After attending training camp with the Sabres, the 6-foot-5, 219-pound Luukkonen started what quickly became a dynamic junior season with the Ontario Hockey League’s Sudbury Wolves.

Luukkonen, a second-round pick in 2017, 54th overall, could’ve stayed at home in Finland. But joining the Wolves offered him an opportunity to acclimate to the smaller North American ice and a faster style of play while playing more games.

“It was a big decision to make to be away from Finland,” Luukkonen said. “Hockey-wise, it was really good and real easy for me to adjust to the game. … It was a really good decision for me.”

Luukkonen played 53 regular-season games, compiling a sparkling 38-11-2 record with a 2.50 goals-against average and a league-best .920 save percentage.

“There was a lot of shots every game, a lot of high-skilled forwards and a lot of good teams,” Luukkonen said of the OHL.

During the season, Seamus Kotyk, the Sabres’ goaltending development coach, kept in contact with Luukkonen and visited him about once a month. Kotyk would also fly to Finland last year to see Luukkonen.

In December, Luukkonen backstopped Team Finland to a gold medal at the World Junior Championship in Vancouver.

After starting 2-2, Finland roared back to upset Team Canada in overtime, clobber Team Switzerland and beat Team USA to capture the gold.

Luukkonen performed splendidly during the tournament, posting a 1.80 goals-against average and a .932 save percentage.

“It was an awesome tournament, a lot of the guys that have played the last four or five years on the junior national team,” Luukkonen said. “So I ended my junior (career with Finland) like that. It was just awesome.”

Luukkonen’s junior career with the Wolves ended April 11, when the Ottawa 67’s swept them in the second round of the playoffs.

After enjoying a day with his Sudbury teammates, Luukkonen met the Amerks in Belleville. He played the regular-season finale without the benefit of one practice with his new team.

“There’s a lot going on,” Luukkonen said. “Somehow, it might’ve been a good thing for me, too, I didn’t have too much time to think about (it).”

He added: “(The) last week or so has been quite busy for me. There have been different places and different teams, but it’s been a really exciting time.”