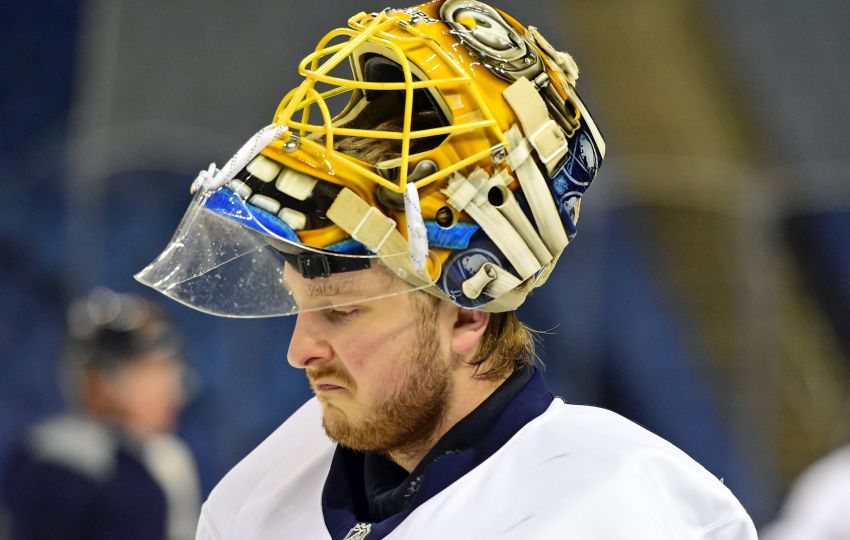 Linus Ullmark knows he must improve to be a No. 1 NHL goalie. ©2016, Dan Hickling, Olean Times Herald

ROCHESTER – Ten minutes after his occasionally suspect 20-save outing ended Wednesday, goalie Linus Ullmark was his normal loquacious self, joking and laughing with a familiar face following the Americans’ entertaining 6-5 overtime win.

Ullmark’s third appearance since the Buffalo Sabres sent him to their AHL affiliate earlier this month was perhaps his toughest game in what has mostly been an impressive rookie season. His teammates frequently abandoned him, leaving Syracuse Crunch players open for third and fourth opportunities.

Still, the 6-foot-4, 212-pound Ullmark wasn’t exactly spectacular. In the second period, he allowed a ghastly 80-footer from the far blue line, a goal he said was tipped and bounced in front of him.

“The ice just rips it top shelf on me,” Ullmark joked inside the Blue Cross War Memorial. “The ice did it.”

Ullmark’s demotion to the Amerks, a move that created room for No. 1 goalie Robin Lehner, hardly bothered him. Even though Ullmark had just won consecutive starts for the first time in two months, he knew he would be sent down whenever Lehner returned from a high ankle sprain.

“I thought I was going to be sent down after like a month or something,” Ullmark said. “So for me to be up there for so long and play so many games is something I could never dream about. I had my expectations of playing here (in Rochester) the whole season. …

“(It was) a wonderful time to be up there and get a taste of it, you know? It makes me motivated to get up there again.”

Ullmark, 22, has embraced his second stint with the Amerks. After splitting time with Chad Johnson in Buffalo, he should play the bulk of the games down the stretch. His two recent NHL wins – he stopped 70 of 74 shots on the road – helped him arrive with confidence.

He believes he has a “more stable life” now than in Buffalo, where he stayed in a hotel. He’s living in a house in Rochester with his girlfriend. Simple things like being able to cook a meal instead of eating out make a difference.

“I feel calm inside,” he said.

Some of the calmness he enjoyed with the Sabres on the ice has disappeared in the AHL, a league in which he only played three games in before he was summoned in October.

“It’s a tough league,” said Ullmark, who could be recalled if the Sabres trade Johnson, an upcoming free agent. “There’s a lot of chaos going on going back and forth. … I don’t think I’m playing at my top level, of course. I want to say maybe 85, 90 (percent) at least. So there’s a lot of improvement left.”

While Ullmark often looked like a No. 1 goalie with the Sabres, he struggled at times. The 2012 sixth-round pick won four of his first six starts before dropping 10 out of 11.

He was, however, often the hard-luck loser. The Sabres scored just a single goal last month during a three-start stretch in which Ullmark allowed two goals each game. Overall, Buffalo’s top goalie prospect went 7-10-2 with a 2.58 goals-against average and a .915 save percentage.

“I feel like I can play there,” Ullmark said. “There’s still things I need to work on to be able to compete like a starting goalie, though. But right now, I don’t think I’m a starting goalie. That’s the thing, I’m 22 years old and I have all the time in the world. When you’re good enough for the job, you get it. That’s how it is. You got to just go to work every day with a smile.”