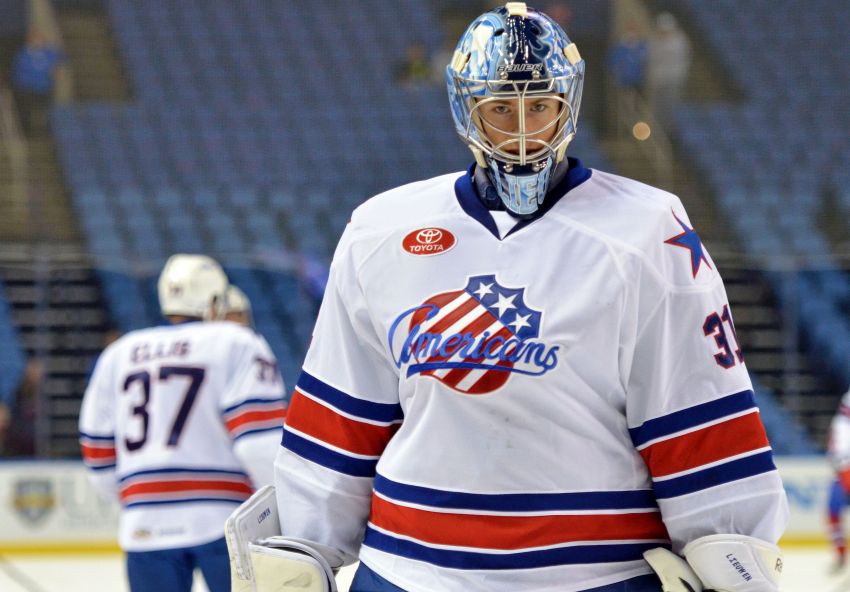 BUFFALO – Closures from Winter Storm Knife have been blocking the quickest route from Rochester to Buffalo, the New York State Thruway.

So upon getting summoned to the NHL on Wednesday, Sabres goalie Nathan Lieuwen had to find a different path here.

“I kind of got some advice,” Lieuwen said Thursday inside the First Niagara Center.

Armed with a map, the 23-year-old took Route 104, a roadway close to Lake Ontario.

Lieuwen said his trip took about two hours and 45 minutes.

“Tried to get here safely,” he said.

Lieuwen’s in Buffalo for the time being. His recall could be short.

Goalie Michal Neuvirth, who suffered a lower-body injury early Tuesday’s 4-1 win against San Jose, might be back sooner than expected.

Goalie Jhonas Enroth will start Saturday’s game in Washington. Enroth was also scheduled to start tonight’s game against the New York Rangers before the NHL postponed it.

Lieuwen, meanwhile, has struggled badly this season, going 3-4 with a 3.53 goals against average and .876 save percentage.

The likable youngster has said in the past he tries to concentrate on one puck at a time.

“I guess sometimes it can feel like they’re coming at me two at a time,” Lieuwen said. “They’ve scored a couple back-to-backs at me pretty quick.”

Lieuwen developed into a strong NHL prospect last season – 17-11-2, 2.34 and .922 – with the AHL Americans. He earned a seven-game recall to the Sabres before a concussion ended his year.

This trip to the NHL has meaning.

“To see the faith in me … is huge for me,” Lieuwen said. “I’ll take that as a boost of confidence.”