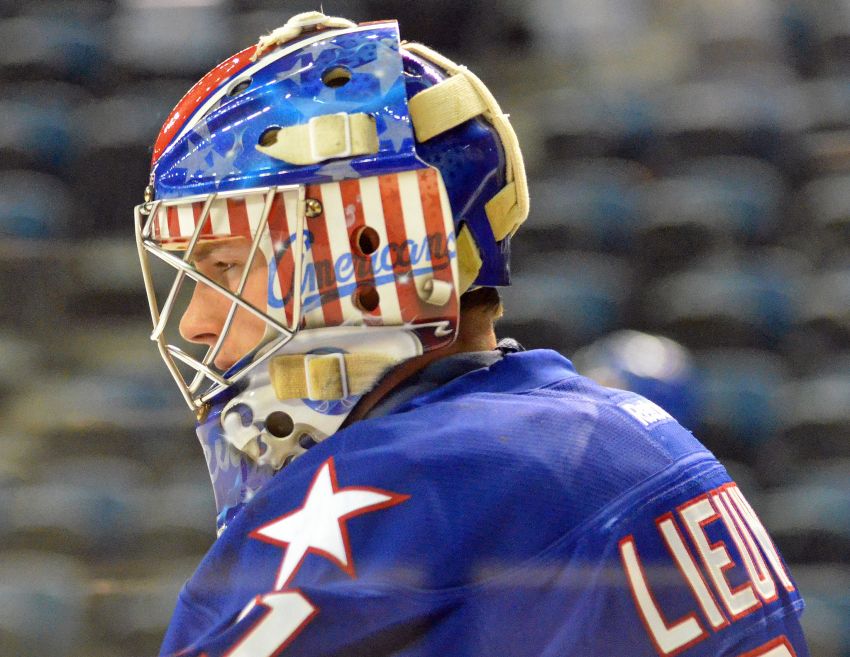 I wrote this in July 2011 just a couple of weeks after the Sabres drafted him.

LEWISTON – Yeah, Nathan Lieuwen thought the worst. The Buffalo Sabres goalie prospect is only human, you know. He knew the two scary concussions that had derailed his promising junior hockey career could potentially force him to retire as teenager.

“It crossed my mind,” Lieuwen, the 167th pick by the Sabres last month, acknowledged after a recent session of the team’s development camp at Dwyer Arena. “When you’re injured that much and that stuff is going on, you think, ‘Well?’”

In becoming arguably the league’s best goalie and a legitimate prospect again, Lieuwen, who had been bypassed in the last two drafts, started getting noticed by NHL scouts.

When the Sabres called to inform him they had selected him in the sixth round, it was an emotional moment the 19-year-old once believed he might never experience.

“Getting that phone call was special for me,” Lieuwen said. “To go through all that I’ve been through and make it through, this is what I always wanted, right? To finally be here is exciting.”

An undisclosed injury has kept Lieuwen from participating in drills this week. That hasn’t spoiled his first small taste of NHL life, however.

“Everything that’s gone on, I’ve definitely wanted and worked hard to get here,” Lieuwen said. “I learned a lot along the way, and I think that only made me better.”

Lieuwen’s troubles began as a rookie 2007-08, when he was concussed in a one-car accident. Once he recovered, he lost his backup job and was demoted. He played only three WHL games.

A year later, after starting the first half of the season, Lieuwen sustained a concussion in January and missed the rest of the year.

“I couldn’t really be frustrated at anything except for the fact I was hurt or whatever,” Lieuwen said. “In my mind, there are no excuses. That’s just the way it went.”

Still, Lieuwen suffered. In addition to headaches, the constant uncertainty dogged him.

“I wanted to break out of it more than anything,” Lieuwen said. “You just wonder what life has in store for you.”

It turned out life had another scare for him.

Lieuwen, 6-foot-5 and 185 pounds, was hit again when returned in 2009-10, suffered a neck sprain and sat a month. His doctor told him that if it had been a concussion, he should’ve considered retirement.

“The doctors were worried that it was another concussion, and in that case, if it was, there would be more cause for concern,” Lieuwen said. “It turned out it wasn’t so I came back. But I had already lost my job.”

“I feel back to normal,” Lieuwen said. “I honestly feel like I’ve healed up pretty good. I’ve been knocked around pretty good a few times. I got knocked out this year and feel fine.”

“If he wasn’t there, we wouldn’t have won,” McNabb said. “He was phenomenal. He bailed us out numerous times. You can’t say enough about his play.”

Was Lieuwen in the zone during the playoffs?

“That’s exactly the way I would put it,” he said.

Rob Niedermayer, a Sabre forward last season, is a co-owner of the Ice, and he also recommended Lieuwen to general manager Darcy Regier.

“We thought we’d take a chance on him in the sixth round,” Devine said.

“With a player playing the goalie position, it’s really a fluke,” Devine said. “You don’t see too many happen with goaltenders. That wasn’t really a consideration there. We just thought that he’s probably a little bit undervalued in the sixth round.”

Lieuwen, who turns 20 years old next month, can play in the AHL in 2011-12, although he’ll likely return to junior for his overage season. Despite being in the WHL parts of five years, he’s only played 122 regular-season games.