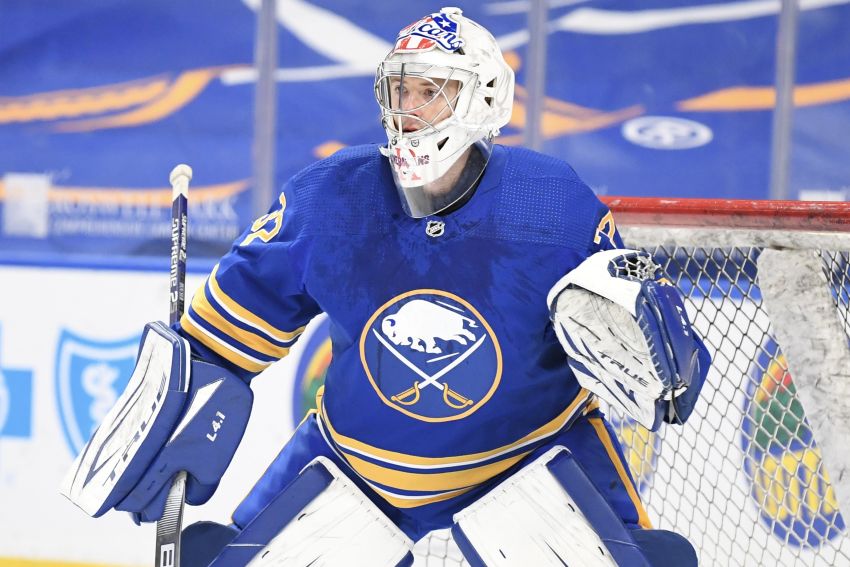 Forget that Michael Houser began this season in the ECHL, two levels below the NHL. Forget that eight days ago, the Buffalo Sabres goalie did not have a big league contract.

As Sabres coach Don Granato watched Houser, 29, up close for six weeks last year, he developed an appreciation for how well the veteran minor leaguer prepared himself, even as the team’s taxi squad goalie. When an opportunity to play his first four NHL games materialized late last season, Houser seized it, winning twice.

So Granato possessed confidence Houser would be ready when the Sabres needed him again.

“He’s prepared for opportunities and he was ready,” Granato said on a Zoom call Tuesday following Houser’s splendid 43-save performance in a 3-1 road win over the Ottawa Senators at Canadian Tire Centre.

“That was spectacular, and it did carry through the night,” Granato said of the breakaway save.

Houser made 15 saves in the first period, 18 in the second and 10 in the third. When the final horn sounded and Houser earned his third NHL win, he said he felt “pumped.” His teammates then enthusiastically embraced him.

“It’s fun to see the boys so happy for not only for me but just to win,” Houser said.

Moments later in the dressing room, Houser’s teammates asked him to say a few words.

“He’s one one of those guys that inspires others,” Granato said. “That performance tonight was inspiring and the guys felt that and it carried on to the locker room for quite a while afterwards.”

Houser, who has backed up goalie Aaron Dell three times, said he learned Sunday he could be starting Tuesday.

“I prepared like it was going to be my game,” he said.

While Houser acknowledged he felt some nerves before the game, he looked calm and composed all night.

“He was unbelievable for us back there,” said Sabres center Mark Jankowski, who scored the winning goal 10:03 into the third period. “We have the most confidence in him, and he’s just a great guy, someone that everyone in that locker room loves to battle for and loves to play in front of. He gives us that confidence back there. Obviously, he was amazing tonight.”

Jankowski’s bizarre goal was one of the most amazing Granato has ever seen. After Erik Brannstrom hit Sabres winger Kyle Okposo into the boards between the benches, a scrum with about eight players ensued. As it kept going, the whistle never blew, so Ottawa’s Josh Brown grabbed the puck and skated toward the Buffalo zone.

But Jankowski stripped Brown and went in on a breakaway and beat goalie Anton Forsberg.

“I didn’t really see what was going on until turned up and saw the whole thing at the bench there,” Jankowski said. “Me and their D-man were just kind of gliding up for a bit. I didn’t hear them blow a whistle, so I was like, ‘I’m going to see if I can get this.’ So I just lifted his stick.”

Granato said the bench was yelling, “Too many men on the ice!” because the Senators had six skaters.

“Then all of sudden, this surreal happening,” Granato said. “You look a little further and Jankowski’s going in on a breakaway. So great job by him still paying attention.”

He added: “In 30 years of watching hockey and being around hockey, that was the first time happening. It was a surreal occurrence.”

Okposo, who has scary history of concussions, left the game and did not return. Granato did not have an update and said Okposo was being examined.

“We had to get a puck deep there and he left himself exposed and vulnerable through that,” Granato said of the play Okposo made before being hit. “When you do that, obviously, you’re doing that for the team. On the coaching side and the other players on the team, you feel that … you feel pain in that as well.”