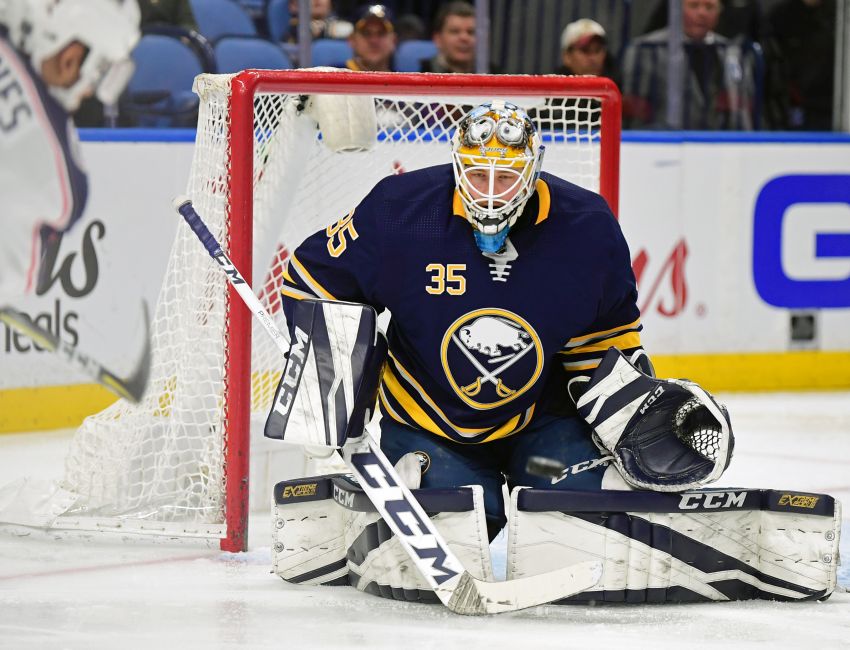 Ullmark won eight of his 20 appearances as a rookie two season ago, often showcasing the talents of a future No. 1 netminder.

But with Robin Lehner entrenched as the Sabres’ starter, Ullmark, 24, has spent two seasons developing in the AHL, where he has quietly morphed into one of hockey’s top goaltending prospects.

NHL starts have been scant. The Swede’s last game before Thursday came April 9, his only appearance last season. He hadn’t won a game since April 9, 2016.

That’s why backstopping the Sabres to only their 11th win this season was so special.

“Very emotional, I try to keep it inside, naturally,” Ullmark said after the Sabres’ ended their five-game losing streak. “It’s been my dream ever since last summer to get it all together and come up and play. … I’m very humble and happy about the win tonight.”

Update: Both have been sent back.

The Sabres begin a five-day bye week today. Still, given the team’s sorry state, it’s possible the two youngsters have played their last NHL games for a bit.

The Amerks look poised for a long playoff run. That would benefit them much more than sticking around the last-place Sabres.

The Sabres had nothing to lose by starting Ullmark, who practiced three days this week as insurance after a puck hit Lehner’s neck Sunday.

Lehner played Tuesday but got yanked from a 7-4 loss to Winnipeg, a game after which Housley criticized his goaltending.

The Sabres need a spark, so they turned to Ullmark, whose confidence impressed Housley.

“He’s carried that forward from Rochester,” he said. “He’s very calm, he doesn’t overplay things, he’s pretty tight and he’s pretty square to the puck and he makes that first save. He fought through some traffic to make the second save.

“He stepped up, he was on his angle and he was challenging and you could see the confidence in his game.”

Ullmark made 11 saves in the first period, 15 in the second and 18 in the third. Only Artemi Panarin’s wicked power-play backhander beat him high 13:45 into the third period.

The 6-foot-4 Ullmark often flopped around during his first NHL stint. On Thursday, however, he showcased a calm, compact style.

“He made a lot of saves look easy and a lot of pucks were hitting him in the chest,” Okposo said.

While the Sabres gave up a lot of shots, they played much tighter defensively than Tuesday, an outing so bad Housley ripped his team’s feeble efforts to defend.

“We just really had a focus on getting back and limiting their odd-man rushes,” Okposo said. “I don’t think they had too many tonight.”

Ullmark said: “We did a tremendous job of boxing out, also blocking shots that might’ve been a goal. If you keep all the shots from the outside, it makes it a lot easier.”

The slick Guhle, who recorded his first NHL point in his fifth game, can make joining the rush look easy. He pinched twice in the first 10 minutes, almost creating an early goal.

“He wants to attack the game in a good way and he wants to get involved in the rush,” Housley said. “I think sometimes he got a little too anxious, like got too far ahead of it and he had to put on the brakes.

Guhle said: “I felt good out there. It’s good to start out the game with some energy. We created some chances right off the first few shifts. I think that put the other teams on their heels a little bit and gives us some momentum.”