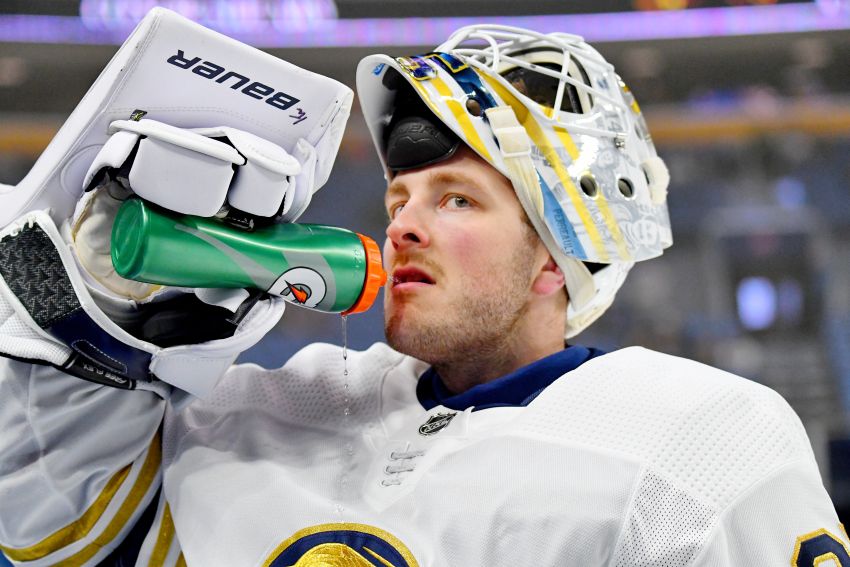 Linus Ullmark started small by tackling some easy home projects. Then the Buffalo Sabres goalie ramped up his renovations. For example, he designed a couch that created more storage in his family’s apartment in Sweden.

“Now we’re in full throttle of remodeling our kitchen back home,” Ullmark said on a Zoom call Thursday.

While Ullmark, 27, might not be the next Bob Vila, he enjoys working with his hands. The projects give his mind an opportunity to focus on new things.

“I think about stuff that (does) not involve hockey at all times,” said Ullmark, who signed one-year, $2.6 million contract Sunday.

Ullmark, of course, still has hockey on his mind sometimes. Unless the Sabres acquire a goalie through a trade – at this point, that seems unlikely – he will almost certainly be their starter whenever the 2020-21 season begins.

The Swede has performed like a No. 1 goalie for stretches of his 97-game NHL career. Still, he has mostly served as a backup, never playing more than 37 times in a season.

“It’s always a time to prove myself,” Ullmark said. “It doesn’t matter if I’m on a one-, two-, three-, or a long-time deal. It doesn’t take away the things that I need to do every day to better prove myself as being a starting goaltender in this league.”

Ullmark understands there are doubts he can be a starting NHL goalie.

“To prove every doubter wrong is probably the most satisfying thing as a goaltender except for saving all the shots in a single game,” he said. “It’s going to be my goal to take my game to the next level and prove myself.”

Earlier this month, Adams spoke glowingly of Ullmark’s progression. After free agency opened, Krueger said he “would feel extremely comfortable” with Ullmark and Carter Hutton, who endured a rough 2019-20 season, as his goalies.

“It’s pretty obvious that you as a goalie need the support from everyone, and if the coach and the GM doesn’t like you, you’re not going to stay on the team,” Ullmark said. “I’m very fortunate, I’m very happy to continue on my journey here with the Sabres.”

Ullmark just enjoyed his best NHL season, recording a 17-14-3 record with a 2.69 goals-against average and a .915 save percentage in 34 outings.

A slew of factors contributed to Ullmark’s solid season. The Sabres showcased a tighter defense under Krueger. He enjoyed a strong relationship with assistant coach Mike Bales, who is in charge of the goalies. The consistent action he earned also helped him develop a rhythm.

“I can really trust his voice and his way of seeing things,” Ullmark said of Bales. “When you put together a lot of games in a row and just play a lot of games, everything just kind of happens naturally just because you’re in the flow of it all and there’s no thought process behind every save or so, which could be one of the reasons why it’s so hard being a backup or being a guy that kind of gets one every fifth game or so.”

Ullmark believes simply receiving more game action will help him morph into a No. 1 netminder.

“The more experience you get, the easier everything else gets,” he said. “I only played my second season now with the Sabres, fairly new to this NHL hockey. So for every game that goes by, it’s going to be not, per se, easier, but it’s at least going to be some things are going to fall into place, both mentally and physically and how to win a game and how to act on the game.”

Cozens, 19, is expected to compete for a spot with the Sabres when NHL camps begin. The Sabres drafted Quinn, 18, eighth overall Oct. 6.

The tournament starts Christmas day in Edmonton. The COVID-19 pandemic will prevent fans from attending this year.