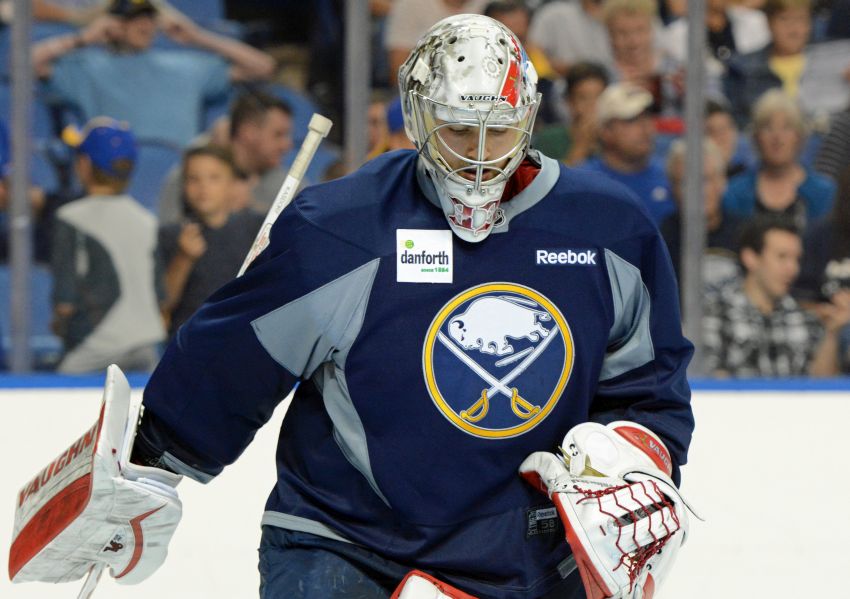 BUFFALO – To Sabres goalie Jason Kasdorf, who will make his NHL debut in tonight’s home finale against the Columbus Blue Jackets, experiencing some nerves before games feels good.

“I’m just kind of naturally that way,” an excited Kasdorf said this morning. “Even for college games, I’d get nervous for them. It’s just who I am.”

Kasdorf, who said he slept well last night, will likely feel some extra nerves tonight, when he becomes the fourth goalie to start for the Sabres this season. The Winnipeg native will have some company in wingers Cole Schneider, a Williamsville native, and Evan Rodrigues, who will also make their first NHL appearance.

By tonight, nine Sabres will have played their first NHL game this season.

While some debuts have been much more anticipated, Kasdorf, an afterthought in the blockbuster trade that brought Zach Bogosian and Evander Kane here last season, is a notable prospect.

Sabres coach Dan Bylsma has said recently he wanted to get the former sixth-round pick a game, and tonight seemed like a good fit. The Sabres close the season Saturday on the road against the New York Islanders.

Kasdorf found out Thursday he would play. He expects about 17 family members at the First Niagara Center tonight.

“It’s been pretty crazy just trying to get my schoolwork done, being around the rink working out, practicing, trying to get healthy, meeting my new teammates for the rest of the season,” Kasdorf said. “So it’s been busy, that’s for sure.”

“I think I’m pretty calm,” he said. “I try to bring a calming presence to my team. I try to have good rebounds and keep the game simple.”

Kasdorf said he looked up to Montreal goalie Carey Price growing up.

“But I just kind of do what works for me,” he said.

In other news, rookie Hudson Fasching and Cal O’Reilly will sit tonight to make room for the newcomers. Fasching will probably return Saturday, Bylsma said.

Meanwhile, goalie Nathan Lieuwen, who has backed up Chad Johnson recently, wasn’t on the ice this morning.