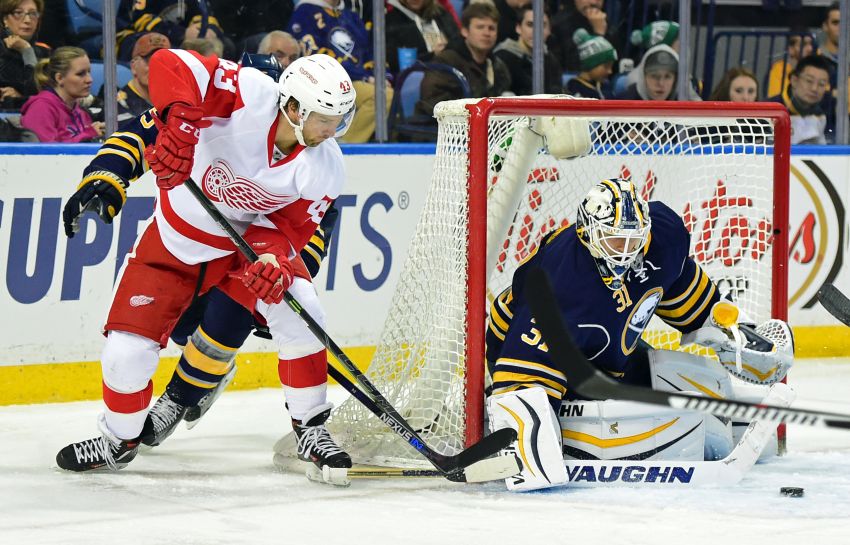 BUFFALO – Sabres goalie Chad Johnson learned years ago he needed to embrace the nomadic lifestyle that often accompanies a career as a backup.

So at each of his five NHL stops, Johnson, 29, has tried to make the best of what can be a difficult situation by exploring his new city, meeting its people and finding the best local eateries.

“That’s the only way you can really deal with getting traded all the time, moving around,” Johnson said Thursday inside the First Niagara Center. “I’ll look back and I’ll be able to go to these different cities and know all the best restaurants, know all these people and have connections everywhere.”

Johnson, a Calgary native the Sabres acquired almost a year ago, has grown to love what Buffalo offers.

“It’s an American city, but it has that real diehard Canadian feeling to me,” he said. “They love the Bills, they love the Sabres. I love being in cities like that where they embrace sports and food. I love that aspect of it. You can’t go wrong.”

The comfort Johnson feels from the city and his team has helped bolster his game. In his sixth season, he has quietly been the Sabres’ backbone at times, earning 13 of their 23 wins entering tonight’s road contest against the Columbus Blue Jackets.

The trust Johnson has built with his teammates is special.

“You build it through performance on the ice and things you do away from the rink and how you are as a person,” he said. “I’ve tried to be a good teammate.”

But the likable Johnson’s stay here, like his other stops, might be a short one. As an unrestricted free agent following the season, he’s a prime candidate to be dealt before the Feb. 29 trade deadline.

“I want to be here and be here long term, be a part of this,” he said. “But I understand it’s a business and it has to work for both sides. It’s been good. I’ve enjoyed it here.”

He said his uncertain future is both “exciting” and “nerve-racking.”

Still, the Sabres have options younger than Johnson, who coach Dan Bylsma called a “stalwart.”

Robin Lehner, who was injured more than three months, appears to be entrenched as the starting goalie. Then there’s Linus Ullmark, a rookie Bylsma often called on as Lehner, 24, recovered from a high ankle sprain.

Ullmark, who’s back in the AHL, often showcased the talents of a No. 1 NHL goalie during his 19-game run. But Ullmark, 22, has only played 30 games in North America. It’s possible the Sabres will want the Swede to play a full season with the Rochester Americans next year.

If that happens, the Sabres will likely need a veteran backup like Johnson for a year.

“You try not to focus on different scenarios, but you have to prepare yourself for those situations,” Johnson said.

Johnson has played well enough a team could offer him a two-year contract, something he earned from the New York Islanders in 2014 following a superb campaign in which he was perhaps the league’s best backup with the Boston Bruins.

“I was proving that I could be a guy that plays his backup role and could be one of the best, if not the best, backup,” Johnson said.

“It’s been great for me to … kind of prove why I had success in Boston and what I did there wasn’t a fluke and years past as well,” Johnson said. “So (this season) was definitely … another statement season.”

Perhaps it will help Johnson find a new place where he has an opportunity to be a No. 1 goalie.