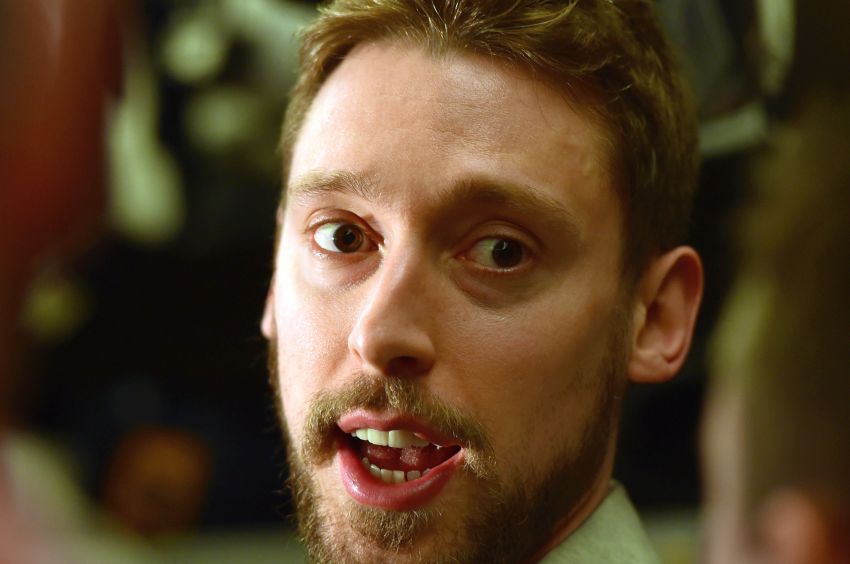 BUFFALO – Chad Johnson often talks about his desire to be a starting goalie, so not surprisingly, the Sabres veteran has already examined the jobs that could be open when he hits unrestricted free agency July 1.

“It’s hard not to,” Johnson said Sunday as the Sabres held their end-of-season meetings. “I try to stay as in the moment (as possible). I’m not going say which teams, but there’s four teams that need goaltenders or starting goaltenders or don’t have guys that have done well.”

Johnson, 29, enjoyed a breakout season in 2015-16, showcasing a calm style while playing a career-high 45 games subbing for injured No. 1 goalie Robin Lehner.

From Nov. 1, his statistics ranked among the league’s elite. In 36 games, the Calgary native’s .928 save percentage ranked third among regular goalies and his 2.16 goals-against average ranked fifth. Johnson’s numbers after Lehner’s high ankle sprain ended his season – 6-2-1, 2.21, .925 – are terrific.

“I always believed I could be relied upon to be a starting goaltender,” Johnson said inside the First Niagara Center. “It was just … proving that sort of to myself and to the media and to everybody … that I can be that.”

Johnson thrived as a backup in Boston in 2013-14 before the New York Islanders dished him to the Sabres last season following five months in which he was one of the league’s worst No. 2 goalies.

So what changed this season?

“I think it’s just really the opportunity,” Johnson said. “I watch a lot of hockey on TV and watch a lot of the starters. I knew I could be a starting goalie in this league. It just came down to opportunity, the right situation.”

The exploits of forwards Jack Eichel, Ryan O’Reilly and Sam Reinhart garnered most the attention this season, but Johnson was arguably the team’s most consistent presence.

Johnson’s teammates voted him the Sabres’ unsung hero, a recognition he said means “everything to me.”

“It’s just a really, really big honor,” he said. “It’s tough not being able to know if I’m going to be back here just because I feel great about the group of guys.”

Despite becoming the team’s backbone, general manager Tim Murray wants Lehner, 24, to be his starting goalie. Murray traded a first-round pick to Ottawa for Lehner on June 26, so he has a large investment in the Swede.

To reach the playoffs, Murray said Monday, the Sabres must “have an established starting goaltender who may not be your best player, but your hardest-working player.”

Murray has pegged Lehner as that netminder, although he mentioned Johnson “competing for the job in net” next season.

Of course, for the right price, Murray’s interested in re-signing Johnson. Murray also knows a team desperate for a starter could break the bank for Johnson, who just finished a two-year, $2.6 million contract.

Johnson might command a two- or three-year deal worth $2 million or more a season on the open market. Would the Sabres, who also have rookie goalie Linus Ullmark in the AHL, want to make that kind of commitment?

Johnson said he’s looking “to be relied upon.”

Johnson doesn’t know how the Sabres’ decision-makers feel about him.

“Obviously, there’s a lot invested in (Lehner) and he’s a younger guy,” he said. “But I’ve played well this season and done well with the group.”

Johnson will likely have some suitors in free agency. While most teams already have a starter, a few, most notably Johnson’s hometown Flames, need one. Calgary has zero goalies with NHL experience under contract for 2016-17.

Murray said the Sabres are among the teams in the hunt for high-scoring North Dakota star Drake Caggiula, who just won a national championship and earned NCAA Tournament MVP honors.

The undrafted forward recently whittled his list of clubs down, Murray said.

Caggiula, 21, scored 25 goals and 51 points in 39 games in his senior season. He attended the Sabres’ summer development camp in 2014.

Murray said Monday he planned to talk to Caggiula and his agent “in the next couple days.”

The Sabres have a terrific recruiter for college free agents in Eichel.

“He’s a dynamic young center who could possibly be the best player or in the conversation for the best player in the league in the next couple of years,” Murray said. “So if I’m a winger, if I’m looking around the league, that’s one guy I definitely want to play with. If I’m a goal scorer, I would love for Buffalo to give me a chance.”