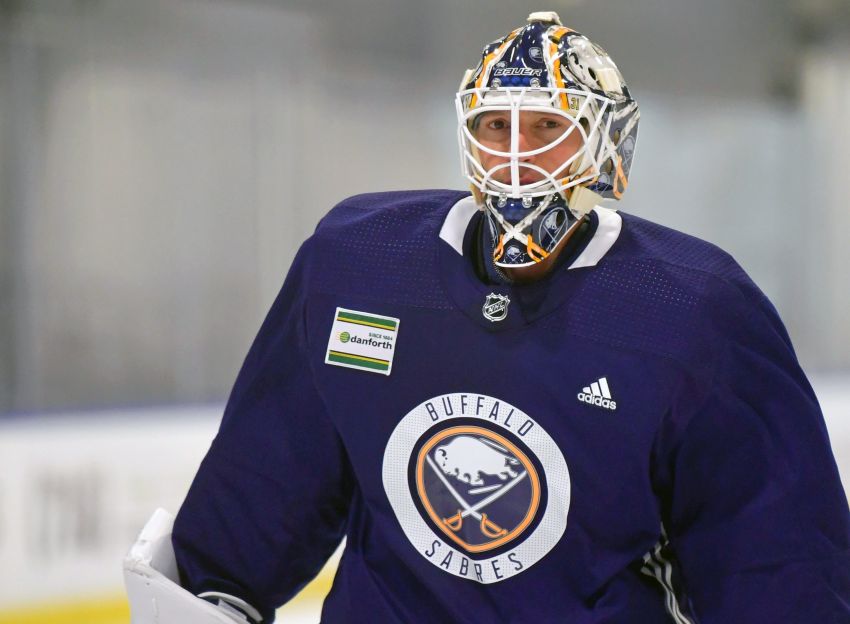 “Don’t change anything,” Johnson said the goalie coach told him. “It’s just you’ve been getting some bad bounces, been a part of some tough games.”

Johnson, who will start tonight’s home tilt against the Florida Panthers, played well enough to win some games during his skid. Still, he hardly dazzled.

After Phil Housley yanked him from a 5-4 home loss to Minnesota on Nov. 22, the coach seemed to lose confidence in his backup.

“It just seemed like he was backpedaling to that point,” Housley said this morning inside KeyBank Center. “I thought he had some really good efforts, didn’t get any results.”

Johnson finally won again Jan. 22 in Calgary, his hometown, making 32 saves in a 2-1 overtime triumph against the Flames.

Of course, his first victory since Oct. 15 and just his second this season generated some much-needed confidence.

“Regardless of the results I’ve had in the past, what I’m doing can have success,” Johnson said. “It’s a team sport. The goalie position, no matter who you are, you rely on your team, your team relies on you. So I think just knowing confidence-wise, continue to do what I’ve been doing and then overall it comes together.”

In other news, the Sabres, who held an optional skate this morning, will make some lineup changes after Tuesday’s 3-1 loss to New Jersey.

Housley said center Jacob Josefson, out the last 10 games, will play his first game since Jan. 9. The Swede recently recovered from a lower-body injury. Winger Jordan Nolan should also return after two scratches. Benoit Pouliot and Evan Rodrigues will likely be out up front.