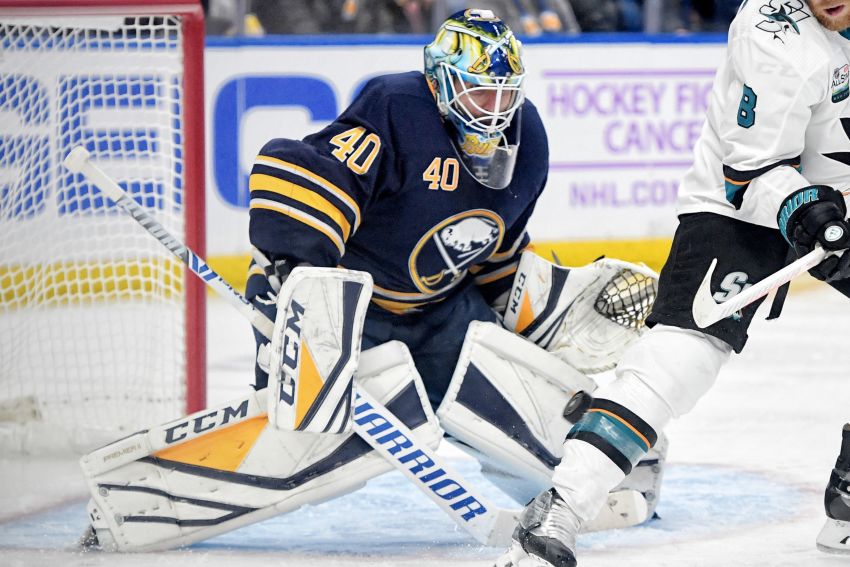 Carter Hutton has quickly become one of the Sabres’ leaders. ©2018, Micheline Veluvolu

BUFFALO – Five years into his NHL career and 21 games into his new gig as the Sabres’ starter, goalie Carter Hutton’s mentality hasn’t changed.

Hutton will start again tonight against the Arizona Coyotes. An upper-body injury sidelined him one game before he backed up Linus Ullmark for Tuesday’s 4-3 overtime win against the Los Angeles Kings.

“Carter brings a lot of energy to the game every day and passion to the game and his work habits and his work ethic speak a lot about who he is,” Housley said this morning inside KeyBank Center. “There’s a lot of other intangibles that come into play. Being in the room and the veteran experience and the way he communicates within our group, it’s been invaluable.

Hutton, who hasn’t played in 10 days, isn’t worried about the layoff.

In others news, the Sabres will use the same 18 skaters as Tuesday, meaning an upper-body injury will sideline defenseman Marco Scandella for the eighth straight game.

Housley said he wants Scandella to have one more practice.

– How’s this for an incredible stat? The Coyotes have scored 11 short-handed goals this season and only allowed eight power-play scores in 85 attempts.