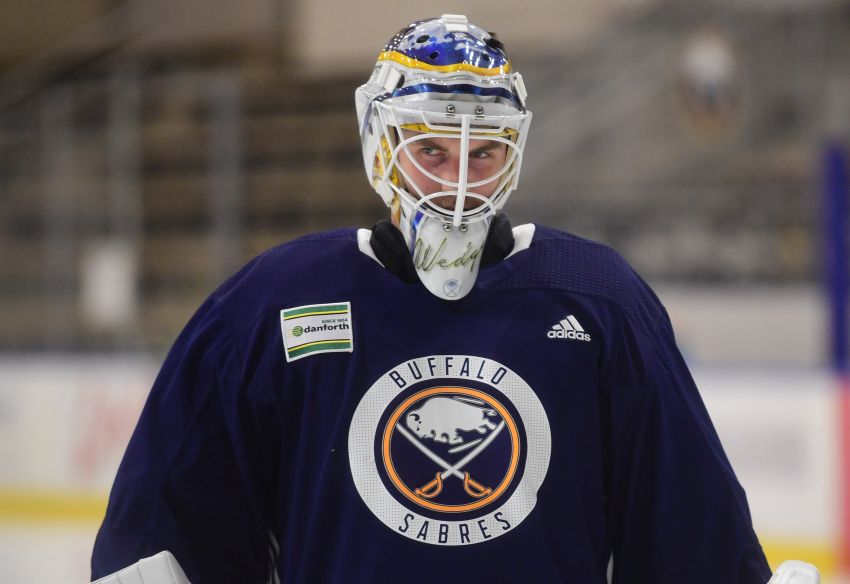 BUFFALO – With Sabres goalie Carter Hutton day-to-day with an upper-body injury and out for Saturday afternoon’s tilt, according to coach Phil Housley, they recalled Scott Wedgewood this morning.

What happened to Hutton? The starter finished Monday’s 2-1 loss in Nashville and backed up Linus Ullmark for Tuesday’s 4-3 overtime loss here to Toronto.

“It was sort of formed the last three or four days,” Housley said this afternoon inside KeyBank Center. “During the game, it just stiffened up, his upper body. So we’re just being precautious with it.”

Hutton has performed splendidly in his first season with the Sabres, going 12-8-1 with a 2.60 goals-against average and a .917 save percentage in 21 games.

Wedgewood, 26, has been the Rochester Americans’ starter this season, going 8-4-2 with a 2.91 goals-against average, a .907 save percentage and two shutouts in 14 games.

Wedgewood has 24 games of NHL experience with New Jersey and Arizona. He spent most of last season with the Coyotes, playing 20 times.

“It’s always exciting,” Wedgewood said of returning to the NHL. “This is the best hockey league in the world and you want to be here all the time. I got a good chunk of it last year, started off well in Roch.

In addition to goalie Adam Wilcox, the Amerks have prospect Jonas Johansson, who was recalled from the ECHL on Monday. Johansson played in Wednesday’s 5-2 win over the Utica Comets.

The Sabres also summoned defenseman Matt Tennyson, who was sent to the AHL on Wednesday, from the Amerks today.

In other news, the Flyers have recalled former Sabres forward Phil Varone from the AHL Lehigh Valley Phantoms, where he has scored 11 goals and 28 points in 22 games.