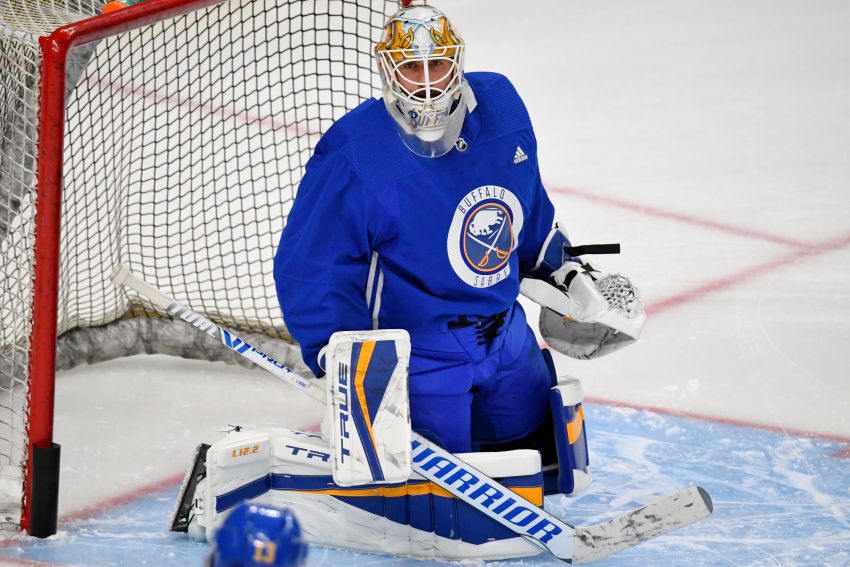 Carter Hutton is one of the NHL’s best puck-handling goalies. ©2021, Micheline Veluvolu

In the waning seconds of Monday’s scrimmage, Buffalo Sabres goalie Carter Hutton said a “perfect situation” materialized for him.

Over the years, Hutton, one of the NHL’s best puck-handling netminders, said he had tried to score an empty-net goal a few times.

“I’ve never been successful other than just shooting a few pucks at the end of practice,” Hutton said on a Zoom call.

But on Monday, as Hutton’s Team Blue enjoyed a 4-1 lead over Team Gold, the puck slid right back to Hutton following a faceoff.

“It’s kind of cool to score a goal,” he said. “It’s just a scrimmage, but it’s a real game for us. You’re trying to be game-like. … I was just trying to make sure I got it high and it worked out. I’m sure I’ll be hearing a little bit about it here.”

The goal overshadowed a strong performance in the 5-1 win by Hutton, who struggled last season.

“We’d have to call him the star of the game,” Sabres coach Ralph Krueger said. “He really held his team in the game, especially through the midsection of the game. There were quite a few scoring chances by the gold team where he neutralized. I was very, very pleased with the confidence and the overall aura he showed.

“To score a goal at the end, I’ve never seen one live, so that was a nice finishing touch for Carter after such a long break.”

Didn’t get a chance to watch today’s scrimmage? Catch up with the highlights! #LetsGoBuffalo | @BCBSWNY pic.twitter.com/XKmzYE1GbR