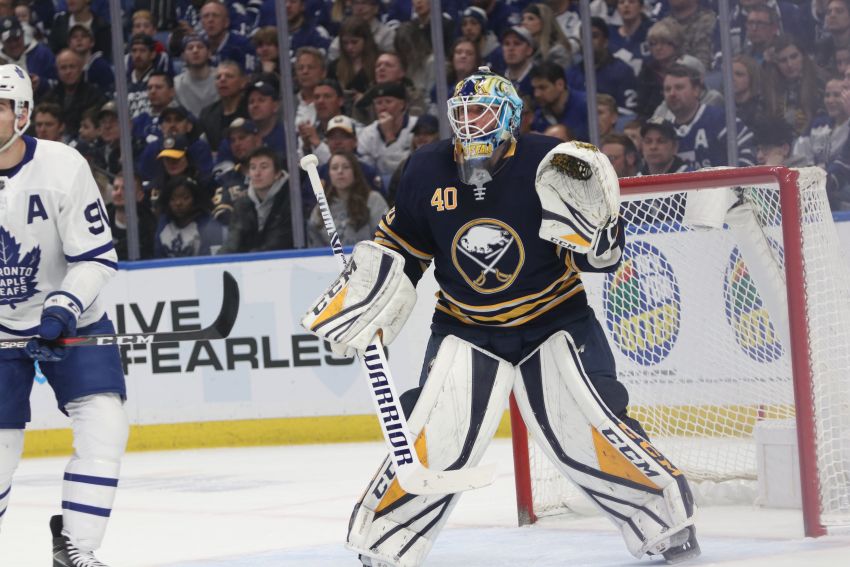 BUFFALO – For two periods, as the Toronto Maple Leafs kept pummeling the Sabres, it was reminiscent of tank-era games from several years back.

The Leafs pumped 11 shots on goal before the 10-minute mark Wednesday. At one point in the opening period, they held a 17-2 shot advantage.

Goalie Carter Hutton, meanwhile, turned away shot after shot, keeping the Sabres in a game they had no business being in.

Heck, thanks to center Casey Mittelstadt’s power-play goal late in the first period, the Sabres even held the lead for a bit.

“Carter Hutton bailed us out (in the) first and second period,” coach Phil Housley said following the Sabres’ 4-2 loss inside KeyBank Center.

Of course, Hutton, who made 42 saves, could only do so much. The Leafs also got lucky.

Tavares’ goal bounced in off Sabres captain Jack Eichel beside the net. Auston Matthews’ tying score earlier in the period deflected in off his skate.

The Leafs, fresh off Tuesday’s 3-0 loss road loss to the Nashville Predators, sealed the game when Mitch Marner scored 22 seconds into the third period.

“There were plays there and plays we had to make,” Mittelstadt said. “I think we were just too slow and didn’t execute quick enough.”

Who could blame Housley for being irked after the contest?

His rested team was waiting at home for the Leafs, who had lost four out of their last five games, yet they couldn’t execute simple plays for the first 40 minutes.

The Sabres also finished a season winless (0-3-1) against their fiercest rival for the first time since 1986-87 (0-2-1). The Leafs have beaten the Sabres five straight meetings.

“We knew the magnitude of this game, the rivalry,” Housley said. “We didn’t execute early. We couldn’t make a wall play. We didn’t move our feet when we had the puck. We turned the puck over, and then it came right back after us and we were chasing. … Then when we did have the puck, we didn’t manage it very well.”

The Sabres, three days removed ending their seven-game losing streak, failed in their 12th try to win back-to-back outings for the first time since Dec. 11 and 13.

“I wish I could put it into words,” a visibly frustrated Hutton said of the Sabres’ inability to cobble together two wins. “It’s obviously frustrating. A lot of us wear it on our sleeve here.”

He added: “We get a big win and then we can’t answer the bell here today.”

Finally, the Sabres got going late. Winger Alexander Nylander scored 5:37 into the third period, one-timing a shot from the edge of the slot by Leafs goalie Garret Sparks.

Why did the Sabres suddenly come alive?

“We made a decision,” Housley said. “We came back, supported the puck off the breakout. We managed the puck in the zone. We got it behind them. We established the forecheck.

“That was the plan coming in. When you don’t do it for two periods, (it’s) going to catch up. It could’ve been a lot worse if it wasn’t for Carter Hutton.”

Nylander shook off a slow start – Housley switched the rookie’s line, putting him beside Mittelstadt and Vladimir Sobotka – to score his first goal this season.

Rookie Rasmus Dahlin’s assist on Mittelstadt’s goal was his 39th point, moving him past the legendary Bobby Orr for the second-most points by an 18-year-old defenseman.

Incredibly, the capacity crowd of 19,070 looked to be made up of about three-quarters Toronto fans.