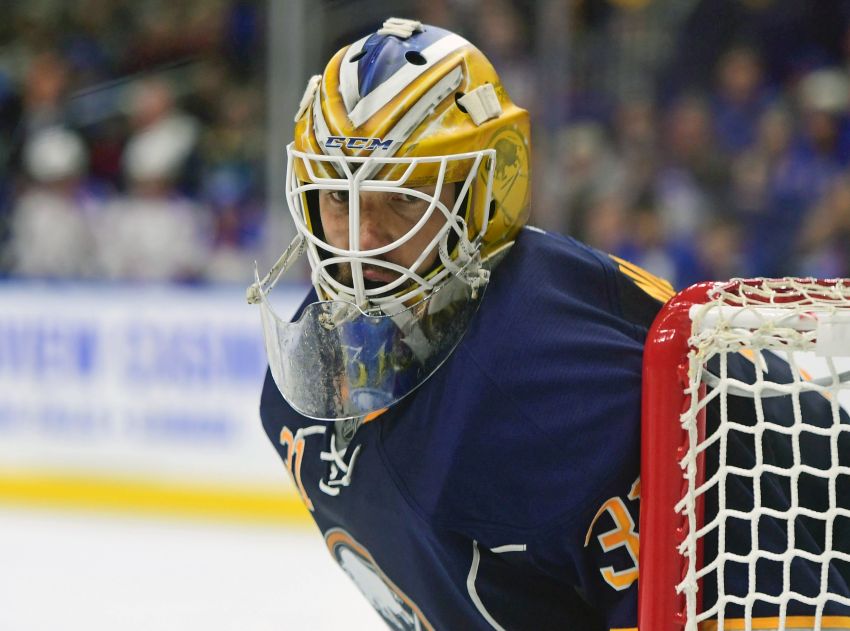 BUFFALO – Dan Bylsma’s knowledge of Anders Nilsson was limited before the Sabres acquired the goalie in July. Sure, the team did its due diligence on the Swede. But the coach mostly knew about the backup from watching him years ago.

“I saw him as a younger goalie in the Islanders organization playing against him,” Bylsma said Friday after the Sabres prepared for this afternoon’s tilt against the Winnipeg Jets at KeyBank Center. “I don’t know if he’s changed since then.”

Nilsson, in fact, has changed a lot over the years.

“Night and day,” said Nilsson, who has started the last two games, a win and an overtime loss.

Five years ago, the 6-foot-6, 229-pound Nilsson was a raw youngster shuttling between the AHL and New York. By 2014, with his progress stalling – “I kind of didn’t develop the way I wanted to,” he said – Nilsson jetted to the KHL, where he played 58 total games for Ak Bars Kazan.

“If I didn’t have a good year that year, I wouldn’t have been able to come back,” Nilsson said. “I developed a lot as a goalie that year. That year has definitely helped me a lot in my development. I don’t think I would’ve been here if I didn’t make that step.”

That stellar Russian campaign – his 1.71 goals-against average led the league – changed his career.

“It was huge,” he said. “It was a really good year for me. … I felt I needed an environment change. (The) KHL was the best option.”

Nilsson, 26, has become Buffalo’s best option in net some nights. He’s 6-3-4 with a 2.47 goals-against average and a .926 save percentage, which ranked eighth entering Friday’s games, in 13 appearances.

Lehner’s overall goal support, according to Buffalo Sabres Stats, a Twitter account, is slightly higher than Nilsson’s (2.20 a game versus 2.17).

It can be argued Nilsson, who was acquired from the St. Louis Blues for a fifth-round pick, is the last-place team’s biggest surprise this season.

Nilsson stopped 24 shots in Tuesday’s 4-1 road win in New York, a game the Sabres limited the Rangers to only seven scoring chances, Bylsma said. With Lehner a little banged up, Nilsson started again Thursday, stopping 39 shots in the Sabres’ 4-3 overtime road loss to the Chicago Blackhawks.

While Nilsson allowed the tying goal with 2:04 left in regulation and the winner 56 seconds into overtime, he made 19 saves in the first period, keeping his club afloat.

Sabres center Ryan O’Reilly added: “He stood on his head.”

So will Bylsma tab Nilsson, who started three straight games in late October, again this afternoon? He wouldn’t say Friday.

But given the Sabres’ commitment to Lehner – they traded a first-round pick for him and clearly want him to be their No. 1 – and his 37-save performance in a 3-1 win Oct. 30 in Winnipeg, Nilsson might sit again.

“He’s been excellent whether he’s been playing or he’s not been playing,” Bylsma said of Nilsson. “He’s been ready to play well every time he’s stepped in there.”

Nilsson’s habits and professionalism have impressed Bylsma all season. Mention his name to Bylsma, and he inevitably talks about Nilsson’s work ethic.

Nilsson usually showcases a competitive but calm style. Over the years, he has learned to utilize his massive frame to his advantage. That might be his biggest area of growth.

“I calmed my game down a little bit and tried to read the play more, trying to take advantage of my size and play a little bigger,” Nilsson said. “Usually when I get scored on, it’s because I have too much movement, I open up holes. I’ve been trying to pace myself and calm myself down.”