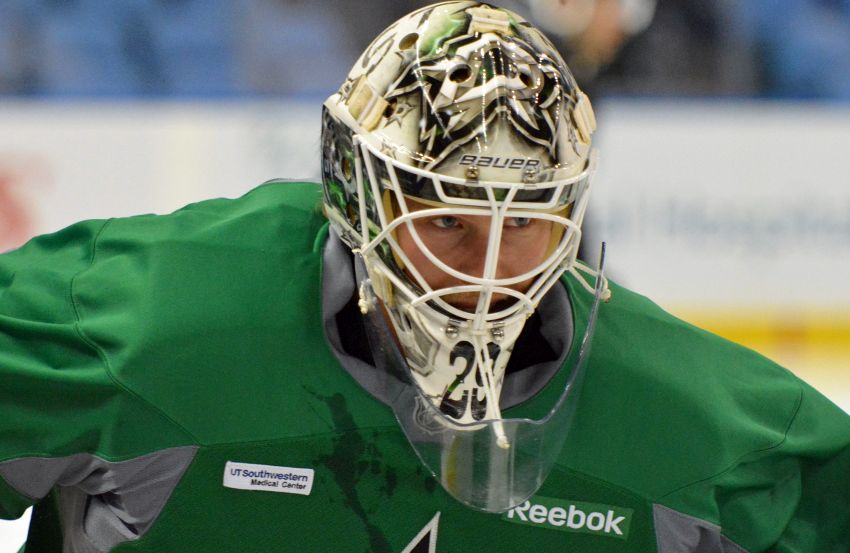 BUFFALO – For the time being, goalie Anders Lindback will likely take a backseat to Michal Neuvirth. With Jhonas Enroth gone, the Sabres plan to evaluate Neuvirth to see if he’s worth re-signing.

But an opportunity could materialize for the 26-year-old Lindback, part of Wednesday’s Enroth trade with the Dallas Stars, if Neuvirth plays well and gets dished or he falters. The Sabres need goalies badly.

Sabres general manager Tim Murray loves big goalies, and the 6-foot-6, 215-pound Lindback is one of the NHL’s tallest. That hasn’t translated to much success, however. The Sabres are the Swede’s third team since last season and the fourth in his five-year career.

“I know I can play on this level,” Lindback said Thursday inside HarborCenter following his first practice. “For me, I need games. I need to play and get in there. It’s tough … in the situation I was in in Dallas. I’m excited to be here.”

Lindback, a free agent following the season, could be running out of chances.

He struggled mightily all season in Dallas, posting some terrible numbers – 2-8-1 with a 3.71 goals-against average and a .875 save percentage – in front of one of the NHL’s worst defenses.

The Stars waived him earlier this season, allowing them to send him to their affiliate in Austin. He played seven AHL games, shuttling back and forth.

“Honestly, last couple of games I played in Dallas I feel like I played pretty good,” Lindback said. “I just haven’t gotten the numbers with me, and also I have only (seven) starts in the NHL this year. It’s really not in any way where you can compare that and say that it’s all over 40 games it’s going to be those numbers.

“You’re going to have bad games. In the long run, it evens out if you play well. For me, I feel like I’ve been playing all right. Just get out there and relax. I know I can do it, and I think I proved myself before.”

“It’s been up and down,” Lindback said about his career. “Obviously, that’s how some careers go. I feel real confident. I think every year I’ve got better. I feel like I’m a way better goalie now than I used to be. In my mind, that’s the most important thing, just focus on what I can do and how I can get better, can help this team to win more games.”

Lindback, like a lot of European goalies, was a low draft pick, a seventh-round selection, 207th overall, by the Nashville Predators in 2008.

Under the tutelage of noted goalie coach Mitch Korn, who worked with the Sabres in the 1990s, Lindback developed into a strong prospect in Nashville.

He debuted in 2010-11, playing 22 games behind 6-foot-5 Predators star Pekka Rinne, one of the NHL’s best. Naturally, because of his size and organization, Lindback drew a lot of comparisons to Rinne.

“I think he was most successful when he was with Nashville because not only was he able to mimic and shadow Pekka Rinne a little bit, but he had Mitch Korn there,” said Justin Goldman, a goalie analyst and consultant who runs thegoalieguild.com.

Goldman said Lindback’s a reaction-based goalie who relies on his instincts and reflexes to make aggressive saves in which he extends his lanky frame. Korn, Goldman said, recognizes natural talents and works around them.

When Nashville dealt Lindback to the Tampa Bay Lightning in 2012, he began working with goalie coach Frantz Jean, who teaches an economical, blocking mindset, Goldman said. Instead of simply reacting, Lindback was taught to fill and manage space.

“It went against the grain of his natural instincts, which is to be more of a reactionary-based goalie,” Goldman said. “So I think his wires got crossed a little bit in Tampa Bay.”

Lindback lasted two seasons and 47 games in Tampa Bay before signing with Dallas on July 1. Given the Stars’ awful defense, Dallas wasn’t a good place for him to fix his game. Of course, the Sabres’ defense is even worse.

“If you grow up playing one way your whole life, and then all of a sudden, in order to be successful you have to change that, it takes a time,” Goldman said.

Goldman has spent time on the ice with Lindback at a goalie camp and believes he could still become a strong NHL netminder.

“But it may just take a few more years,” he said. “I don’t if there’s teams out there that are patient enough. I don’t know if he’ll get the right coaching to make that happen, but you never know.”