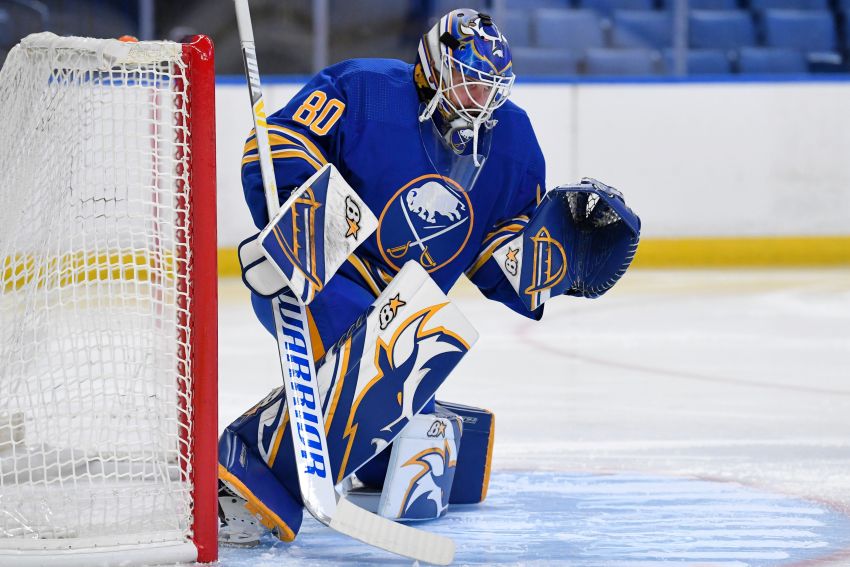 BUFFALO – Aaron Dell smiled as he recalled his unlikely journey. Having started at the bottom in the now-defunct Central Hockey League, the Sabres newcomer beat long odds to play just one game in the big leagues.

Today, Dell, 32, is a five-year NHL veteran who has made 114 appearances. Early in his career, he was one of the league’s best No. 2 goalies with the San Jose Sharks, compiling a 26-11-5 record over his first two seasons.

This year, Dell appears slated to back up Craig Anderson, 40, on the rebuilding Sabres.

But after leaving North Dakota following his junior year in 2012, Dell began his pro career three levels below the NHL in Allen, Texas. He parlayed a terrific rookie season – he backstopped the Allen Americans to a championship and was named the CHL’s top goalie – into opportunities in the ECHL and AHL and earned his first NHL contract in 2015.

“I hit every rung on the ladder,” Dell said following Monday’s sessions of training camp inside KeyBank Center. “I just kind of stuck with it and I was prepared for the chances that I got and I got rewarded with the next step.”

In signing Dell to a one-year, $750,000 contract July 28, the Sabres, who open the preseason tonight in Columbus against the Blue Jackets, are hoping he can recapture his early NHL form. He has struggled over the past three seasons, failing to post a goals-against average under 3.00.

Despite a rough stretch, Dell, who inked a two-way deal, will likely be on the Sabres’ opening night roster.

While Ukko-Pekka Luukkonen, 22, and Dustin Tokarski, 32, are also competing for roster spots, Sabres coach Don Granato said on Sunday that if the season started tomorrow, Anderson and Dell “would be one and two.”

Last year, Dell endured what he called a “pretty wild” season, winning just one of his seven appearances as COVID-19 wreaked havoc on the New Jersey Devils. Coincidentally, he beat the Sabres on April 8.

Dell never found any rhythm. After New Jersey claimed Dell on waivers from the Toronto Maple Leafs on Jan. 18, visa issues delayed the mandatory quarantine he had to complete.

“It was a lot a lot of sitting around last year,” said Dell, who also quarantined when he arrived in Toronto.

When he joined the Devils, a COVID outbreak paused their season for 16 days. He finally made his debut Feb. 21, nearly a year – 347 days, to be exact – since his last NHL outing.

“It was tough to get to get into a groove at all,” Dell said.

Not surprisingly, he registered awful numbers – a 4.14 goals-against average and an .857 save percentage – behind one of the NHL’s worst teams.

Still, signing the 6-foot, 209-pound Dell was a low-risk move for the Sabres. Even if his best days are behind him, he could help mentor Luukkonen.

“It was a good opportunity for me to come in and be able to have a chance to show what I can do,” Dell said. “I think it’s a young team and goaltending is one of those positions they have to mature into a little bit.

“I think that’s probably part of the reason with me and Craig is … we can kind of mold the young guys and stuff like that as older guys on the team.”

Dell became a familiar name to some Sabres fans before his first camp started. His decision to wear No. 30, popular ex-goalie Ryan Miller’s old number, ignited criticism on social media. The number, which Dell sported in San Jose, hadn’t been issued since Miller left in 2014.

When Dell was asked about the number – he has already switched to No. 80 – he replied, “I knew that was coming up.”

“I didn’t really realize the significance of it here with everybody, but I was more than happy to change it,” he said.

Dell said No. 80 “was just nice and available.”

“I don’t think I could think of anybody besides (ex-goalie) Kevin Weekes, really, that wore it,” he said. “So I figured I’d go with something that was going to be available no matter what.”