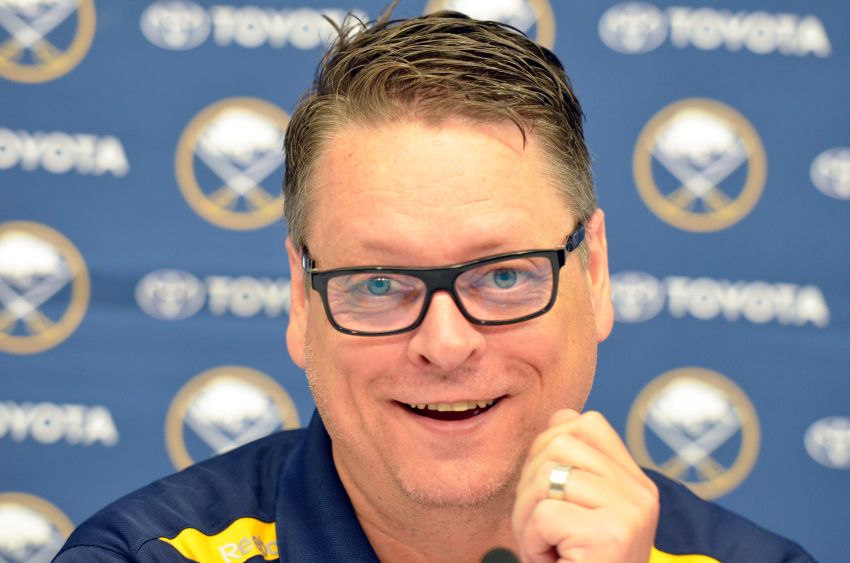 BUFFALO – In one week, general manager Tim Murray, like just about everyone else associated with hockey, expects stud defenseman Aaron Ekblad will be drafted No. 1 overall. Then the rebuilding Sabres have a franchise-altering decision.

Which slick prospect will they grab at No. 2?

Murray acknowledged the obvious, saying there’s a “very good chance” the Sabres will pick one of the dynamic centers available at the NHL Entry Draft in Philadelphia, either Sam Bennett, Leon Draisaitl or Sam Reinhart.

The bottom-feeding Sabres, fresh off the worst offensive season in modern NHL history, desperately need some elite talent up front. Of course, a team with only 10 regulation wins needs help all over.

“On this team and in Rochester, probably goaltending is what I say is not a pressing need,” Murray said. “But everywhere else we can use help throughout the lineup.”

While Murray isn’t targeting that No. 1 overall pick owned by Florida, with three second-round picks – 31, 39 and 49 – they have assets that could help them nab another first-rounder.

“I have been trying hard to do that,” Murray said about moving up. “The people I’ve called haven’t said no. But nobody’s called back and said, ‘Yeah, let’s do this deal.’ But I’ve got a lot of potential deals out there that have a first coming back involved, whether it’s in the 20s or the teens. I just feel like if I can get something in the 20s or teens, maybe you can do something with that, too.”

Rumors are swirling the Sabres, who have the league’s lowest payroll, would be willing to accept a larger contract in a deal for a first-rounder.

“I would make a trade for a larger contract to get a first-round pick involved, yes,” Murray said. “It’s still a trade. Every trade that every team makes, money is a consideration. So I’m not going to say that I would just make that trade to buy the guy out. If that happens, that happens. I may take a contract on to play here.”

Regardless of what happens trade-wise, the Sabres will be adding more money to the payroll soon.

Murray acknowledged he’s annoyed and sick of discussing how the Sabres will reach the mark.

The Sabres have five restricted free agents, including center Tyler Ennis, who will receive a big raise after leading the team in scoring. Murray also expects to lure some free agents. He said he’s already getting calls from agents asking about his team’s needs.

He hasn’t ruled out re-signing some of his own unrestricted free agents, either.

“I’m not thinking about them today,” Murray said. “There’s other things to think about today. I will get to that down the road. So that decision has not been made.”

So ask Murray about the salary floor in late September, he said.

Murray didn’t want to use a regular buyout on enigmatic forward Ville Leino to eat cap space, so the club used a compliance buyout Tuesday, meaning his $4.5 million hit has disappeared. The Sabres will be paying the Finn through 2019-20, however.

“If our plan is to be a competitive team after next year … six years down the road is not suitable to have that cap hit, and to keep him on the team after we had our internal meeting and decided he didn’t fit going forward, that was not either,” Murray said. “So this was the only option.”

Some other items Murray discussed:

“He’s talked to a lot of potential assistants in the last couple weeks,” Murray said.

– Agitating winger Patrick Kaleta, who tore his ACL shortly after the Sabres’ old regime banished him to the minors, is in good health and has been working out every day.

Kaleta was about to be recalled before he was injured. What’s his status now?

“He starts in camp here as a Buffalo Sabre, and we’ll see how he proceeds with that,” Murray said.