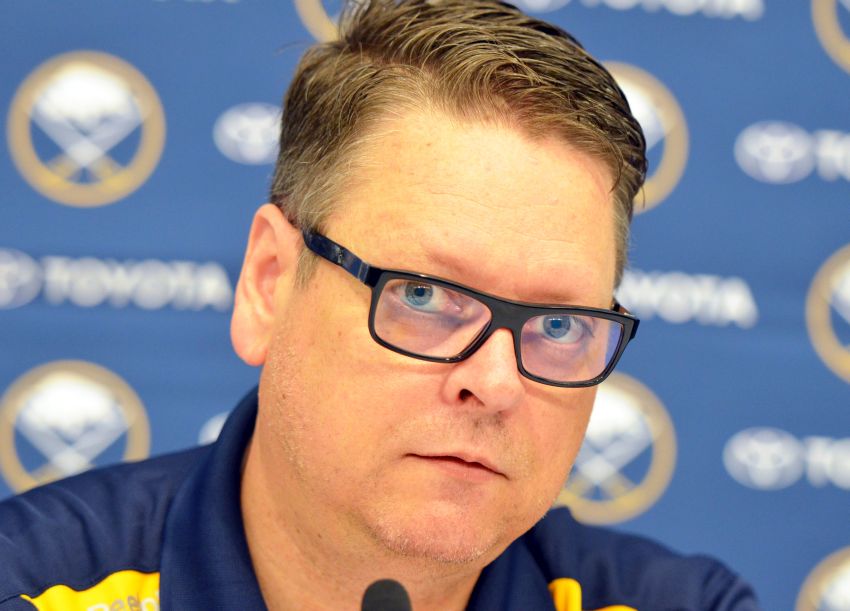 Tim Murray knows the Sabres will be in contention for a lottery pick again. ©2014, Dan Hickling, Olean Times Herald

– Murray said changes are probably coming to the NHL Draft Lottery next year, which could hurt the Sabres greatly. The NHL Board of Governors discussed the alterations Thursday.

The odds of the league’s worst team getting the No. 1 pick will drop from 25 percent to about 19 or 20 percent, Murray said. The tradeoff? The 30th team can’t fall past the No. 2 spot.

Murray, who begrudgingly expects the Sabres to be in contention for that top pick again, doesn’t want an immediate change.

He suggested it be implemented in three or five years. By changing it for 2015, you know which team you’re affecting.

Connor McDavid and Jack Eichel are expected to be the top two picks next year. Any changes must be approved by the league and the NHL Players’ Association.

– Murray said he’s ready for the draft. The Sabres have the No. 2 pick tonight and seven picks Saturday, including three second-rounders.

“I hope we’re not overprepared,” he said. “You can’t be overprepared, but we’ve talked about it, a lot of different scenarios.”

Right now, the Sabres have no other options and plan to use the No. 2 selection, he said.

The trade market, meanwhile, is eerily quiet. Murray, who’s done “lots of tire-kicking,” suspects a blockbuster could be in the works.

“The amount of talking that we’ve done for the last three weeks, for it to come down to this and look like we may not do anything, I don’t know if it’s disappointing or just I shouldn’t be surprised,” he said. “I’ve been around this a long time, but it’s quiet.”

Murray said he has “lots of irons in the fire” and “complicated ideas.” He said he’s not shopping players.

“Truthfully, I have gotten a couple of calls on our players, and I said I’ll listen,” he said. “I’m not going to be extremely aggressive in trying to trade young guys we think we can go forward with.”

Murray’s trying to trade for a couple of veterans who would bring skill and help the culture. He said he’s spoken to the agents representing former Sabres Matt Moulson and Steve Ott. Both veterans said they enjoyed their time in Buffalo.

If the Sabres secured another first-rounder, it would be on the floor tonight, he said.