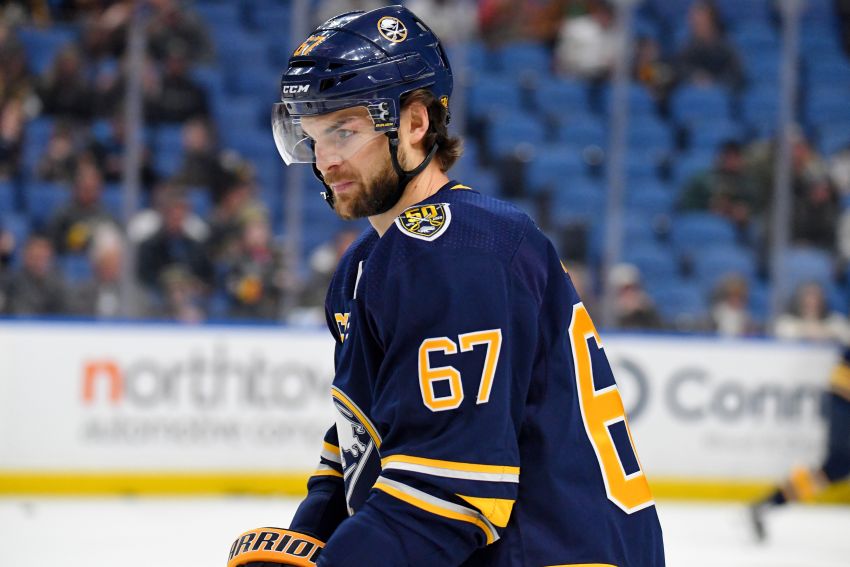 BUFFALO – Even after acquiring Michael Frolik earlier this month, Sabres general manager Jason Botterill would like to add another forward before the Feb. 24 trade deadline.

The Sabres’ depth up front, of course, was weak before Vladimir Sobotka and Tage Thompson both suffered season-ending injuries in November.

Right now, Victor Olofsson is week-to-week with a lower-body injury. Evan Rodrigues has been a huge disappointment, scoring just two goals and often sitting out as a healthy scratch.

The Sabres don’t many options.

Coach Ralph Krueger regularly dresses seven defensemen and 11 forwards, a lineup he utilized in Tuesday’s 5-2 win against the Ottawa Senators at KeyBank Center.

“We’re trying to add to our group there,” Botterill said Tuesday morning of acquiring a forward. “I think if we can add more to our sort of offensive mix, we’re certainly looking for it. I think also, too, when you can add to just our team speed up front, it’s another thing you look at.”

Frolik has meshed well with the Sabres, who have gone 3-4-0 with him in the lineup since dealing a fourth-round pick to the Calgary Flames on Jan. 2.

Frolik, who was acquired from the Calgary Flames for a fourth-round pick, has meshed well with the Sabres. The newcomer skated at right wing on the second line Tuesday beside center Marcus Johansson and Jeff Skinner.

This next stretch of games will likely determine whether the Sabres are buyers or sellers over the next four weeks.

The Sabres have a stiff challenge to roar up the standings and earn their first postseason berth since 2011. They’re in fifth place, 10 points behind the Florida Panthers for the Atlantic Division’s final playoff spot.

Still, fresh off their bye and the NHL All-Star break, the Sabres play nine of their next 10 games at home, where they’ve compiled a strong 14-7-3 mark.

So to Botterill, the Sabres’ task feels a little less daunting.

Not only have they established KeyBank Center as a tough rink for visitors, they won three of their last four games overall before the break.

But they need to quickly go on a tear to get back in the race.

“It’s an interesting dynamic,” Botterill said. “You go last week without playing games and other teams are going to be winning and they move up in the standings from you and sort of pull away. But then you have to take a step back and realize … we’ve won three of the last four, and I thought especially against Vegas, Dallas, Nashville – three strong Western Conference teams – we played fairly well in those games and could’ve come away with six points.”

After Rodrigues requested a trade earlier this month, Krueger said the Sabres “will work with the players that want to be here.”

But Rodrigues and defenseman Zach Bogosian, who also reportedly asked to be dealt, have kept playing, moving in and out of the lineup. Krueger scratched both players Tuesday.

Why do the Sabres keep dressing them?

“Hey, if a player does go to the media, it’s not going to change how we’re going to dictate things. If something materializes that improves our team, we’ll certainly make that move from that standpoint. But I also think that’s something the coaching staff reflects on every day and sort of sees what is the group that can help us win?”

Botterill said Bogosian and Rodrigues “have worked hard and tried to find a role on this team.”

“They had conversations with myself and, more importantly, with Ralph about just where their status is with our team here now and how we felt about some of their comments,” he said.

Following a slow start with the Rochester Americans – zero goals scored in his first six outings – center Casey Mittelstadt has found a groove, scoring five goals and eight points in the last 11 games.

Mittelstadt, who jumped from the NCAA to the NHL as a teenager in 2018, struggled defensively and produced four goals in nine points in 31 contests before the Sabres demoted him Dec. 15.

“Casey’s done a good job of integrating himself with the team in Rochester, he’s been very dialed in with the coaching staff there,” Botterill said of youngster’s first stint in the minors. “It’s something I’ve said that one of my comfort levels of sending Casey to Rochester was his relationship with (Amerks coach) Chris Taylor, and I think that’s blossomed here.

“I think over the last little bit he’s done exactly what we’ve talked about, he’s played in key situations.”

“But we want him to not just survive, we want him to excel,” he said. “We have high expectations for Casey, and Casey does for himself, too. What we’ve really liked about his attitude in Rochester is he’s being very proactive in what he needs to work on with the coaching staff, his new teammates there. Overall, it’s been a good experience for him.”

Botterill said losing Thompson, one of the Sabres’ top forward prospects, for the season “was extremely disappointing.”

Thompson, 22, underwent surgery on right shoulder earlier this month after injuring it in the waning minutes of his NHL season debut Nov. 17.

The Sabres kept Thompson up most of last season, playing him 65 times. After finishing on a tear in Rochester, he roared out of the gate this season with the Amerks.

While Thompson often struggled in the NHL, at least he was healthy and playing.

“That’s a tough thing right now is he’s just not playing in those games,” Botterill said. “And the great thing Tage did last year when we challenged him at the end of the year is he did that, he implemented that through the entire summer. And I thought there was a disappointment in him coming out of training camp, but it didn’t affect his game at all, (he) knew exactly what he had to work on, was excited about working on those skills.”

The Sabres have said Thompson will need five to six months to recover.