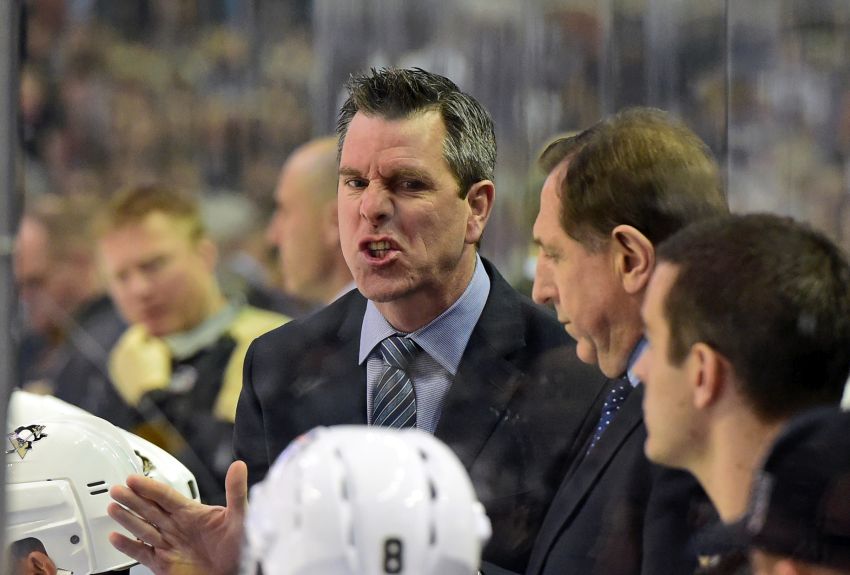 Mike Sullivan worked in player development and coached in the AHL before being promoted to Pittsburgh. ©2017, Hickling Images, Olean Times Herald

BUFFALO – When Sabres general manager Jason Botterill interviewed Mike Sullivan for Pittsburgh’s AHL coaching vacancy two years ago, thoughts of the candidate’s unsuccessful run as an assistant in Vancouver were fresh in his mind.

“I had an impression,” Botterill said Thursday of Sullivan, who spent a tumultuous season with the Canucks in 2013-14 beside embattled coach John Tortorella.

But Sullivan changed that impression. The former Boston Bruins coach had just spent a year as a development coach with the Chicago Blackhawks, a gig that helped him evolve.

“Instead of just sort of going home, watching TV, he immersed himself in a player development role with Chicago, and I think that made him an even better coach,” Botterill said. “He interacted with coaches at the college level, it’s a different perspective.”

The Penguins hired Sullivan for their affiliate in Wilkes-Barre Scranton, a team Botterill ran as part of his duties as Pittsburgh’s associate GM.

Sullivan lasted 24 games in the AHL, then quickly found himself back in the NHL trying to rescue the struggling parent club. Six months after his promotion, Sullivan led the Penguins to the Stanley Cup.

Right now, Botterill, who was hired as GM on Thursday, is looking for a Sullivan-like coach for the Sabres. To Botterill, Sullivan “demonstrates a lot of the traits that are key in the National Hockey League coach right now.”

“It’s that presence in the locker room, making sure people know that he is the main authority figure,” Botterill told Sportnet’s “Hockey Central” on Friday. “But it’s also about communication, especially in Buffalo here with so many young players there has to be an emphasis on development. …

“We talk so much about development (with) junior players or college players or the American Hockey League, and it’s an element that is kind of forgotten at the NHL level. I know it’s difficult with so many games and finding practice time, but whether it’s on the ice from a skill-development standpoint or focusing more on the video, development’s going to be a key attribute.”

Here are four names Sportsnet’s Elliotte Friedman recently mentioned as candidates to replace Dan Bylsma, who was fired April 20, and three others to consider.

Incredibly, the Sabres are looking for their fifth coach since February 2013.

Tocchet’s an assistant under Sullivan right now, so Botterill knows him well. The former NHL star has been around the league as an assistant, coaching four teams. He went 53-69-36 in just under two seasons as Tampa Bay’s head coach, his only head gig.

Tocchet, 53, pleaded guilty to conspiracy to promote gambling in 2006 and served two years of probation. The NHL never suspended him.

Still, if Sabres owner Terry Pegula, who recently preached he wanted “character” for his team, signs off on hiring Tocchet, it would certainly raise some eyebrows.

Housley’s hire would probably be popular in Buffalo, where he starred for the first eight years of his Hall of Fame career. But the former defenseman is more than a name.

Housley, 53, has earned kudos for his strong work developing Nashville’s talented defense corps, which attacks and scores. The maturation of Mattias Ekholm and Ryan Ellis has helped buoy the Predators to their first Western Conference final.

After serving four years as an assistant in Nashville, Housley might be the best coaching prospect in hockey.

Reirden, 45, is the associate coach of the Washington Capitals, who won the Presidents’ Trophy for the best regular-season record but lost in the second round to Pittsburgh last week.

Reirden joined the Capitals from Pittsburgh, where he served four years as an assistant after coaching Wilkes-Barre. Botterill might know him better than any candidate.

While reports haven’t linked Dineen, 53, to the Sabres, his career is similar to Sullivan in that he’s a former head coach who has paid dues in different roles.

After six successful seasons developing AHL prospects as coach of the Portland Pirates, including three under the Sabres, Dineen earned his first NHL head coaching gig with the Florida Panthers in 2011.

The Panthers won the division title in Dineen’s first season, but he was fired after a slow start in 2013-14.

Dineen has spent the last three seasons as an assistant with Chicago, winning the Cup two years ago.

Some former Sabres he coached have raved about him.

You would think if Ruff, the popular former Sabres coach, was a candidate, there would’ve been some rumblings by now.

Ruff, who was fired by the Dallas Stars last month, is worth some consideration.

Yes, Ruff, 57, already coached the Sabres for 16 years. But only two players – Tyler Ennis and Marcus Foligno – are left from his tenure, which ended in February 2013. He’s probably the most experienced coach on the market and has been successful playing the up-tempo style Botterill wants the Sabres to showcase.

Botterill wants to talk to Krueger, 57, according to TSN’s Pierre LeBrun. But would Krueger be interested in the Sabres?

After the Edmonton Oilers fired Krueger in 2013 after one season as coach, he moved from hockey to soccer, joining Southampton of the English Premier League. He currently serves as the club’s chairman.

Krueger has spent most of the career in Austria and Switzerland. In his only recent coaching job, Krueger earned positive reviews as he led Team Europe to a surprising second-place finish at the 2016 World Cup of Hockey.