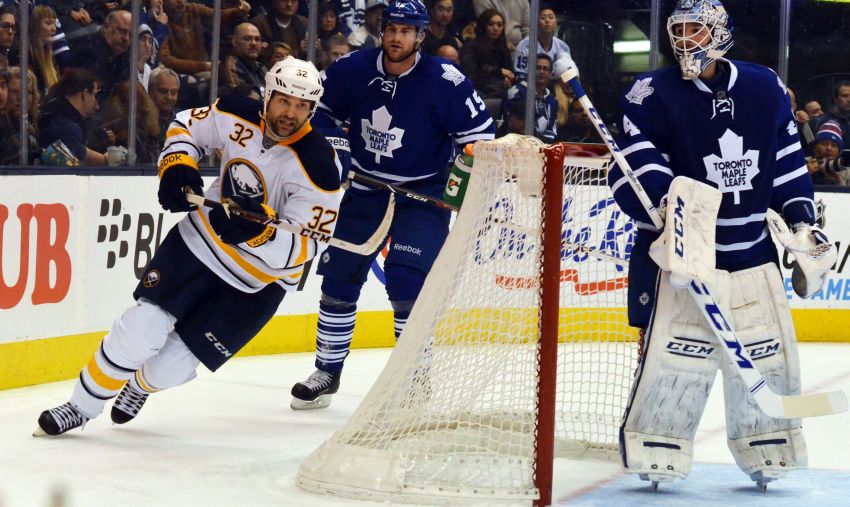 At 7:53 of first period in Friday’s 4-3 shootout loss to the Maple Leafs, Matt Ellis’ rebound trickled to Scott in the slot, and – much to the shock of the 19,405 fans watching – he beat Maple Leafs goalie Jonathan Bernier.

“I seem to do some special stuff in this building,” joked Scott, who ignited a preseason brawl here by chasing down Leafs star Phil Kessel.

Scott added: “You let instinct take over and you try to shoot it in.”

At that point, with their first 2-0 lead this season thanks to Scott’s rare score, it looked like the Sabres would run the reeling Leafs out of the Air Canada Centre.

The same fans cheered wildly 20 minutes later after the Leafs ended the second period up 3-2.

“A piece of crap second period, that’s what I’d call it,” Sabres winger Matt Moulson said. “That was one of the worst periods we’ve played all year. Obviously, they took advantage of that.”

Still, the Sabres fought back to earn a consolation point, tying it with 25 seconds left in regulation.

With the Sabres on their lone power play of the night and goalie Ryan Miller on the bench for an extra attacker, Steve Ott knocked Moulson’s rebound in after Tyler Myers pinched into the left circle.

“We made a heck of a run there late and we got our point,” Ellis said. “But there’s a fine line between winning and losing. To have a lapse like that in the second is not something that we want to be doing.”

“All these games, especially division rival kind of stuff like this, they’re going to be like that every single game the rest of the way,” said Ott, who scored his second goal in 17 games and fifth this season.

If Scott keeps playing like he has recently, interim Sabres coach Ted Nolan might keep awarding him regular ice time the rest of the way.

“It was nice, unexpected,” Scott said about scoring. “You don’t score many of them. So when you do it makes it a little more special.”

Scott, who hadn’t scored since Nov. 15, 2009, enjoyed one of his best games ever, skating a personal Sabres-high 12:39 beside Ellis and Matt D’Agostini.

“Everyone was really excited for Johnny,” Ellis said. “It was a big game for him. … To see him to be able to find the back of the net, we were pretty pumped for Johnny. He’s a big part of this team. He’s been counted upon more and more in the last little while to bring other elements to the team.”

“When a guy that helps chip in in the sense of fighting and being there and being a great teammate nightly, it’s always nice when he gets on the scoreboard,” Ott said.

Nolan said “you couldn’t draw” Scott’s completion of the three-on-two break “up any better.”

Moulson opened the scoring 7:01 into the game, beating Bernier in front after rookie Zemgus Girgensons fended off Peter Holland down low to create the chance.

The Sabres outshot the Leafs 15-10 during the opening 20 minutes.

But the Leafs, who had one regulation win in their last 18 games, roared back.

“The first period, I thought we played our system to a tee,” Ellis said. “We got pucks in behind their D. It was nothing fancy, a workmanlike attitude. We had a lapse there in the second. We played into their transition game. We allowed them back into the game.”

Jake Gardiner’s one-timer from the point made it 2-1 at 11:38. Holland tied it from the left circle at 16:25 after Jamie McBain lost the puck near the boards.

Then Kessel beat Miller, a likely USA Olympic teammate at the upcoming Sochi Games, from the left circle at 19:43 with Scott off for high-sticking.

The Leafs outshot the Sabres 17-5 during the second period and 42-35 overall.