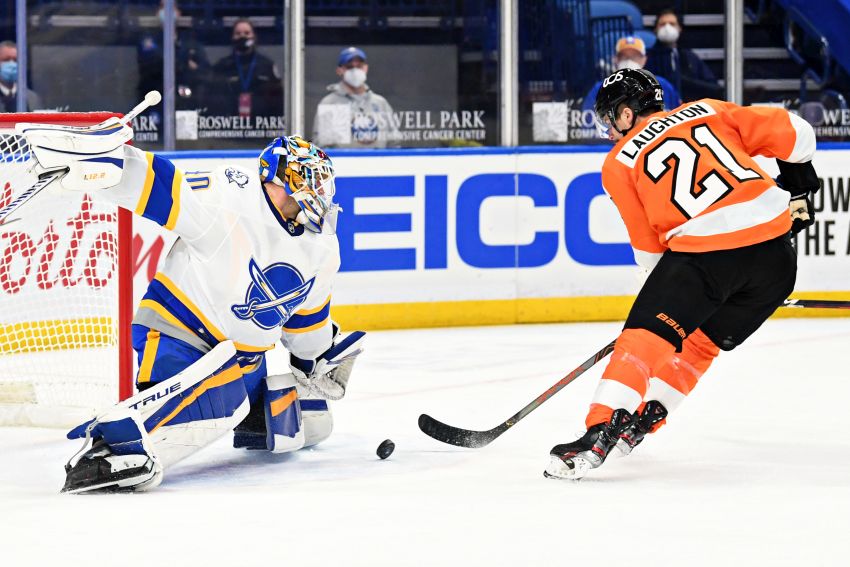 BUFFALO – The Sabres’ grueling schedule doesn’t let up for weeks. Fresh off Saturday afternoon’s ugly 3-0 loss to Philadelphia, they play the Flyers again today, their ninth game in 14 days since their COVID-19 pause ended.

The Sabres, incredibly, don’t have two consecutive days off until the first week of April. They have four more games next week. The jam-packed slate doesn’t offer them an opportunity to reset and enjoy any quality practice time.

Clearly, the dizzying stretch has drained the Sabres mentally and physically. They looked downright awful Saturday against the Flyers inside KeyBank Center, generating little offense and showcasing wretched puck management.

So expect the Sabres to inject some fresh bodies into the lineup. Captain Jack Eichel, who’s day to day with a lower-body injury, could return today after a two-game absence. They could also recall some players and start a different goalie.

On Saturday, backup Carter Hutton subbed for No. 1 goalie Linus Ullmark, whose lower-body injury will sideline him a month, coach Ralph Krueger said prior to the Sabres’ sixth loss in nine games (2-6-1).

“We might might make a couple of changes where we can add some energy,” Krueger said on a Zoom call. “We haven’t made a final decision yet on the goalie. So I think injecting some new energy is almost necessary in this situation. We need to stay optimistic and positive about us being able to recover tomorrow, and it’s the only way we can get ourselves back into this quickly.

“But it is certainly one of the bigger challenges I’ve seen as a coach, because the heart seems to be in the right place, but the energy just isn’t there to match that. We got to make sure that frustration doesn’t come into our game and that fight comes out early in the game. We need some success offensively.”

After the Sabres scored seven goals in two games, an offensive bonanza by their standards, they were shut out for the second time this season by Flyers goalie Brian Elliott, who made 23 saves Saturday.

“They were better in every zone,” Sabres defenseman Rasmus Ristolainen said of the Flyers.

Incredibly, Elliott, who also blanked the Sabres on Jan. 19, improved to 15-2-2 in his career against Buffalo. He has shut out the Sabres four times.

Carter Hart, a goalie the Sabres chased from their 6-1 win Jan. 18 in Philadelphia, will start for the Flyers this afternoon, coach Alain Vigneault said.

The Sabres have scored just one goal or been shut out four times since their COVID-19 pause ended. In their first two games back, the New York Islanders limited them to one total goal.

“Guys are competing,” Sabres center Eric Staal said. “For whatever reason, it seems like we’re just pedaling really hard uphill. When you’re struggling with confidence and you’re struggling offensively, I feel like a lot of times with a lot of guys you’re guilty of maybe doing too much and just not executing on the smaller details.”

Krueger wants to keep everything small. The Sabres have a daunting challenge ahead to climb up the stacked East Division and move into the playoff chase.

“Picture small, real small, and anything else is just too destructive,” Krueger said. “Again, we knew we were up for a battle coming out of the COVID break and adding players one at a time through all of this. It was there for us to have a better entry into this phase.

“We all know of about those two Islanders games that went awry, and now it is fight time. But big picture for how many games in how many days or whatever, we have no time for that kind of conversation at the moment. Maybe on Monday we can do a little regroup.”

After a day off Monday, the Sabres begin a five-game road trip Tuesday against the New York Rangers. Following that game, they play the Islanders three straight games.

Hutton could see the bulk of the upcoming action. He had a strong outing Saturday, making 36 saves.

Sean Couturier opened the scoring 14:22 into the game. When Shayne Gostisbehere scored 2-0 14:33 into the second period, it felt like the Flyers had a five-goal lead. Scott Laughton breakaway goal at 18:54 into the second sealed the game.