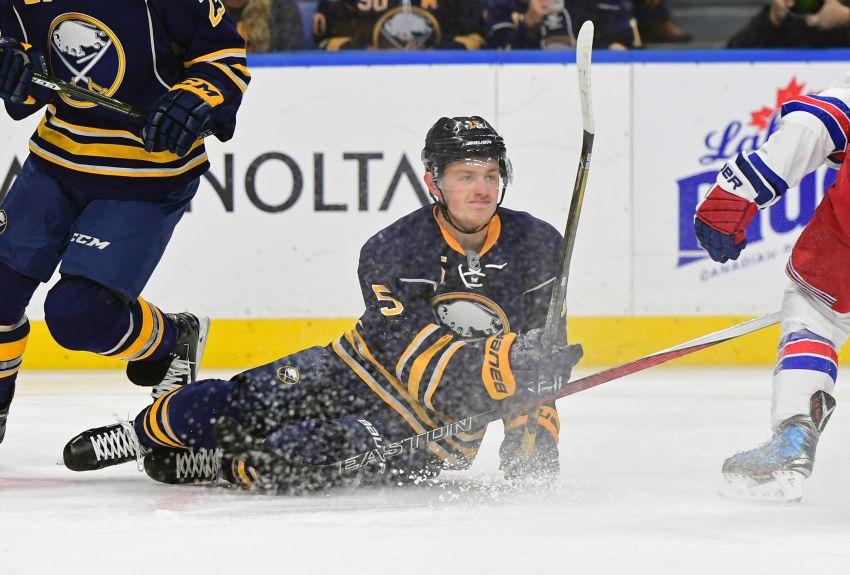 BUFFALO – It was Sunday morning, more than two days before center Jack Eichel finally returned from his 21-game absence, when coach Dan Bylsma first noticed a change in his Sabres, owners of the NHL’s worst offense.

Thanks to Eichel’s presence in practice, Bylsma said he saw “confidence and an excitement brewing about us being able to score goals and how we need to play.”

Never mind the Sabres had lost eight of their last 10 games at that point. Never mind they had scored two or fewer goals in nine of those contests.

The good feelings carried over, the confidence kept building throughout the week.

“You felt that the next day,” Bylsma said Friday inside HarborCenter. “You felt that in (the) morning skate. Now you’re feeling it in the game, and that’s a big thing to have.”

The Sabres have quickly morphed into a different team with Eichel, 20, back in their arsenal. Not only are they winning, they’re playing exciting hockey.

Since the second-year star returned from a high left ankle sprain Tuesday, the Sabres are 2-0 and have scored nine goals, a whopping 19 percent of their season total.

Eichel, of course, is scorching entering this afternoon’s tilt against the Boston Bruins inside KeyBank Center, having already compiled three goals and four points.

He scored the tying and winning goals late in Thursday’s 4-3 triumph against the New York Rangers and also had a goal and assist early in Tuesday’s 5-4 victory in Ottawa.

While it’s a small sample size, the games have offered a glimpse into what kind of team the Sabres could be with a healthy forward lineup.

After so many low-scoring games – they’ve played eight 2-1 contests – participating in two high-scoring, rollicking affairs has been fun.

“They’re having fun scoring goals,” Bylsma said. “I don’t think we anticipate every game being five goals. We’re certainly going to try to outgun the other team in trying to get to five first.”

But at least the Sabres have shown they can play a high-octane style.

“It’s games like that where we have to show teams that we have to keep coming no matter what,” Foligno said. “Right now, we got to build for the playoffs. That’s our goal here. That hockey (Thursday) night felt like playoff hockey.”

Yes, playoff chatter is alive again following two strong wins. The Sabres rank last in the Atlantic Division and 15th in the Eastern Conference, but they were only four points out of the final wild card spot as of Friday afternoon. Of course, six teams are ahead of them in the race.

Teams out of a playoff spot around Dec. 1 historically don’t climb back in. If the Sabres roar back up, they need to compile long winning streaks. They haven’t won more than three straight games this season.

“We need to rattle off a few wins in a row,” Eichel said. “We’ll put ourselves in the picture. (This is) what good teams do. … Teams that are in the playoffs year in, year out, they don’t win two in a row. They rattle off five or six in a row.”

The Sabres looked like a playoff team Thursday, attacking the Rangers in waves, one line after another. By the second period, they began dominating one of the NHL’s best clubs.

“We got to playing really one shift after another, each line playing in the offensive zone, playing with speed,” said Bylsma, who believes that period was the Sabres’ best all season.

Bylsma added: “Really took control of the game, took over the game.”

When the Sabres took over the game, the crowd inside KeyBank Center erupted like it did 10 or so years ago when the Sabres won consistently.

“It’s awesome, especially when the crowd gets behind you and starts chanting, it just puts you in the game more and gets you emotionally involved,” Foligno said. “That plays into our favor. We have a lot of guys on the team that thrive off that stuff. Obviously, it keyed the comeback.”

Eichel added: “We got to keep winning to keep the atmosphere like that. Keep winning, keep scoring goals and hopefully the crowd will get into it.”