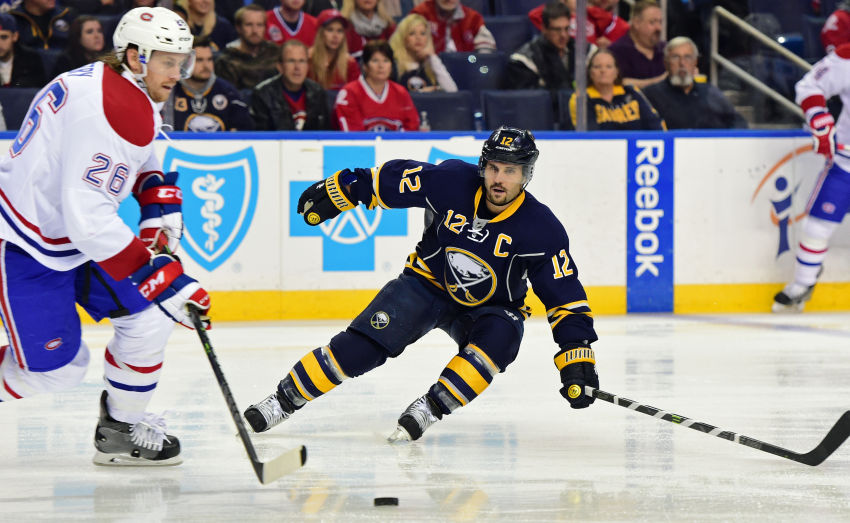 Whatever the case, Ennis, who has zero goals in the last seven games, keeps trying to do too much.

“I think he’s trying to make a lot happen with every time he touches the puck,” Bylsma said Wednesday. “He has that mentality and (is) probably trying to shoulder the load a little bit.”

Ennis, whose freelancing has drawn comparisons to former Sabres enigma Maxim Afinogenov, might be trying to pick up the slack for some of the team’s other struggling forwards.

Entering tonight’s road tilt against the St. Louis Blues, the Sabres have scored 40 goals in 18 games, 2.22 a contest. That’s a 182-goal pace. For some perspective, that would be the third-lowest full-season total in franchise history after an NHL record-low 150-goal 2013-14 season and a pathetic 154-goal campaign last year.

The NHL’s No. 26 offense has been boosted by the league’s No. 3 power play. The Sabres have scored 14 times on the man advantage. Their even-strength scoring ranks among the league’s worst.

“We need more offense five-on-five for everybody,” Bylsma said inside the First Niagara Center.

Forwards are struggling across the board.

Only two – centers Jack Eichel and Ryan O’Reilly, with six each – have scored five goals. O’Reilly has the Sabres’ only two goals in the last two games, both power-play scores.

Sabres defenseman Rasmus Ristolainen, with four goals and 11 points, is the second-leading scorer behind O’Reilly, who has 14 points.

Consider some of these low outputs from Sabres forwards this season, especially the wingers:

– Captain Brian Gionta, who had six goals and 16 points in his final 14 games last season, has one goal and five points in 15 contests. The winger scored his first goal in his 13th appearance.

– Injured center Zemgus Girgensons, who had 15 goals and 30 points in 61 games last season, has one goal and two points in 17 appearances.

– Center Johan Larsson, who had five goals and 14 points in his final 20 games last season, has zero goals and three points in 17 appearances. Larsson has also spent time on the wing.

– Center David Legwand, in the final season of a two-year, $6 million contract, has zero goals in 17 games.

– Winger Matt Moulson, in the second season of a five-year, $25 million contract, has four goals and seven points in 18 games.

– Ennis, who scored 20 goals in each of the last two seasons, has three goals and 10 points in 16 games, hardly the numbers he wants in what is supposed to be a breakout campaign.

To help ignite Ennis and Larsson, who played together late last season, Bylsma paired them together again Wednesday with Foligno.

A day after Ennis went offside late in the Sabres’ 3-1 loss to Dallas, negating Sam Reinhart’s game-tying goal after a coach’s challenge, he was still upset. Ennis also went offside in last Thursday’s 3-2 win in Florida, erasing his own goal.

“It was my goal that I screwed up on,” Ennis said. “Now we lose the game and we take a goal away from Reino. It bugs me a lot more.”

Part of the Sabres’ problem is O’Reilly, their top offensive threat, usually plays against the opponent’s top line. He shadowed the Stars’ Jamie Benn and Tyler Seguin, the NHL’s second- and third-leading scorers, all of Tuesday.

“That’s something we have to do a better job of, getting in situations where we can take advantage of a matchup and get people in the right spots to have success,” Bylsma said. “It’s tough. It’s not the ideal situation to play Ryan O’Reilly against a top line in the league and ask him to check the Benn-Seguin line.

“This guy’s also trying to score goals for us as well. … It’s taking away from getting offense at the other end. That has to be distributed throughout the team.”

Getting a shooting mentality back would help the Sabres. After briefly leading the NHL in shots, they’ve dipped to ninth place with 30.5 a game and have been outshot five straight games.

“(We need to) just simplify and continue to do the simple things by shooting from everywhere,” Sabres winger Jamie McGinn said. “Dallas is a perfect example. They lead the league in shots because they do shoot the puck from everywhere, they put a lot of rubber to the net, eventually good things go in.”