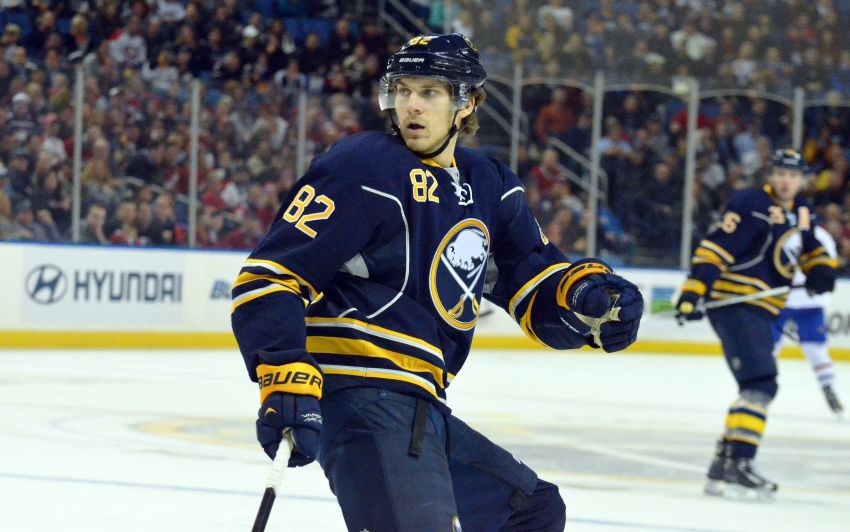 BUFFALO – It was more of a learning tool than a true benching. When Ron Rolston scratched Marcus Foligno on Thursday, the interim Sabres coach took his surprised rookie aside.

Instead of simply telling Foligno, “You’re not playing tonight,” Rolston analyzed the winger’s play with him.

“He showed me a lot, what I could bring, where my good things I do on the ice and things that I got to start doing,” Foligno said Friday. “It was a good learning tool.”

The two enjoy a strong trust. Rolston, who was promoted from the Rochester Americans on Feb. 20, has coached most of Foligno’s 132 professional games.

The 21-year-old credits Rolston’s AHL tutelage for much of his development. Foligno roared into the big leagues 51 weeks ago, scoring six goals and 13 points during a memorable 13-game stretch.

“Right from the get-go he said he has a lot of faith in me,” Foligno said. “So I trust him. He’s a great teacher, and he’s helped me out a lot.”

Within days following his recall from the Amerks last March, Foligno morphed into one of the NHL’s top power forwards.

But Foligno has struggled much of his first full season, compiling only one goal and eight points in 22 games. He hasn’t scored since Jan. 27, a 17-game drought.

“I believe that I deserved it,” Foligno said.

Rolston awarded Foligno some good time in his return Saturday, skating him on the top line beside Cody Hodgson and Jason Pominville for much of his 15:13 on the ice. Foligno thumped a couple of opponents in the Sabres’ 4-3 shootout triumph over New Jersey.

“I think they expected more and they want more,” Foligno said. “I thought (Saturday) I got back to my game, being physical and being in front of the net.”

Rolston added: “It’s a work in progress. I saw some good things out there (Saturday).”

What exactly has happened to Foligno this year?

For starters, last season’s torrid start was probably a bit unrealistic. He was skating beside Tyler Ennis and Drew Stafford, the NHL’s hottest late-season combination. The trio has already been broken up twice this season.

Foligno might ultimately be more of a 25- or 30-goal guy who produces or around 50 or 60 points. Still, he should be more of a force.

“He’s a player that can be a dominant hockey player in this league, and he was when he came up to Buffalo last year,” Rolston said Friday. “In order to do that, he’s got to play a certain way. He hasn’t been able to do that thus far. We have full confidence that he’ll be able to get that game back. …

“(He’s got to) work consistently on doing the things that make him a good hockey player. That’s being a player that can be north and south, get to the net, attack the net, be good on the walls in our zone and just be a presence for us. …

“Marcus, I mean (he has) a ton of pride, a ton of character, and I know that he’s a player that’s going to bounce back. He’s going to be a great player in our organization.”

Foligno’s at his best zooming around the ice utilizing his 6-foot-3, 227-pound body.

“That’s the biggest thing,” Foligno said. “I’m dangerous when I move my feet. I think previous, before being scratched, I wasn’t doing that. So I got to make sure I’m not comfortable. I’m always on my toes. That’s how I got to be from here on.”

Foligno also believes he “was just trying too much.” Simplifying his game will help.

“I got to do a simple play,” he said. “When I’m a simple player, I’m effective. That’s using my speed on the walls and battling pucks, and I think, for myself, I was losing a lot of battles. That’s not how I play.”

At this early stage of his career – while it sometimes feels like he’s been around forever, Foligno’s only played 36 NHL games – he’s still trying to figure out his style.

“Being a scratch has taught me a lot,” Foligno said. “I think in the beginning of the year I might’ve been getting caught in the middle of trying to be physical, trying to be offensive, trying to be defensive. I just got to play my game. That’s going in, winning battles, getting pucks back to the D and just using my teammates.”