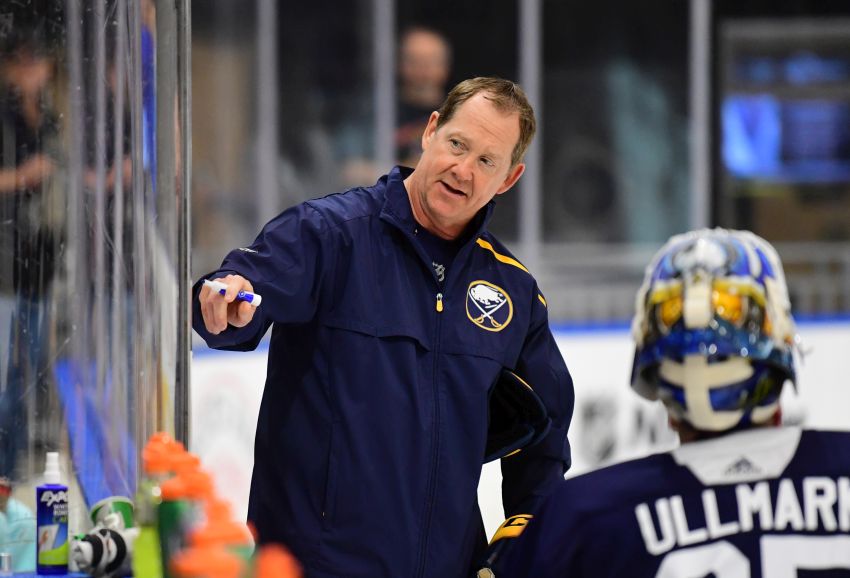 BUFFALO – A year ago, coach Phil Housley and his staff were so busy installing a new system and teaching during training camp, the Sabres never established much of a pace that could lead to regular-season success.

Not surprisingly, it hurt the Sabres, who plodded through a miserable campaign and wound up finishing dead last in Housley’s first year.

This year, even with a slew of new faces, most of the roster knows Housley’s system, meaning the Sabres can go full-throttle throughout their early practices.

The Sabres skated aggressively during Friday’s opening sessions inside HarborCenter.

“I mean, it was a tough go,” Housley said. “Both sessions (had) a lot of skating after the play, which we’re trying to encourage our guys. Part of our identity is back pressure and reloading them from the offensive zone of the ice. You could see a lot of the drills the guys were bent over. We pushed them to the limit in each drill and then we could see that the pace was going down, so we let them get some water, regain their composure and their wind.

“It was a tough go today, but I’m really pleased the way the guys responded. These guys are ready to go. They’ve trained hard throughout whole summer. They know what’s at stake, there’s competition for places. Everybody’s trying to make a good first impression.”

Of course, it helps most of the Sabres’ new additions possess speed, a critical asset in today’s game.

“It was high-temp, high-paced,” Sabres defenseman Jake McCabe said of his session. “Guys were going up the ice competing and that’s all you can ask for, especially on Day One when you’re knocking off the rust a little bit.”

The Sabres announced Friday an upper-body injury will sideline defenseman Matt Hunwick, an offseason acquisition from the Pittsburgh Penguins, for the first part of training camp.