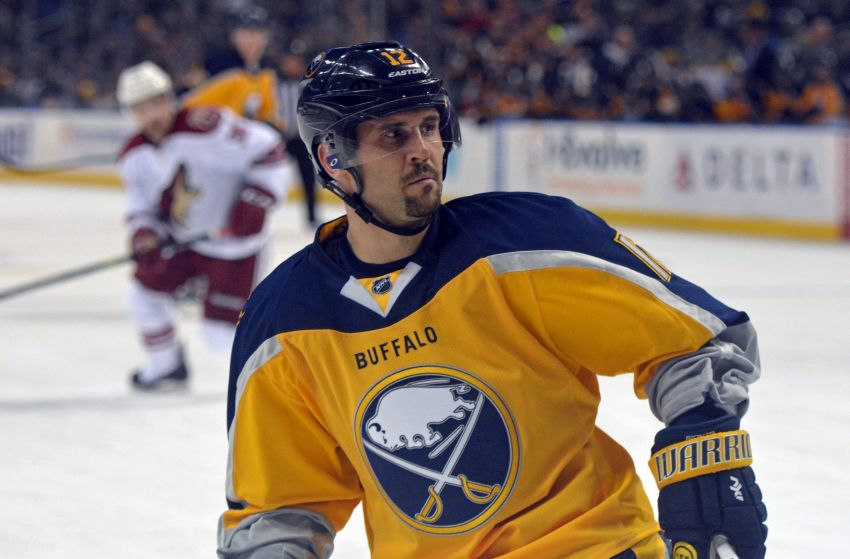 Gionta played almost 25 minutes in the Sabres’ 4-3 overtime loss Thursday, a game in which many hometown fans rooted for the Arizona Coyotes, creating a bizarre scene inside the First Niagara Center.

Surely, the veteran heard the loud cheering for the opposition.

Coach Ted Nolan said he was too focused on the game and couldn’t hear the crowd, which wanted the 30th-place Sabres to lose so they could cement the first or second pick in June.

But for many Sabres fans, Thursday’s loss, the 54th this trying season, was something special. The 29th-ranked Coyotes moved six points up, virtually guaranteeing the Sabres either Connor McDavid or Jack Eichel.

The crowd’s behavior – when was the last time home fans openly rooted for the opposition? – has garnered some unwanted national attention from major outlets.

ESPN, which normally devotes very little time to the NHL, showed highlights early during “SportsCenter.” Deadspin.com, SI.com and Yahoo! also picked up on it.

So far, only Sabres defenseman Mike Weber, who called the crowd’s behavior a “whole new low,” has spoken ill of the fans.

“I don’t think you can let anything outside the dressing room and off the ice affect how you approach the game,” Sabres winger Matt Moulson said. “We are professionals. A lot of people have things to play for. There’s a lot of different reasons to bring it every night.”

Thursday might reverberate around the league. Could free agents pass on signing with the Sabres? Most players, of course, love Buffalo once they get here. Still, the city doesn’t have the best reputation around the league.

Gionta and Moulson, two respected veterans, picked the Sabres in free agency on July 1, buying into a vision for the future.

“I’ve nothing but enjoyed my time with the organization,” Moulson said. “Sometimes you go through the hardest time before the best times arrive.”

Nine months ago, Gionta talked about competing for the Stanley Cup down the road.

“It’s been a long, frustrating year, for sure,” Gionta said. “The position that we’re in, no one wants to be here and obviously no one anticipated that. For sure, it was tough to swallow all year and be in the position we’re in. But you got to continue to look forward.”

“That’s why you continue to do what you need to do,” Gionta said. “You continue to be a professional and go about your business. It’s about, at this point, making sure you’re not taking any steps backwards into next year. You got to try to instill that culture of winning, that losing’s not acceptable.”

Somehow, despite the constant losing, the Sabres have kept giving strong efforts. Naturally, the losses wear on them. But they also seem happy.

That’s no coincidence to Nolan.

“When I first got here, we talked about changing the culture a little bit and changing the attitudes around here, and not just giving things to people and making them work for it,” Nolan said earlier this week. “I think they feel good because they’re going home at night knowing they give what they have to give and come here.

“You should enjoy what you do for a living. These guys are in a very special place in their lives right now. They’re playing in the National Hockey League. They’re getting well compensated for it. The only thing we ask is they come to practice and work and give what they have to, and you do that, you’re usually a happy soul.”

One thought on “Sabres focused on future, not fan support”