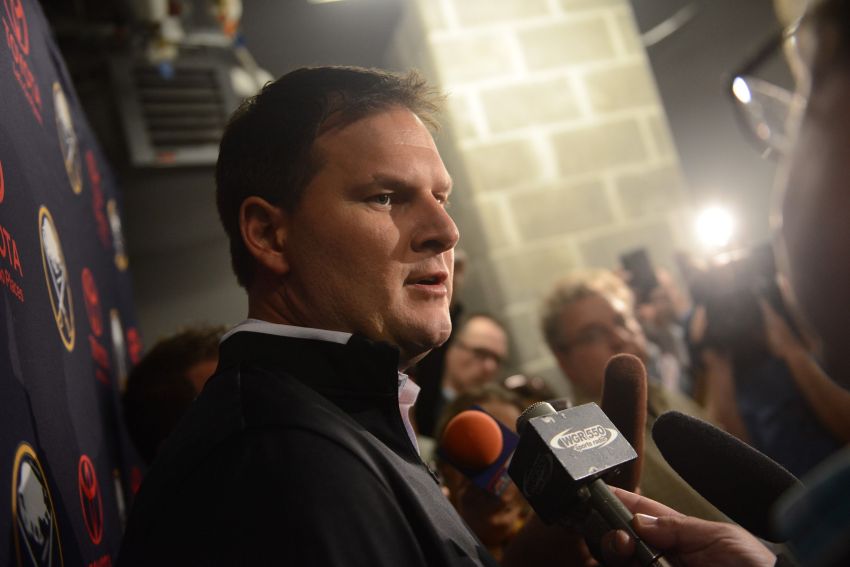 In a stunning move this morning, the Buffalo Sabres fired general manager Jason Botterill after three seasons and replaced him with Kevyn Adams, who had been serving as the team’s senior vice president of business administration.

“This morning, we informed Jason Botterill he will no longer be the general manager of the Sabres,” Sabres owners Terry and Kim Pegula said in a statement. “This decision was made after many candid discussions with Jason during a full review of our hockey operation. We recognized we have philosophical differences regarding how best to put ourselves in a position to compete for a Stanley Cup. So, we decided to make this change.”

The Sabres also fired assistant general managers Steve Greeley and Randy Sexton, according to The Buffalo News and other outlets.

Another update: The Sabres have also fired Ryan Jankowski, their director of amateur scouting, and much of their amateur scouting staff, according to Sportsnet’s Elliotte Friedman.

Just three weeks ago, after Kim Pegula told the Associated Press that Botterill would return, he conducted an end-of-season news conference on Zoom. The Sabres finished 25th overall, missing out on the 24-team qualifying round the NHL plans to utilize if it can start restart the season this summer.

If the Sabres had qualified, Botterill would still likely have a job.

The Sabres, of course, have missed the playoffs nine straight seasons, the league’s longest streak. Adams is the fourth GM to have served under the Pegulas since they purchased the team in February 2011.

That number illustrates the dysfunction that has engulfed the organization under the Pegulas.

“We are excited to see what they can do together as we reconfigure our hockey operations,” the Pegulas said of Adams. “We have the benefit of this long 2020 pause to take time to reorganize and re-energize our hockey department. We recognize the importance of this offseason with so many player decisions to be made.”

The Pegulas, Adams and Krueger are scheduled to hold an introductory news conference on Zoom at 2 p.m.

Adams, 45, had been serving as vice president and the director of the Academy of Hockey at Harborcenter before being promoted last year.

The Clarence native played 540 NHL games over parts of 10 seasons, winning the Stanley Cup with the Carolina Hurricanes in 2006. He also served as a development coach with the Sabres before moving up to assistant coach for two seasons.

“We have had the pleasure of watching Kevyn build his post-playing career over the past nine years under multiple roles throughout our organizations,” the Pegulas said. “We are confident Kevyn and Ralph will work together to build a consistent contender. As always, we are here to provide the necessary resources.

“Our fans deserve better, and we are all tasked with the burden to improve and provide them a consistent, contending team for years to come.”

The Pegulas, of course, have zigzagged all over in their attempts to build a winner, hiring and firing while constantly changing philosophies. Nothing has worked.

Bringing in Botterill, 44, to replace former GM Tim Murray in 2017 was lauded. Botterill, who also played for the Sabres, was regarded as one of the NHL’s top young minds. In Pittsburgh, he quickly moved up to associate GM in the Penguins’ front office, winning three Cups.

But the Sabres kept struggling under Botterill’s watch, cementing their place as a laughingstock. They finished dead last in 2017-18.

After a very brief resurgence – the Sabres won 10 straight games in November 2018 and ranked first overall – they imploded, missing the postseason.

Botterill responded by firing coach Phil Housley and reshaping the roster. Following another hot start this season under Krueger, they fell apart.

Trading versatile center Ryan O’Reilly, of course, helped seal Botterill’s fate. The deal is one of the NHL’s worst in recent memory.

Botterill dished one of the league’s top players to the St. Louis Blues for prospect Tage Thompson, a first-round pick and forwards Patrik Berglund and Vladimir Sobotka.

O’Reilly, who was exhausted by the losing he experienced in Buffalo, won the Cup last season and earned Conn Smythe Trophy honors.

Berglund, meanwhile, quit the Sabres two months into his first season. Sobotka contributed little and likely won’t be re-signed. Thompson and defenseman Ryan Johnson, the first-rounder, are strong prospects. The trade can pay some dividends.

Still, players who possess O’Reilly’s talents are coveted. The Sabres are still looking for his replacement.