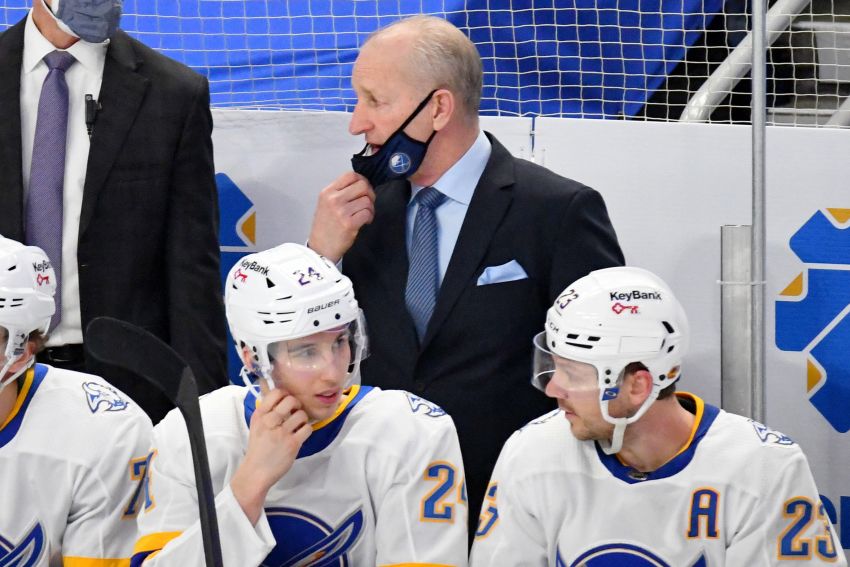 The Buffalo Sabres fired coach Ralph Krueger this morning in the midst of a stunning stretch in which the hapless team has lost 12 consecutive games and 16 of 18 since its COVID-19 pause ended.

Adams said a search for Krueger’s replacement will begin immediately.

The Sabres own an awful 6-18-4 record and rank dead last in the NHL. They will almost certainly tie a league record by missing playoffs for the 10th straight season.

“It felt right that it needed to be done now,” Adams said on a Zoom call this morning. “I think we could talk about could have been done before. For me, this is about results that haven’t been good enough and I look and evaluate everything and I was trying to take a real, honest, fair evaluation, understanding the adversity and the situation our team was in, taking it all into account.

“But it felt like the right time now and this is about all moving forward. This is about, how do we improve? I do believe every crisis is an opportunity for positive chance and this is a chance for us to move forward and to begin to get this thing pointed in the right direction.”

The Sabres compiled a 4-4-3 mark in January, a solid start by their low standards. But they quickly fell apart when their two-week pause ended Feb. 15. Krueger and seven players tested positive for COVID-19.

They’ve been downright terrible over the last month, struggling to score goals and defend. They’ve often showcased an alarming lack of passion and looked soft, buckling under the tiniest bit of adversity. Nearly every player is having a down season.

Krueger received criticism for not adapting his system to his players’ talents. For example, struggling winger Jeff Skinner, who has a history of goal scoring, has been relegated to the fourth line nearly all season. Krueger scratched him three consecutive games last month and even sent him to practice with the taxi squad.

When asked about his tenuous job status following Tuesday’s game, Krueger said he doesn’t “go there with my mind.”

“All I can say is I continue to enjoy doing this job, also in a difficult time,” he said on a Zoom call. “It’s easy to stand here when things are going well. It’s not that easy to stand here right now in this adversity. But I know we are learning and growing as an organization and we will take strength out of this in the future.”

Granato, 53, is the Sabres’ sixth coach in eight seasons. He’s in his fifth season as an NHL assistant. He has been a head coach in the AHL, ECHL and the United States Hockey League.