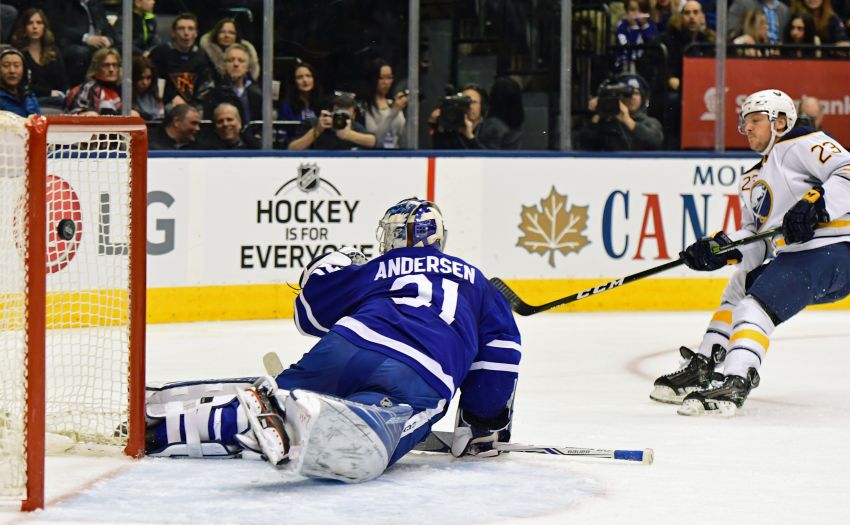 BUFFALO – When the NHL scheduled the only four tilts between the Sabres and the Toronto Maple Leafs over a 28-day late-season stretch, the league likely envisioned the fierce rivals would be battling for playoff spots or positioning.

Sixty-six games into another lost season, the last-place Sabres finally play the Leafs tonight at KeyBank Center, their first meeting since April 3, 2017.

The Sabres, of course, are playing for pride. The Leafs, meanwhile, are firmly positioned in the Atlantic Division’s third playoff spot.

Even the stars will be missing tonight.

A high right ankle sprain will sideline Jack Eichel, the Sabres’ slick center, for the 11th straight game. The Leafs will also be without their dynamic pivot, Auston Matthews, who’s battling a shoulder injury.

Sabres-Leafs games rarely disappoint. Sabres old and new know the rivalry means something, no matter where the teams are positioned. The atmosphere could be electric tonight, with the loud Leafs fans who gobble up tickets likely making up a majority of the raucous crowd.

Sabres winger Jason Pominville has been waiting a long time for tonight’s game. During his first stint in Buffalo, he experienced the rivalry at perhaps its peak following the 2005 lockout, when the Sabres consistently throttled the hapless Leafs.

After five seasons with the Minnesota Wild, Pominville will face the Leafs with the Sabres for the first time since March 21, 2013, a 5-4 Buffalo shootout win.

Before the NHL’s changed its scheduling format, Pominville played the Leafs eight times a season and later six. The veteran got used to seeing them all year. So waiting five months to face Toronto has been odd.

“I can’t believe it,” Pominville said. “It’s weird the way the schedule is built. In the past it feels like we have always played them late a little bit, but to have not played them at this point home or away is definitely different and something we’re not used to.

“For me, it’s been a while, so I’m interested to see if it’s still the same way where their fans manage to get tickets in here and be pretty loud. It should be a pretty good atmosphere.”

Until recently, the rivalry was pretty lopsided. The Sabres still lead the all-time series (113-67-18-8) by a significant margin.

One memory stands out to Pominville. When the teams met for the final time in 2005-06, Pominville’s rookie season – the playoff-bound Sabres went 6-1-1 against Toronto – tough guy Andrew Peters mimicked a golf swing on the ice during a 6-0 dismantling, a message the Leafs could get ready for the offseason.

“We won a lot of games,” Pominville said. “I do remember Petey’s golf swing at one point, that’s definitely something that made the guys laugh but that’s a while ago. There was a lot of battles, there was a lot of good games. We were able to win a lot.”

These days, the roles are reversed. The Leafs, who rebounded from a 30th-place finish to make the playoffs last season, have already accumulated 39 wins and 85 points. With 214 goals scored through 67 games, they rank fourth in scoring.

“They have three lines that can really hurt you every time they’re on the ice,” Sabres winger Kyle Okposo said. “They’re fourth line’s good, too. They have a lot of guys on any given night they can be the catalyst of their team.”

But they’ve struggled a bit recently, losing three straight games, including a 5-2 defeat in Saturday’s outdoor game against the Washington Capitals.

Following that loss, Leafs coach Mike Babcock essentially canceled a day off, saying his team would put the work in Sunday at practice in Buffalo they didn’t during the game.

“Just knowing where your opponent’s at, they lost the last three and the coach came out and they’re going to practice today, so we got to be well aware that they’re going to ready to go,” Sabres coach Phil Housley said.

Okposo said: “We know we’re going to get their best.”