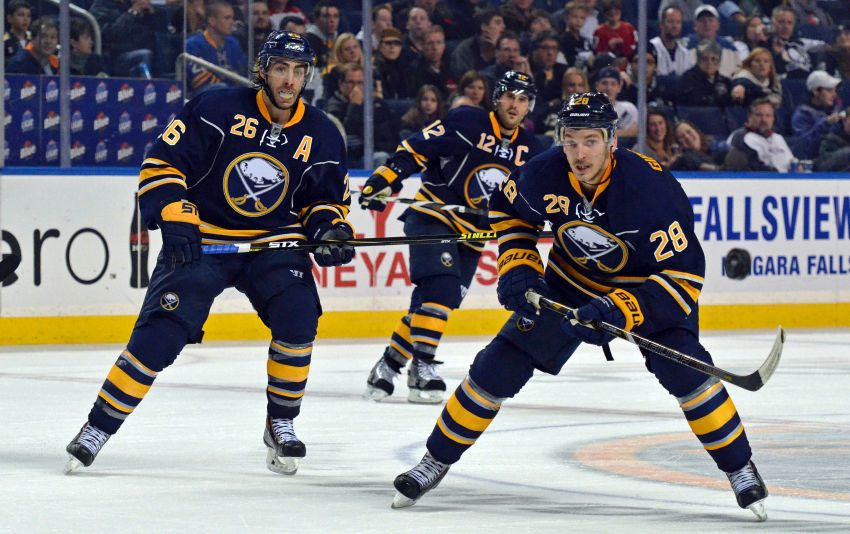 BUFFALO – Finally, more than a month into the season, the Sabres’ feeble offense has busted loose, scoring nine goals in the last two outings, including a season-high six in Saturday’s annihilation of Toronto.

The NHL’s weakest attack scored 19 goals in the first 17 games, so the last two contests have accounted for 32 percent of the Sabres’ offense this season.

The Sabres are scoring at a shocking 120-goal pace. That would be 30 fewer goals than last season, when they set the all-time low mark.

Still, the Sabres have been showcasing some steady progress entering tonight’s tilt against the San Jose Sharks inside the First Niagara Center. The offense hasn’t been a fluke.

Perhaps most importantly, the Sabres might have a top combination they can lean on. The trio of center Zemgus Girgensons and wingers Tyler Ennis and Matt Moulson looks like a legitimate No. 1 line.

“Those players lead the way for you,” Sabres coach Ted Nolan said Monday. “It took us a little while to find ours, but it looks like we got one going pretty good right now.”

The linemates have a combined six goals and 14 points since Nolan put them together three games ago (some points were accumulated on special teams).

“We have to score,” said Ennis, who has two goals and five points during a three-game point streak. “We’ve struggled to score this year as a team. Now they’re starting to come. It’s a lot more fun. We got to do that every single night.”

Nolan created that trio by moving some pieces around. Ennis, who played left wing earlier in his career, was the Sabres’ top center for almost a year. On a team with a dearth of talent down the middle, shifting your best asset to right wing was a bit risky.

So far, the move has paid off.

“I’m glad I’m back on the wing,” Ennis said. “I feel comfortable there. We’re making plays and having fun again.”

Nolan said the Sabres had to fix the offense themselves.

“We haven’t got the luxury of having players come from anywhere to help us,” Nolan said. “We got to help ourselves. That’s what we talked to the team about.”

He added: “I don’t think it was desperate.”

Why are the linemates meshing so well?

The tenacious Girgensons, a 20-year-old just 89 games into his career, has morphed into arguably the Sabres’ most reliable player.

The Latvian has been on a tear, compiling four goals and six points in the last five games. He scored twice Saturday.

“Just playing with those two guys is unbelievable, two great players that just create opportunities sometimes from nothing,” Girgensons said.

Some believe Girgensons, the No. 14 pick in 2012, could be taking the first steps into stardom.

“I think it’s just proof that hard work brings out success in people, and Z’s the hardest worker every night – he hits, he competes, he blocks the puck,” Ennis said. “He’s driven to be a great player. He’s really taken that next step, and he’s fun to be playing on a line with right now.”

Moulson added: “From where he was even last year … he seems to keep improving. He works extremely hard. It’s not a coincidence that he keeps getting better. He puts in a lot of time.”

After signing a five-year, $25 million deal July 1, nothing was going in early for Moulson, a three-time 30-goal scorer.

“I think at the start of the season you come in and put a lot of pressure on yourself,” Moulson said. “Personally, I know I did that. When things don’t go right, it kind of builds up mentally. I don’t think I was really playing my game, not playing well. I think the last couple games I’ve found that confidence, got that confidence back.”